Silicon (Si) is not considered an essential element, however, its tissue concentration can exceed that of many essential elements in several evolutionary distant plant species. Roots take up Si using Si transporters and then translocate it to aboveground organs. In some plant species, root tissues are also places where a high accumulation of Si can be found. Three basic modes of Si deposition in roots have been identified so far: (1) impregnation of endodermal cell walls (e.g., in cereals, such as Triticum (wheat)); (2) formation of Si-aggregates associated with endodermal cell walls (in the Andropogoneae family, which includes Sorghum and Saccharum (sugarcane)); (3) formation of Si aggregates in “stegmata” cells, which form a sheath around sclerenchyma fibers e.g., in some palm species (Phoenix (date palm)). In addition to these three major and most studied modes of Si deposition in roots, there are also less-known locations, such as deposits in xylem cells and intercellular deposits. In our research, the ontogenesis of individual root cells that accumulate Si is discussed. The documented and expected roles of Si deposition in the root is outlined mostly as a reaction of plants to abiotic and biotic stresses. View Full-Text
Keywords: abiotic and biotic stress; cell wall; endodermis; phytoliths; root; silicon; silicon transporters abiotic and biotic stress; cell wall; endodermis; phytoliths; root; silicon; silicon transporters
►▼ Show Figures 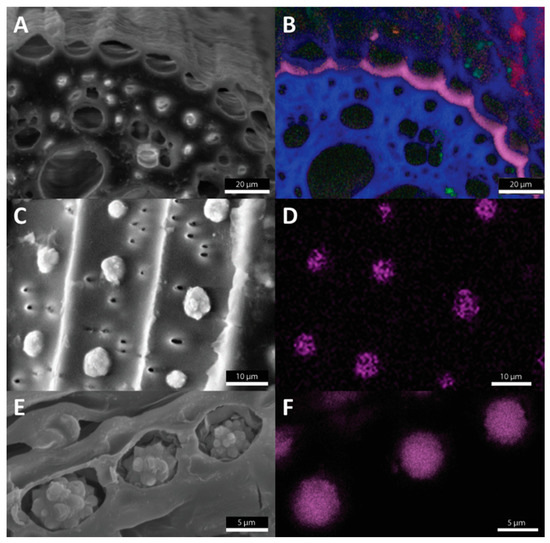