Toxic Effects of Single Antibiotics and Antibiotics in Combination on Germination and Growth of Sinapis alba L.

Antibiotics enter agro-ecosystems via the application of farmyard manure, sewage sludge, animal by-products, or digestates. There are many open questions regarding the behavior of such compounds in the soil like their adsorption, degradation, half-life, and their effects on soil organisms and plants. The impact of antibiotics on the development of antibiotic resistance genes in the environment is regarded as the most important effect that endangers the environment as well as human health. Nevertheless, direct plant toxicity, especially of different antibiotics and heavy metals at the same time, can be of importance as well. In the current study, commercially available phytotoxkits were tested with regard to the toxicity of single antibiotics and antibiotics in combination with the root growth of Sinapis alba L. Additionally, a pot trial was conducted to study the transfer of the observed phytotoxkits results in more complex systems. The phytotoxkits revealed direct toxicity of antibiotics on root development only at high concentrations. The highest toxicity was determined for sulfadiazine, followed by tetracycline and enrofloxacin, showing the least toxicity. When two antibiotics were tested at the same time in the phytotoxkit, synergistic effects were detected. The pot trial indicated lower effect concentrations for enrofloxacin than determined in the phytotoxkit and, therefore, to higher toxicity on plant growth. View Full-Text
Keywords: combinatory effects; copper (Cu); enrofloxacin; phytotoxicity; Sinapis alba L.; sulfadiazine; tetracycline combinatory effects; copper (Cu); enrofloxacin; phytotoxicity; Sinapis alba L.; sulfadiazine; tetracycline
►▼ Show Figures 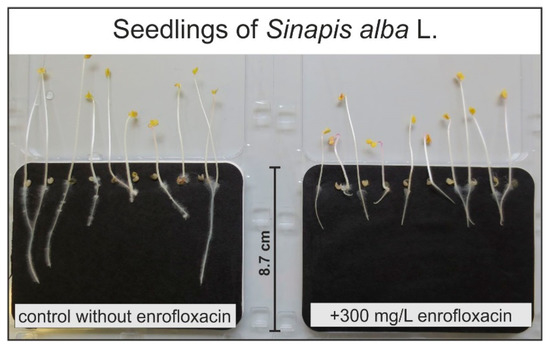