Glyphosate is a cheap herbicide that has been used to control a wide range of weeds (4–6 times/year) in citrus groves of the Gulf of Mexico; however, its excessive use has selected for glyphosate-resistant weeds. We evaluated the efficacy and economic viability of 13 herbicide treatments (glyphosate combined with PRE- and/or POST-emergence herbicides and other alternative treatments), applied in tank-mixture or sequence, to control glyphosate-resistant weeds in two Persian lime groves (referred to as SM-I and SM-II) of the municipality of Acateno, Puebla, during two years (2014 and 2015). The SM-I and SM-II fields had 243 and 346 weeds/m2, respectively, composed mainly of Bidens pilosa and Leptochloa virgata. Echinochloa colona was also frequent in SM-II. The glyphosate alone treatments (1080, 1440, or 1800 g ae ha−1) presented control levels of the total weed population ranging from 64% to 85% at 15, 30, and 45 d after treatment (DAT) in both fields. Mixtures of glyphosate with grass herbicides such as fluazifop-p-butyl, sethoxydim, and clethodim efficiently controlled E. colona and L. virgata, but favored the regrowth of B. pilosa. The sequential applications of glyphosate + (bromacil + diuron) and glufosinate + oxyfluorfen controlled more than 85% the total weed community for more than 75 days. However, these treatments were between 360% and 390% more expensive (1.79 and 1.89 $/day ha−1 of satisfactory weed control, respectively), compared to the representative treatment (glyphosate 1080 g ae ha−1 = USD $29.0 ha−1). In practical and economic terms, glufosinate alone was the best treatment controlling glyphosate resistant weeds maintaining control levels >80% for at least 60 DAT ($1.35/day ha−1). The rest of the treatments, applied in tank-mix or in sequence with glyphosate, had similar or lower control levels (~70%) than glyphosate at 1080 g ae ha−1. The adoption of glufosiante alone, glufosinate + oxyfluorfen or glyphosate + (bromacil + diuron) must consider the cost of satisfactory weed control per day, the period of weed control, as well as other factors associated with production costs to obtain an integrated weed management in the short and long term. View Full-Text
Keywords: Citrus latifolia; hairy beggarticks; integrated weed management; junglerice; tropical sprangletop Citrus latifolia; hairy beggarticks; integrated weed management; junglerice; tropical sprangletop
►▼ Show Figures 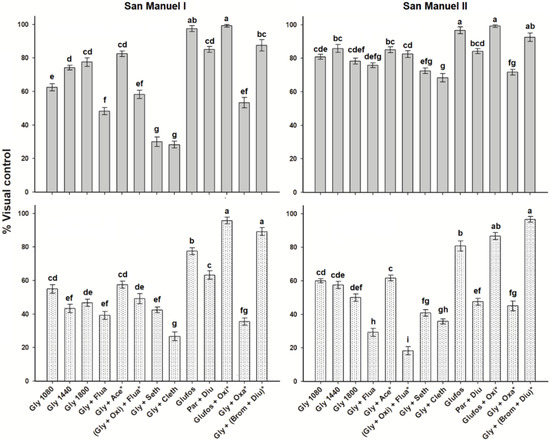