Effect of Oxygen Plasma on Sprout and Root Growth, Surface Morphology and Yield of Garlic
Next Article in Special Issue

Arabinogalactan-Proteins from the Liverwort Marchantia polymorpha L., a Member of a Basal Land Plant Lineage, Are Structurally Different to Those of Angiosperms
Previous Article in Special Issue

Distribution and Community Assembly of Trees Along an Andean Elevational Gradient

DNA barcoding has been used as a universal tool for phylogenetic inferences and diversity assessments, especially in poorly studied species and regions. The aim of this study was to contrast morphological taxonomy and DNA barcoding, using the three frequently used markers matK, rbcL, and trnL-F, to assess the efficiency of DNA barcoding in the identification of dipterocarps in Sumatra, Indonesia. The chloroplast gene matK was the most polymorphic among these three markers with an average interspecific genetic distance of 0.020. The results of the molecular data were mostly in agreement with the morphological identification for the clades of Anthoshorea, Hopea, Richetia, Parashorea, and Anisoptera, nonetheless these markers were inefficient to resolve the relationships within the Rubroshorea group. The maximum likelihood and Bayesian inference phylogenies identified Shorea as a paraphyletic genus, Anthoshorea appeared as sister to Hopea, and Richetia was sister to Parashorea. A better discriminatory power among dipterocarp species provided by matK and observed in our study suggests that this marker has a higher evolutionary rate than the other two markers tested. However, a combination of several different barcoding markers is essential for reliable identification of the species at a lower taxonomic level. View Full-Text
Keywords: matK; rbcL; trnL-F; Dipterocarpoideae; tropical tree diversity; genetic distance; reference DNA library matK; rbcL; trnL-F; Dipterocarpoideae; tropical tree diversity; genetic distance; reference DNA library
►▼ Show Figures 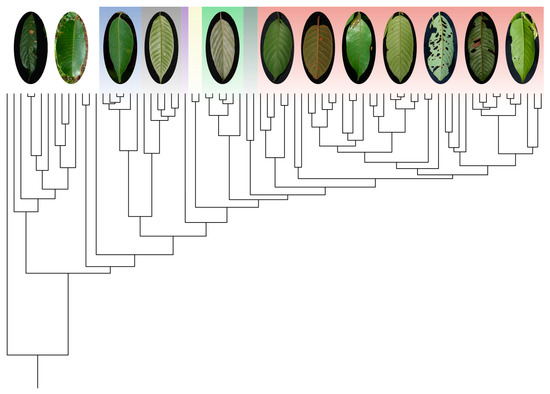