A population of eight open pollinated families of Pinus contorta was selected from sites varying in precipitation regimes and elevation to examine the possible role of aquaporins in adaptation to different moisture conditions. Five Pinus contorta aquaporins encoding PiconPIP2;1, PiconPIP2;2, PiconPIP2;3, PiconPIP1;2, and PiconTIP1;1 were cloned and detailed structural analyses were conducted to provide essential information that can explain their biological and molecular function. All five PiconAQPs contained hydrophilic aromatic/arginine selective filters to facilitate the transport of water. Transcript abundance patterns of PiconAQPs varied significantly across the P. contorta families under varying soil moisture conditions. The transcript abundance of five PiconPIPs remained unchanged under control and water-stress conditions in two families that originated from the sites with lower precipitation levels. These two families also displayed a different adaptive strategy of photosynthesis to cope with drought stress, which was manifested by reduced sensitivity in photosynthesis (maintaining the same rate) while exhibiting a reduction in stomatal conductance. In general, root:shoot ratios were not affected by drought stress, but some variation was observed between families. The results showed variability in drought coping mechanisms, including the expression of aquaporin genes and plant biomass allocation among eight families of Pinus contorta. View Full-Text
Keywords: aquaporins; drought; Pinus contorta; transcript abundance; photosynthesis; stomatal conductance; water use efficiency aquaporins; drought; Pinus contorta; transcript abundance; photosynthesis; stomatal conductance; water use efficiency
►▼ Show Figures 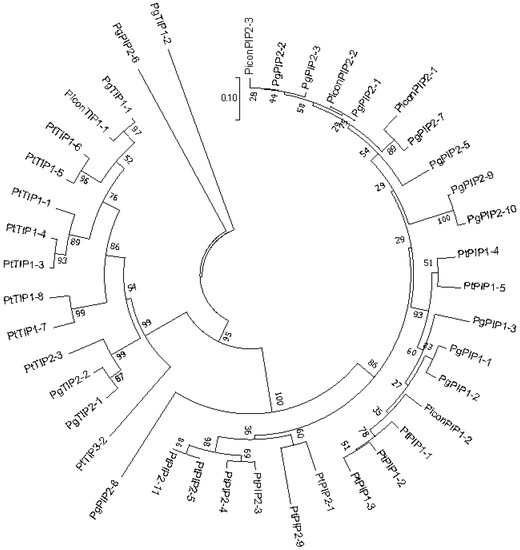