:
High temperatures are a significant stress factor for plants. In fact, many biochemical reactions involved in growth and development are sensitive to temperature. In particular, heat stress (HS) represents a severe issue for plant productivity and strategies to obtain high yields under this condition are important goals in agriculture. While selenium (Se) is a nutrient for humans and animals, its role as a plant micronutrient is still questioned. Se can prevent several abiotic stresses (drought, heat, UV, salinity, heavy metals), but the action mechanisms are poorly understood. Se seems to regulate reactive oxygen species (ROS) and to inhibit heavy metals transport. In addition, it has been demonstrated that Se is essential for a correct integrity of cell membranes and chloroplasts, especially the photosynthetic apparatus. Previous results showed that in tobacco (Nicotiana tabacum cv. Bright-Yellow 2) cultures HS (5 min at 50 °C) induced cell death with apoptotic features, accompanied by oxidative stress and changes in the levels of stress-related proteins. In this work we investigated the effect of Se on the responses induced by HS. The obtained results show that Se markedly reduces the effects of HS on cell vitality, cytoplasmic shrinkage, superoxide anion production, membrane lipids peroxidation, activity of caspase-3-like proteases, and the levels of some stress-related proteins (Hsp90, BiP, 14-3-3s, cytochrome c).
Keywords:
cell death; heat stress; plant cell cultures; selenium; tobacco BY-2

2.1. HS and Se Effects on Cell Viability and Cytoplasmic Shrinkage

2.2. HS and Se Effects on Accumulation of O2.− and MDA and on Caspase-3-like Activity

O2.− is a highly reactive ROS, responsible for important oxidative damage [21]. Treatment with HS (Figure 3) causes a progressive accumulation of O2.−. This accumulation is almost totally prevented by Se, at least for the first experimental times (up to 4 h).
At cell level, peroxidation of membrane lipids is one of the main damages induced by oxidative stress and its degree was assessed by determining the level of malondialdehyde (MDA), a byproduct of polyunsaturated fatty acids oxidation, which typically originates after oxidative stress [21]. Figure 4 shows that the level of MDA of the control cells is low, constant, and not influenced by Se. At each time, HS causes a considerable production of MDA, significantly decreased by Se.
To characterize further the effect of Se on HS-elicited cell death we analysed caspase3-like proteases activity, another typical PCD marker that often increases during plant PCD. Figure 5 shows that Se strongly reduces the HS-elicited marked increase in this activity.

Finally, we analysed the effect of HS and Se on the levels of some stress-related proteins by gel blotting. Mitochondrial Hsp 90 are molecular chaperones that control the activity of different substrates. BiP, an Hsp70 present in the endoplasmic reticulum, accumulates under different stress conditions. The regulatory proteins 14-3-3s control many processes of plant cells, including cell death and cytochrome c release from the mitochondrion to the cytosol, a marker of apoptotic death in animals and plants [21].
Figure 6 confirms the previously reported effects of HS on the examined proteins [21], and shows that at both times Se diminishes the accumulation of microsomal BiP and almost completely prevents the accumulation of cytosolic 14-3-3s, the reduction of mitochondrial Hsp90 and the release of cytochrome c from mitochondria elicited by HS.

The influence of selenium on the HS-elicited responses of tobacco cells was tested by measuring in the absence and presence of Na-selenate the following parameters: cell viability, cytoplasmic shrinkage, superoxide anion production, membrane lipids peroxidation, activity of caspase-3-like proteases, and the levels of some stress-related proteins (Hsp90, BiP, 14-3-3s, cytochrome c).

3.1. HS and Se Effects on Cell Viability and Cytoplasmic Shrinkage.

This work (Figure 1 and Figure 2) shows that Se strongly reduces the previously reported eliciting effect of HS on cell death and cytoplasmic shrinkage [6].
At proper concentrations, Se promotes growth, delays plant senescence, and precocious fruit ripening induced by different abiotic stresses, HS included [13]. Leaf and fruit senescence are processes involving programmed cell death, and when not precisely regulated can lead to important decreases in productivity in several horticultural species. The protective effect of Se against inappropriate senescence could be due to its reported ability to reduce respiratory intensity and ethylene production in different plant species [13]. Interestingly, the inhibitor of ethylene production Co2+ prevents cell death and cytoplasmic shrinkage induced by HS in tobacco cell cultures [6].

3.2. HS and Se Effects on O2−. and Malondialdehyde Accumulations.

The HS-elicited oxidative stress with accumulation of O2.− and malondialdehyde is largely inhibited by Se (Figure 3 and Figure 4). Similar results have been recently obtained in cucumber plants under HS and in Zea mays exposed to water stress where stress-induced accumulations of O2.− and MDA are prevented by Se [22,23]. These results are not surprizing. In fact, Se acts as an antioxidant in different plant species under biotic and abiotic stresses. This protective effect of Se depends on the induced higher activity of several antioxidant enzymes and on the increased content of some antioxidant compounds (glutathione and flavonoids) [11,13].

3.3. HS and Se Effects on Caspase-3-like Activity and on Cytochrome c Release

Specific cysteine proteases named caspases are required for the progression of animal apoptosis. In plant cells too there are proteins with similar activity called caspases-like or metacaspases [6]. Se (Figure 5) largely prevents the HS-elicited increase in the activity of these enzymes, reported in our previous work [21]. Another ubiquitous marker of apoptotic-like PCD related to caspases is the release of cytochrome c from the mitochondrion [6]. We previously reported induction of cytochrome c release by HS [6,21]. Here we show that this release is markedly reduced by Se (Figure 6). These protective effects of Se can be due to its antioxidant effect (ROS are potent regulators of PCD) or to the effect of Se on expression of genes implied in antioxidant activity and defense responses ([11] and see below for further discussion).

As widely reported, plants evolved a set of responses to deal with HS, that includes changes of biochemical and physiological processes due to modifications of gene expression. These modifications can result in acclimation or adaptation to stress [24]. In this investigation, we studied the HS and Se effects on some stress-related proteins. Our data confirm the previously reported effects of HS on the examined proteins [21] and show that Se diminishes the accumulation of BiP and almost completely prevents the accumulation of 14-3-3s and the reduction of Hsp90 elicited by HS (Figure 6).
To our knowledge, a genomic approach has scarcely been used to study the protective role of Se against stresses. Sun and co-workers performed a comparative proteomics analysis on cucumber plants treated with Cd [25]. Comparing 2-DE gels, these researchers observed several protein spots changed by Se+Cd compared to Cd alone. By MALDI–TOF–MS mass spectrometry, they identified proteins whose relative abundance was significantly reduced by Cd and restored by Se. Among the others, ascorbate oxidase, glutathione-S-transferase and Hsp STI-like expression were strongly reduced by Cd and reincreased by Se [25]. More studies were conducted on the Se effect on the proteome of different plant species. For example, Wang and co-workers by 2-DE gels and MALDI-TOF/TOF mass spectrometry performed a comparative proteomics analysis on the effect of different Se concentrations on rice seedlings [19]. Their results showed that low (non-toxic) Se concentrations up-regulate proteins involved in ROS detoxification and resistance to pathogens such as beta-1,3-glucanase and chitinase. The expression of the same proteins was down-regulated by high (toxic) Se concentrations [19]. Finally, the Se hyperaccumulator Stanleya pinnata shows higher expression of genes involved in sulphur uptake and assimilation, antioxidant activities and defense compared to the related secondary Se accumulator Stanleya albescens [26]. In particular, the hyperaccumulator species shows a higher expression than the related species for genes encoding Hsp and luminal chaperones such as BiP both in the absence and in the presence of Se [26].

Cell death was estimated spectrophotometrically with the vital dye Evans Blue as in Reference [21]. The percentage of cells showing cytoplasmic shrinkage was determined as in Reference [6].

The O2.− anion generation was evaluated spectrophotometrically as reduction of XTT to XTT formazan as described [21].

Cells were collected by gentle centrifugation, frozen in liquid nitrogen and homogenized for 5 min at maximum speed with a Ultra-Turrax T25 device. The cell homogenate was differentially centrifuged to obtain the different fractions (i.e., mitochondrial, microsomal and soluble) for SDS-PAGE analysis as described [21].
Equal amounts of proteins were separated by discontinuous SDS-PAGE (4% stacking, 10% resolving gel) as described [21]. Immunodecorations of cytochrome c, 14-3-3 proteins, Hsp 90 and BiP were perfomed as described [21].

To summarize, Se can effectively reduce the effect of HS on cell death with apoptotic features, oxidative stress and levels of stress-related proteins. This protective effect of Se can be due to its direct antioxidant effect and/or to an effect on the expression of genes implied in antioxidant activity and defense responses. In the future, molecular and genomic studies could be valuable to elucidate the mechanisms associated with the protective effect of Se against heat stress in cell cultures as well as in plants.

Financial support of the University of Milano-Bicocca, Fondo d’Ateneo per la Ricerca, is acknowledged. 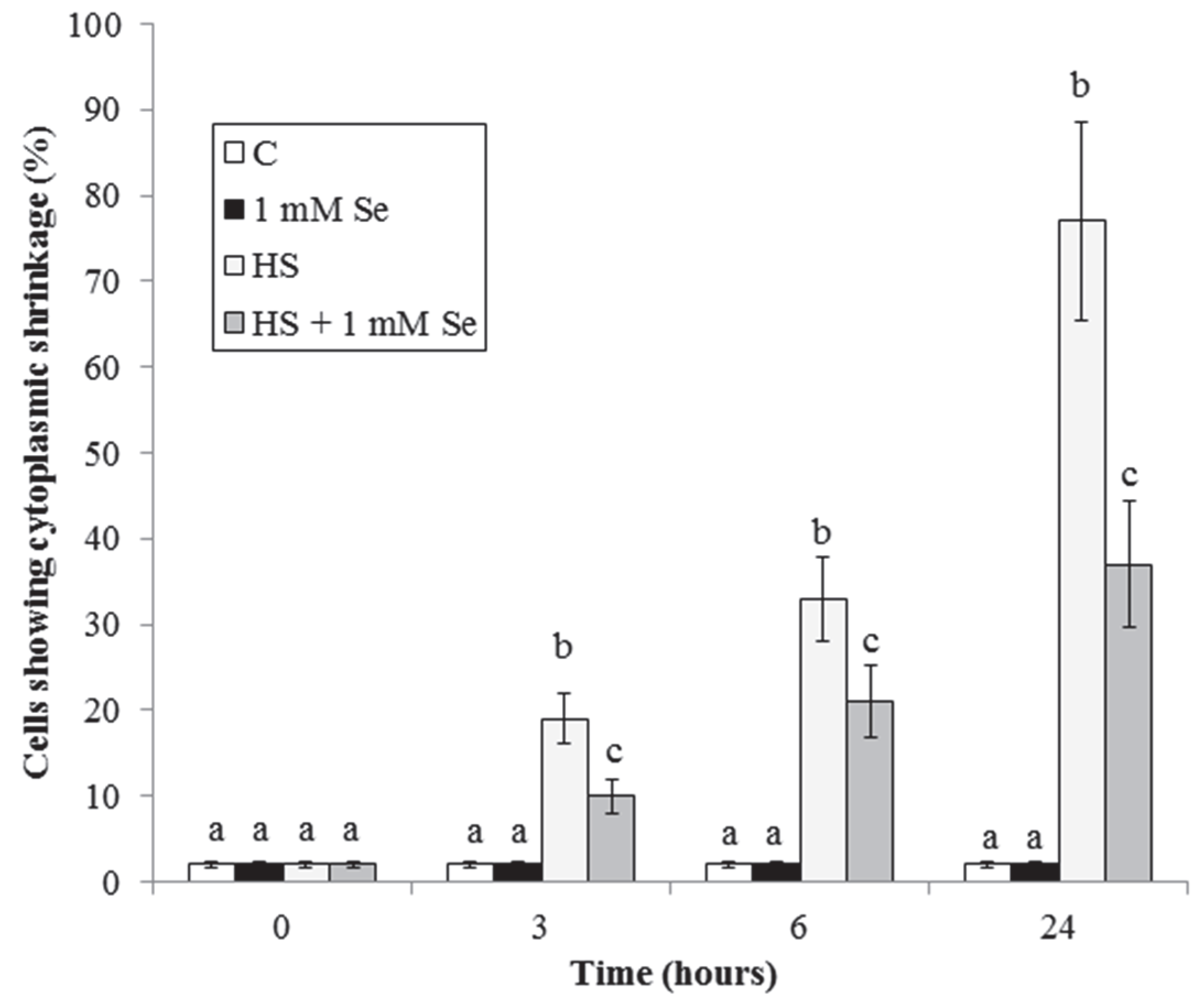 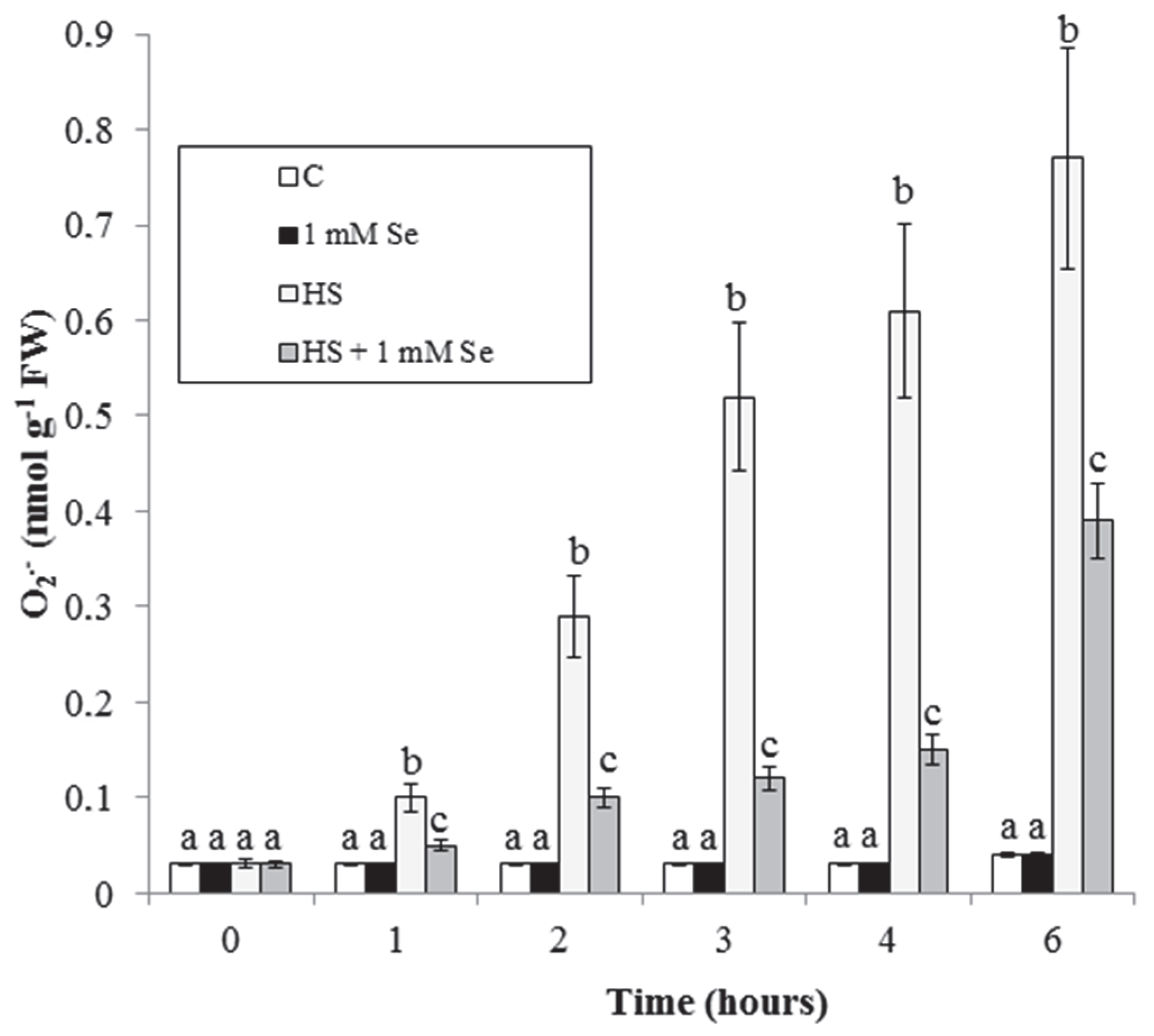 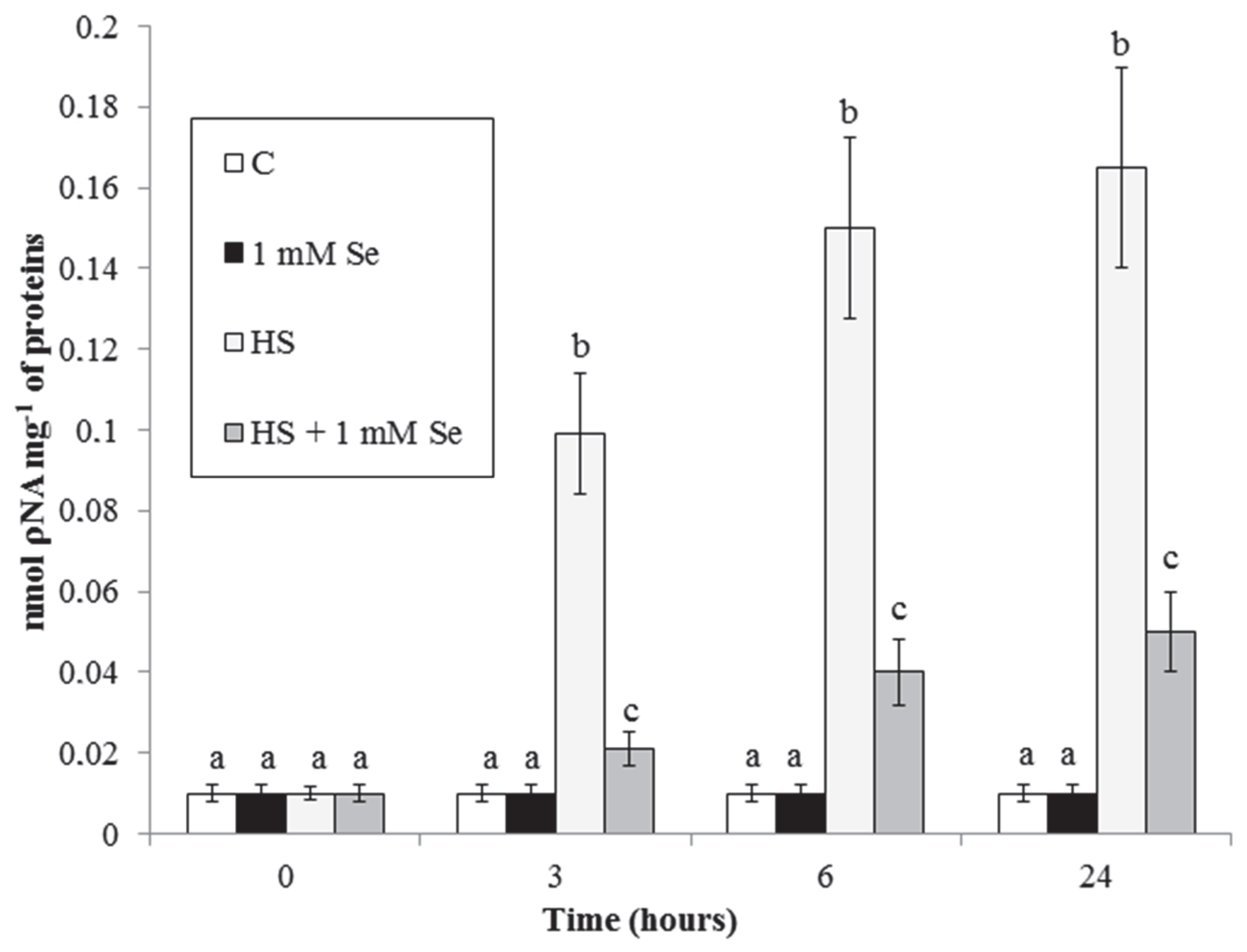 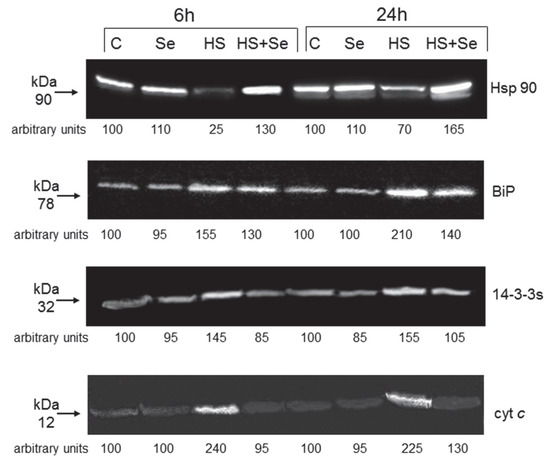