Peru is a megadiverse country with native species of all kinds, including dye plants, which have been used for hundreds of years by the local population. Despite the fact that many of these natural dyes are of a superior quality compared to synthetic ones and do not have the harmful effects that the latter may cause to human health, due to the lack of documentation and dissemination, ethnobotanical knowledge is unfortunately being lost with the passing of generations. In order to preserve and spread such valuable knowledge, this study conducted a comprehensive taxonomic, phytogeographic, and ethnobotanical inventory of dye plants based on periodical botanical explorations in selected locations of Northern Peru during the span of two decades. A critical review of the specialized bibliography was then carried out and the findings were verified with the personal knowledge and experience of both the researchers and the local and regional people. The results of the inventory record 32 species of dye plants from Northern Peru distributed in 22 families, of which the following stand out due to the number of species: Fabaceae (5), Anacardiaceae (2), Annonaceae (2), Asteraceae (2), Berberidaceae (2), Rosaceae (2), and Solanaceae (2). Of the 32 dye species identified, four are considered endemic from Peru: Berberis buceronis J.F. Macbr., Caesalpinia paipai Ruiz & Pav., Coreopsis senaria S.F. Blake & Sherf., and Lomatia hirsuta (Lam.) Diels. The study also found that species such as Bixa orellana L., Indigofera suffruticosa Mill., Sambucus peruviana, and the lichen Usnea baileyi (Stirton) Zahlbr have not been commercially exploited in Peru despite the fact that they already constitute a great economic source for several countries. View Full-Text
Keywords: taxonomic inventory; botanical explorations; Herbarium Truxillense; endemic species; Andes Mountains taxonomic inventory; botanical explorations; Herbarium Truxillense; endemic species; Andes Mountains
►▼ Show Figures 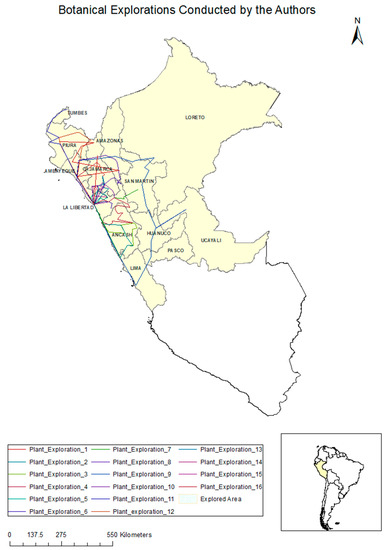