High Temperature Alters Anthocyanin Concentration and Composition in Grape Berries of Malbec, Merlot, and Pinot Noir in a Cultivar-Dependent Manner

Climate is determinant for grapevine geographical distribution, berry attributes, and wine quality. Due to climate change, a 2–4 °C increase in mean diurnal temperature is predicted by the end of the century for the most important Argentine viticulture region. We hypothesize that such temperature increase will affect color intensity and other quality attributes of red grapes and wines. The present study investigated the effect of high temperature (HT) on anthocyanin concentration and composition, pH, and resveratrol and solids content in berries of three major wine-producing varieties during fruit ripening in two seasons. To this end, a structure that increased mean diurnal temperature by 1.5–2.0 °C at berry sites, compared to Control (C) plants grown without such structure, was implemented in field grown vineyards of Malbec, Merlot, and Pinot Noir. Results revealed a cultivar-dependent response to HT conditions, with Malbec and Pinot Noir berries exhibiting significant decreases in total anthocyanin concentration (TAC) at veraison and harvest, respectively, while Merlot maintained an unaffected pigment content under HT. The decrease in TAC was associated with reduced levels of delphinidin, cyanidin, petunidin, peonidin, and malvidin glycosides, and increased ratios of acylated (AA)/non-acylated anthocyanins (NAA), suggesting pigment acylation as a possible stress-response mechanism for attenuating HT negative effects. Under HT, Pinot Noir, which does not produce AA, was the only cultivar with lower TAC at harvest (p < 0.05). pH, resveratrol, and solids content were not affected by HT. Our results predict high, medium, and low plasticity with regard to color quality attributes for Malbec, Merlot, and Pinot Noir, respectively, in the context of climate change. View Full-Text
Keywords: grapevine; climate change; high temperatures; anthocyanins; Malbec; Merlot; Pinot Noir grapevine; climate change; high temperatures; anthocyanins; Malbec; Merlot; Pinot Noir
►▼ Show Figures 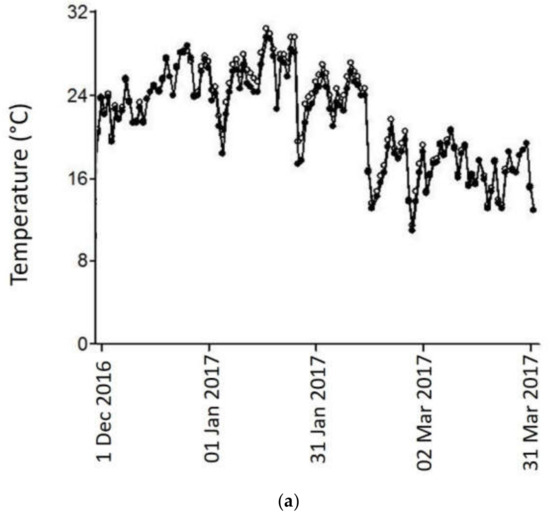