Crop growth monitoring is an important component of agricultural information, and suitable soil temperature (ST), soil moisture content (SMC) and soil electrical conductivity (SEC) play a key role in crop growth. Real-time monitoring of the three soil parameters to predict the growth of tea plantation helps tea trees grow healthily and to accurately grasp the growth trend of tea trees. In this paper, five different models based on the polynomial model and power model were used to construct the soil temperature, soil water content and soil conductivity and tea plantation growth monitoring models. Experiments proved that tea plantation growth were positively correlated with ST and negatively correlated with SMC and SEC, and among the constructed models, the ternary cubic polynomial model was the best, and R square (R2) of the constructed models were 0.6369, 0.4510 and 0.5784, respectively, indicating that SEC was the most relevant to tea plantation growth maximum. To improve the prediction accuracy, a model based on sum of soil temperature (SST), sum of soil water content (SSMC) and sum of soil conductivity (SSEC) was proposed, and the experiments also showed that the ternary cubic polynomial model was the best, with 0.9638, 0.9733 and 0.9660, respectively. At the same time, a model incorporating three parameters such as soil temperature, soil water content and soil conductivity was also suggested, with 0.6605 and 0.9761, respectively, which effectively improved the prediction accuracy. Validation experiments were conducted. Twelve data sets were utilized to verify the performance of the model. The experiments showed that the regressions in the polynomial models achieved a better prediction effect. Finally, a long short-term memory (LSTM) network prediction model optimized by the bald eagle search algorithm (BES) was also constructed, and R2, root mean square error (RMSE), mean squared error (MSE), mean absolute error (MAE) and mean absolute percentage error (MAPE) of prediction were 0.8666, 0.0629, 0.0040, 0.0436 and 10.5257, respectively, which significantly outperformed the LSTM network and achieved better performance. The model proposed in this paper can be used to predict the actual situation during the growing period of tea leaves, which can improve the production management of tea plantations and also provide a scientific basis for accurate tea planting and a decision basis for agricultural policy formulation, as well as provide technical support for the realization of agricultural modernization. View Full-Text
Keywords: crop growth model; soil indicators; normalized difference vegetation index (NDVI); long short-term memory (LSTM) crop growth model; soil indicators; normalized difference vegetation index (NDVI); long short-term memory (LSTM)
►▼ Show Figures 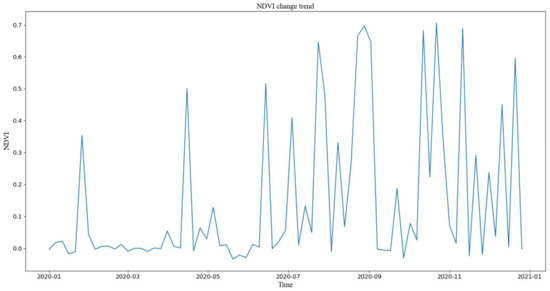