Species Delimitation and Conservation in Taxonomically Challenging Lineages: The Case of Two Clades of Capurodendron (Sapotaceae) in Madagascar

Capurodendron is the largest endemic genus of plants from Madagascar, with around 76% of its species threatened by deforestation and illegal logging. However, some species are not well circumscribed and many of them remain undescribed, impeding a confident evaluation of their conservation status. Here we focus on taxa delimitation and conservation of two species complexes within Capurodendron: the Arid and Western complexes, each containing undescribed morphologies as well as intermediate specimens alongside well-delimited taxa. To solve these taxonomic issues, we studied 381 specimens morphologically and selected 85 of them to obtain intergenic, intronic, and exonic protein-coding sequences of 794 nuclear genes and 227 microsatellite loci. These data were used to test species limits and putative hybrid patterns using different approaches such as phylogenies, PCA, structure analyses, heterozygosity level, FST, and ABBA-BABA tests. The potential distributions were furthermore estimated for each inferred species. The results show that the Capurodendron Western Complex contains three well-delimited species, C. oblongifolium, C. perrieri, and C. pervillei, the first two hybridizing sporadically with the last and producing morphologies similar to, but genetically distinct from C. pervillei. The Arid Complex shows a more intricate situation, as it contains three species morphologically well-delimited but genetically intermixed. Capurodendron mikeorum nom. prov. is shown to be an undescribed species with a restricted distribution, while C. androyense and C. mandrarense have wider and mostly sympatric distributions. Each of the latter two species contains two major genetic pools, one showing interspecific admixture in areas where both taxa coexist, and the other being less admixed and comprising allopatric populations having fewer contacts with the other species. Only two specimens out of 172 showed clear genetic and morphological signals of recent hybridization, while all the others were morphologically well-delimited, independent of their degree of genetic admixture. Hybridization between Capurodendron androyense and C. microphyllum, the sister species of the Arid Complex, was additionally detected in areas where both species coexist, producing intermediate morphologies. Among the two complexes, species are well-defined morphologically with the exception of seven specimens (1.8%) displaying intermediate patterns and genetic signals compatible with a F1 hybridization. A provisional conservation assessment for each species is provided. View Full-Text
Keywords: conservation; current speciation; hybridization; species complex; species delimitation conservation; current speciation; hybridization; species complex; species delimitation
►▼ Show Figures 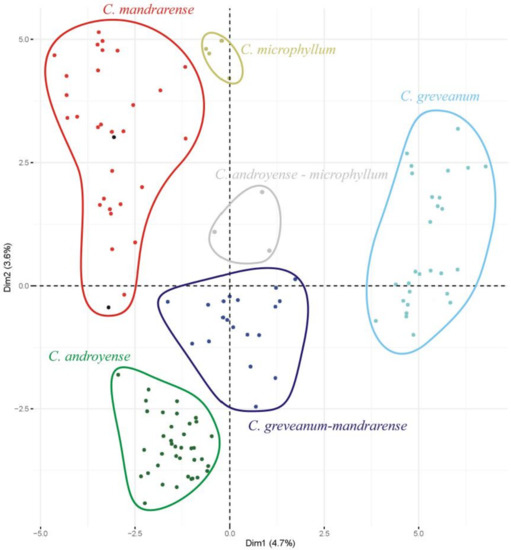