In Vitro Production and Exudation of 20-Hydroxymaytenin from Gymnosporia heterophylla (Eckl. and Zeyh.) Loes. Cell Culture
Next Article in Special Issue

Based on results from previous studies, populations of the Iberian endemic Centaurea podospermifolia north of the Ebro River are considered genetically pure, while those southward are introgressed, with genetic input from C. cephalariifolia. This phenomenon is particularly relevant, especially given both the endangered and protected status for the species, which can have consequences in how to best apply conservation strategies to maintain genetic resources in the species. The main goal of this study was to evaluate whether genome size assessments using flow cytometry can help distinguishing between pure, hybrid and introgressed populations, and hence become a powerful and cost-effective tool to complement comprehensive population genetic surveys. The results indicate that there are significant genome size differences between populations of C. podospermifolia, which are coincident with previous considerations of pure and introgressed populations. Given the simplicity and reproducibility of this technique, flow cytometry could become an effective tool for monitoring pure populations of this species and, indeed, become an integral part of the management plans that are mandatory for listed taxa. View Full-Text
Keywords: Centaurea cephalariifolia; Centaurea podospermifolia; Centaurea ×loscosii; conservation; genome size; hybridisation; introgression Centaurea cephalariifolia; Centaurea podospermifolia; Centaurea ×loscosii; conservation; genome size; hybridisation; introgression
►▼ Show Figures 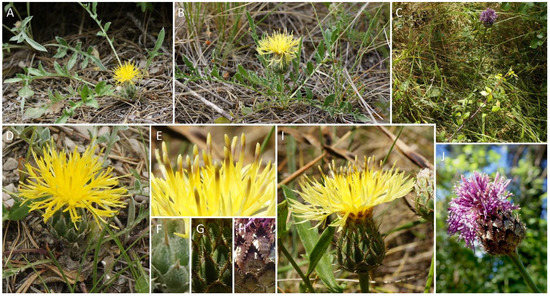