Water Use Efficiency in Popcorn (Zea mays L. var. everta): Which Physiological Traits Would Be Useful for Breeding?
Previous Article in Special Issue

This study delves into the diagnosis of pin nematodes (Paratylenchus spp.) in Spain based on integrative taxonomical approaches using 24 isolates from diverse natural and cultivated environments. Eighteen species were identified using females, males (when available) and juveniles with detailed morphology-morphometry and molecular markers (D2-D3, ITS and COI). Molecular markers were obtained from the same individuals used for morphological and morphometric analyses. The cryptic diversity using an integrative taxonomical approach of the Paratylenchus straeleni-species complex was studied, consisting of an outstanding example of the cryptic diversity within Paratylenchus and including the description of a new species, Paratylenchus parastraeleni sp. nov. Additionally, 17 already known species were identified comprising P. amundseni, P. aciculus, P. baldaccii, P. enigmaticus, P. goodeyi, P. holdemani, P. macrodorus, P. neoamblycephalus, P. pandatus, P. pedrami, P. recisus, P. sheri, P. tateae, P. variabilis, P. veruculatus, P. verus, and P. vitecus. Eight of these species need to be considered as first reports for Spain in this work (viz. P. amundseni, P. aciculus, P. neoamblycephalus, P. pandatus, P. recisus, P. variabilis, P. verus and P. vitecus). Thirty-nine species of Paratylenchus have been reported in Spain from cultivated and natural ecosystems. Although we are aware that nematological efforts on Paratylenchus species in Southern Spain have been higher than that carried out in central and northern part of the country, the present distribution of the genus in Spain, with about 90% of species (35 out of 39 species, and 24 of them confirmed by integrative taxonomy) only reported in Southern Spain, suggest that this part of the country can be considered as a potential hotspot of biodiversity. View Full-Text
Keywords: cytochrome c oxidase subunit 1; ITS rRNA; D2-D3 of 28S rRNA; molecular; morphology; phylogeny; rRNA; taxonomy cytochrome c oxidase subunit 1; ITS rRNA; D2-D3 of 28S rRNA; molecular; morphology; phylogeny; rRNA; taxonomy
►▼ Show Figures 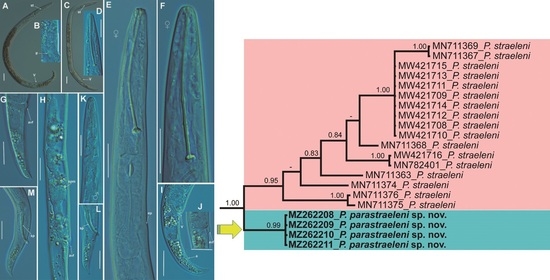