Beans (Phaseolus vulgaris L.) are an important source of proteins, carbohydrates, and micronutrients in the diets of millions of people in Latin America and Africa. Studies related to genetic variability in the accumulation and distribution of nutrients are valuable for biofortification programs, as there is evidence that the seed coat and embryo differ in the bioavailability of essential nutrients. In this study, we sought to evaluate the genetic variability of total mineral content in the grain and its constituent parts (seed coat, cotyledon, and embryonic axis) of bean genotypes from Mesoamerican and Andean centers of origin. Grain samples of 10 bean cultivars were analyzed for the content of proteins and minerals (Mg, Ca, K, P, Mn, S, Cu, B, Fe, and Zn) in the whole grains and seed coat, cotyledons, and embryonic axis tissues. Genetic variability was observed among the cultivars for protein content and all evaluated minerals. Moreover, differential accumulation of minerals was observed in the seed coat, cotyledons, and embryonic axis. Except for Ca, which accumulated predominantly in the seed coat, higher percentages of minerals were detected in the cotyledons. Furthermore, 100-grain mass values showed negative correlations with the contents of Ca, Mg, P, Zn, Fe, and Mn in whole grains or in the different grain tissues. In general, the Mesoamerican cultivars showed a higher concentration of minerals in the grains, whereas Andean cultivars showed higher concentrations of protein. View Full-Text
Keywords: Phaseolus vulgaris L.; biofortification; macronutrient; micronutrient; protein Phaseolus vulgaris L.; biofortification; macronutrient; micronutrient; protein
►▼ Show Figures 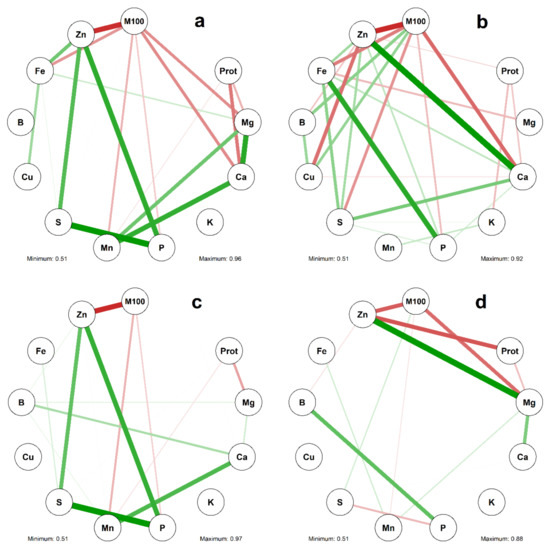