Influence of Land Use on the C and N Status of a C4 Invasive Grass in a Semi-Arid Region: Implications for Biomonitoring

Biomonitoring of atmospheric pollution is an increasingly accepted practice. However, most existing biomonitors are usually epiphytic species from mesic environments. This work assessed the suitability of buffelgrass (Cenchrus ciliaris), an invasive C4 grass in northwestern Mexico, as a biomonitor, by means of the spatial distribution of the carbon and nitrogen content and isotopic signatures for grass samples collected from urban, agricultural, and natural areas throughout the state of Sonora. We found the highest tissue carbon content of 45.6% (on a dry weight basis) and highest nitrogen content of 3.31% for buffelgrass from the Yaqui Valley. We also found the lowest δ13C of −15.9‰, and the highest δ15N of 16.7‰ in the same region. In contrast, the lowest carbon and nitrogen content of 39.4 and 1.49% were found for Bahía de Kino and Río Sonora mountains, respectively. The lowest δ15N of 2.18‰ and the highest δ13C of −13.7‰ were measured for two remote locations. These results show the influence that pollutant emissions, including agriculture and transportation, have on elemental and isotopic composition of vegetation. Buffelgrass is most adequate for tracking carbon and nitrogen emissions in arid environments and for determining alterations on nitrogen soil reactions, as a first approximation for saturation. View Full-Text
Keywords: biomonitoring; carbon emissions; environmental pollution; global ecology; nitrogen deposition; stable isotopes biomonitoring; carbon emissions; environmental pollution; global ecology; nitrogen deposition; stable isotopes
►▼ Show Figures 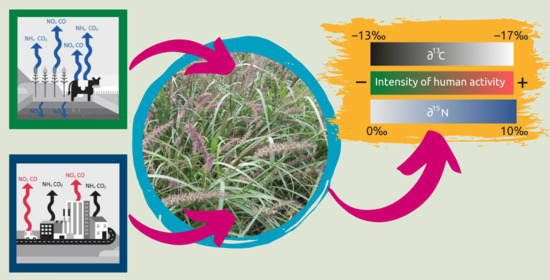