Development of SNP Set for the Marker-Assisted Selection of Guar (Cyamopsis tetragonoloba (L.) Taub.) Based on a Custom Reference Genome Assembly

Guar gum, a polysaccharide derived from guar seeds, is widely used in a variety of industrial applications, including oil and gas production. Although guar is mostly propagated in India, interest in guar as a new industrial legume crop is increasing worldwide, demanding the development of effective tools for marker-assisted selection. In this paper, we report a wide-ranging set of 4907 common SNPs and 327 InDels generated from RADseq genotyping data of 166 guar plants of different geographical origin. A custom guar reference genome was assembled and used for variant calling. A consensus set of variants was built using three bioinformatic pipelines for short variant discovery. The developed molecular markers were used for genome-wide association study, resulting in the discovery of six markers linked to the variation of an important agronomic trait—percentage of pods matured to the harvest date under long light day conditions. One of the associated variants was found inside the putative transcript sequence homologous to an ABC transporter in Arabidopsis, which has been shown to play an important role in D-myo-inositol phosphates metabolism. Earlier, we suggested that genes involved in myo-inositol phosphate metabolism have significant impact on the early flowering of guar plants. Hence, we believe that the developed SNP set allows for the identification of confident molecular markers of important agrobiological traits. View Full-Text
Keywords: guar; RADseq; SNPs; population structure; GWAS; myo-inositol phosphate metabolism guar; RADseq; SNPs; population structure; GWAS; myo-inositol phosphate metabolism
►▼ Show Figures 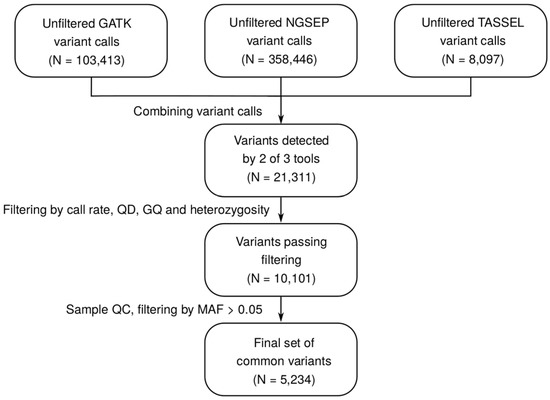