GNSS positioning accuracy can be degraded in areas where the surrounding object geometry and morphology interacts with the GNSS signals. Specifically, urban environments pose challenges to precise GNSS positioning because of signal interference or interruptions. Also, non-GNSS surveying methods, including total stations and laser scanners, involve time consuming practices in the field and costly equipment. The present study proposes the use of an Unmanned Aerial Vehicle (UAV) for autonomous rapid mapping that resolves the problem of localization for the drone itself by acquiring location information of characteristic points on the ground in a local coordinate system using simultaneous localization and mapping (SLAM) and vision algorithms. A common UAV equipped with a camera and at least a single known point, are enough to produce a local map of the scene and to estimate the relative coordinates of pre-defined ground points along with an additional arbitrary point cloud. The resulting point cloud is readily measurable for extracting and interpreting geometric information from the area of interest. Under two novel optimization procedures performing line and plane alignment of the UAV-camera-measured point geometries, a set of experiments determines that the localization of a visual point in distances reaching 15 m from the origin, delivered a level of accuracy under 50 cm. Thus, a simple UAV with an optical sensor and a visual marker, prove quite promising and cost-effective for rapid mapping and point localization in an unknown environment. View Full-Text
Keywords: UAVs; rapid surveying; GNSS-denied environments; geolocation; urban mapping UAVs; rapid surveying; GNSS-denied environments; geolocation; urban mapping
►▼ Show Figures 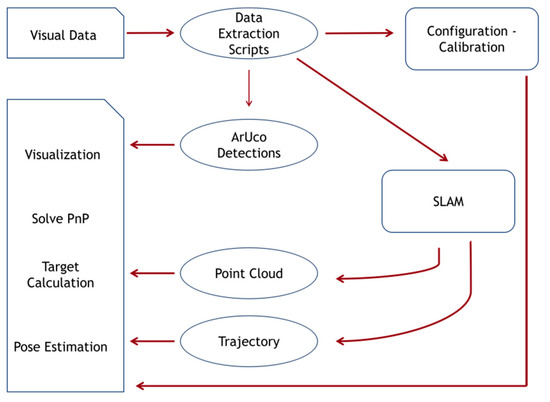