A Change of Theme: The Role of Generalization in Thematic Mapping
Previous Article in Special Issue

Although the data obtained from volunteered geographic information (VGI) are inherently different from public surveys, the quantity of the data are vast and the quality of the data are often poor. To improve the quality of VGI data, the positional accuracy and diversity and interaction of the number of users involved in the regional generation of the data are important. This research proposes a new approach for the accumulation of OpenStreetMap (OSM) data by using OSM Notes and attempts to analyze the geographical distribution and the characteristics of the contents of the contributions, quantitatively and qualitatively. Subsequently, the results demonstrated regional differences in OSM Notes, but it provided users with an understanding of the new features of quality management in OSM, even in regions where OSM activities are not necessarily active. In addition, it was also possible to discover new factors such as the time transition required for the correction and contribution of anonymous users. These results are expected to serve as a tool for users to communicate with each other to resolve data bugs that exist in OSM and provide future researchers with examples of user interaction in global OSM activities. View Full-Text
Keywords: OpenStreetMap; user interaction; anonymous contribution; geographical distribution; volunteered geographic information OpenStreetMap; user interaction; anonymous contribution; geographical distribution; volunteered geographic information
►▼ Show Figures 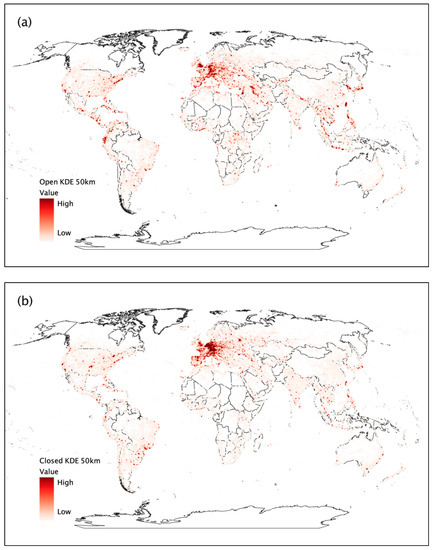