This paper presents a methodology for levee damage detection based on Unmanned Aerial System (UAS) data. In this experiment, the data were acquired from the UAS platform, which was equipped with a laser scanner and a digital RGB (Red, Green, Blue) camera. Airborne laser scanning (ALS) point clouds were used for the generation of the Digital Terrain Model (DTM), and images were used to produce the RGB orthophoto. The main aim of the paper was to present a methodology based on ALS and vegetation index from RGB orthophoto which helps in finding potential places of levee failure. Both types of multi-temporal data collected from the UAS platform are applied separately: elevation and optical data. Two DTM models from different time periods were compared: the first one was generated from the ALS point cloud and the second DTM was delivered from the UAS Laser Scanning (ULS) data. Archival and new orthophotos were converted to Green-Red Vegetation Index (GRVI) raster datasets. From the GRVI raster, change detection for unvegetation ground areas was analysed using a dynamically indicated threshold. The result of this approach is the localisation of places, for which the change in height correlates with the appearance of unvegetation ground. This simple, automatic method provides a tool for specialist monitoring of levees, the critical objects protecting against floods. View Full-Text
Keywords: UAS; LiDAR; photogrammetry; levee monitoring; levee damage; damage detection UAS; LiDAR; photogrammetry; levee monitoring; levee damage; damage detection
►▼ Show Figures 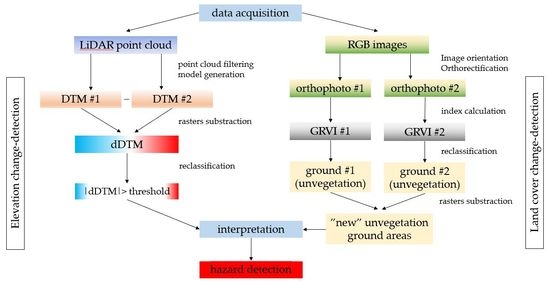