A digital model of the ground surface has many potential applications in forestry. Nowadays, Light Detection and Ranging (LiDAR) is one of the main sources for collecting morphological data. Point clouds obtained via laser scanning are used for modelling the ground surface by interpolation, a process which is affected by various errors. Using LiDAR data to collect ground surface data for forestry applications is a challenging scenario because the presence of forest vegetation will hinder the ability of laser pulses to reach the ground. The density of ground observations will be therefore reduced and not homogenous (as it is affected by the variations in canopy density). Furthermore, forest areas are generally present in mountainous areas, in which case the interpolation of the ground surface is more challenging. In this paper, we present a comparative analysis of interpolation accuracy for nine algorithms, which are used for generating Digital Terrain Models from Airborne Laser Scanning (ALS) data, in mountainous terrain covered by dense forest vegetation. For most of the algorithms we find a similar performance in terms of general accuracy, with RMSE values between 0.11 and 0.28 m (when model resolution is set to 0.5 m). Five of the algorithms (Natural Neighbour, Delauney Triangulation, Multilevel B-Spline, Thin-Plate Spline and Thin-Plate Spline by TIN) have vertical errors of less than 0.20 m for over 90 percent of validation points. Meanwhile, for most algorithms, major vertical errors (of over 1 m) are associated with less than 0.05 percent of validation points. Digital Terrain Model (DTM) resolution, ground slope and point cloud density influence the quality of the ground surface model, while for canopy density we find a less significant link with the quality of the interpolated DTMs. View Full-Text
Keywords: airborne laser scanning; digital terrain model; surface interpolation; LiDAR airborne laser scanning; digital terrain model; surface interpolation; LiDAR
►▼ Show Figures 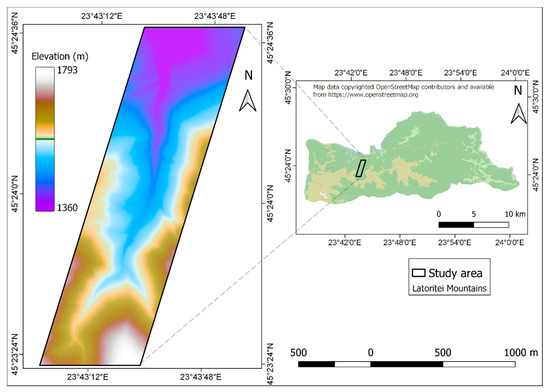