Exploring Railway Network Dynamics in China from 2008 to 2017

China’s high speed rail (HSR) network has been rapidly constructed and developed during the past 10 years. However, few studies have reported the spatiotemporal changes of railway network structures and how those structures have been affected by the operation of high speed rail systems in different periods. This paper analyzes the evolving network characteristics of China’s railway network during each of the four main stages of HSR development over a 10-year period. These four stages include Stage 1, when no HSR was in place prior to August 2008; Stage 2, when several HSR lines were put into operation between August 2008, and July 2011; Stage 3, when the network skeleton of most main HSR lines was put into place. This covered the period until January 2013. Finally, Stage 4 covers the deep intensification of several new HSR lines and the rapid development of intercity-HSR railway lines between January 2013, and July 2017. This paper presents a detailed analysis of the timetable-based statistical properties of China’s railway network, as well as the spatiotemporal patterns of the more than 2700 stations that have been affected by the opening of HSR lines and the corresponding policy changes. Generally, we find that the distribution of both degrees and strengths are characterized by scale-free patterns. In addition, the decreasing average path length and increasing network clustering coefficient indicate that the small world characteristic is more significant in the evolution of China’s railway network. Correlations between different network indices are explored, in order to further investigate the dynamics of China’s railway system. Overall, our study offers a new approach for assessing the growth and evolution of a real railway network based on train timetables. Our study can also be referenced by policymakers looking to adjust HSR operations and plan future HSR routes. View Full-Text
Keywords: high speed rail; network structure; complex network; China high speed rail; network structure; complex network; China
►▼ Show Figures 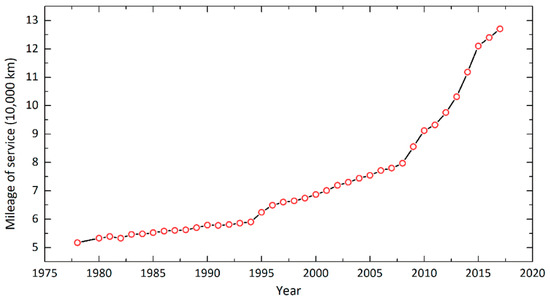