Geographic Prevalence and Mix of Regional Cuisines in Chinese Cities

Previous research on the geographies of food put a considerable focus on analyzing how different types of food or ingredients are consumed across different places. Little is known, however, about how food culture is manifested through various cooking traditions as well as people’s perceptions over different culinary styles. Using a data set captured from one of the largest online review sites in China (), this study demonstrates how geo-referenced social review data can be leveraged to better understand the geographic prevalence and mix of regional cuisines in Chinese cities. Based on information of millions of restaurants obtained in selected cities (i.e., provincial capitals and municipalities under direct supervision of the Chinese central government), we first measure by each city the diversity of restaurants that serve regional Chinese cuisines using the Shannon entropy, and analyze how cities with different characteristics are geographically distributed. A hierarchical clustering algorithm is then used to further explore the similarities of consumers’ dining options among these cities. By associating each regional Chinese cuisine to its origin, we then develop a weighted distance measure to quantify the geographic prevalence of each cuisine type. Finally, a popularity index (POPU) is introduced to quantify consumers’ preferences for different regional cuisines. We find that: (1) diversity of restaurants among the cities shows an “east–west” contrast that is in general agreement with the socioeconomic divide in China; (2) most of the cities have their own unique characteristics, which are mainly driven by a large market share of the corresponding local cuisine; (3) there exists great heterogeneity of the geographic prevalence of different Chinese cuisines. In particular, Chuan and Xiang, which are famous for their spicy taste, are widely distributed across the mainland China and (4) among the top-tier restaurants ranked by the consumers in a city, the local cuisine is not usually favored, while other cuisines are favored by consumers in many different cities. This study demonstrates the use of social review data as a cost-effective approach of studying urban gastronomy and its relationship with human activities. View Full-Text
Keywords: food geography; regional cuisine; spatial analytics; China food geography; regional cuisine; spatial analytics; China
►▼ Show Figures 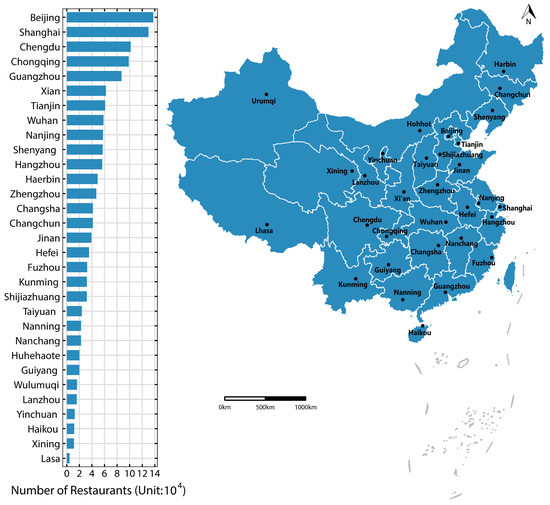