Bogor as one of the satellite cities of Jakarta Metropolitan experiences rapid population growth and urban development. The urban landscape that is changed by urban development affects the city expansion, the increase of land surface temperature (LST), and the urban heat island (UHI). Objectives of this study are to analyze the city expansion, to analyze the LST characteristic of each land use type, and to examine the correlation between LST change and land use change that is affected by the city expansion. We examined the development of the UHI through the city expansion and the increasing of LST. Landsat 5 TM in 1990, 1997, 2007, and Landsat 8 OLI/TIRS in 2017 were used in this study. For the land used classification, we used Local Climate Zone (LCZ) classification system. The result shows that Bogor has experienced city expansion in the last 27 years. According to the rate of city expansion in the different period, the highest city expansion occurred in 1997–2007 by 8213.7 ha in the analyzed area. In the analysis of relationship between LST and LCZ, there are differences of LSTs among LCZ categories. We also found the area that shows a high LST value expanded broadly towards suburban area with urban development. The temperature differences between urban and suburban were 1.36 °C in 1990, 2.33 °C in 1997, 2.97 °C in 2007, and 2.26 °C in 2017. We defined urban change degree to quantify the land use change, and it is compared with LST change. By the analysis, strong influence of urban expansion on the distribution of surface UHI was observed. View Full-Text
Keywords: city expansion; land surface temperature; local climate zone; urban heat island city expansion; land surface temperature; local climate zone; urban heat island
►▼ Show Figures 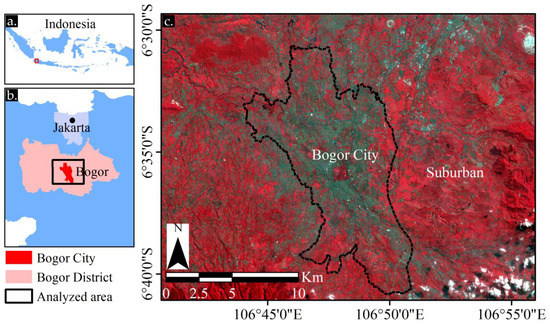