The concealment and complex spatial relationships of urban underground pipelines present challenges in managing them. Recently, augmented reality (AR) has been a hot topic around the world, because it can enhance our perception of reality by overlaying information about the environment and its objects onto the real world. Using AR, underground pipelines can be displayed accurately, intuitively, and in real time. We analyzed the characteristics of AR and their application in underground pipeline management. We mainly focused on the AR pipeline rendering procedure based on the BeiDou Navigation Satellite System (BDS) and simultaneous localization and mapping (SLAM) technology. First, in aiming to improve the spatial accuracy of pipeline rendering, we used differential corrections received from the Ground-Based Augmentation System to compute the precise coordinates of users in real time, which helped us accurately retrieve and draw pipelines near the users, and by scene recognition the accuracy can be further improved. Second, in terms of pipeline rendering, we used Visual-Inertial Odometry (VIO) to track the rendered objects and made some improvements to visual effects, which can provide steady dynamic tracking of pipelines even in relatively markerless environments and outdoors. Finally, we used the occlusion method based on real-time 3D reconstruction to realistically express the immersion effect of underground pipelines. We compared our methods to the existing methods and concluded that the method proposed in this research improves the spatial accuracy of pipeline rendering and the portability of the equipment. Moreover, the updating of our rendering procedure corresponded with the moving of the user’s location, thus we achieved a dynamic rendering of pipelines in the real environment. View Full-Text
Keywords: augmented reality; underground pipelines; occlusion method; differential correction; Visual Inertial Odometry; dynamic tracking augmented reality; underground pipelines; occlusion method; differential correction; Visual Inertial Odometry; dynamic tracking
►▼ Show Figures 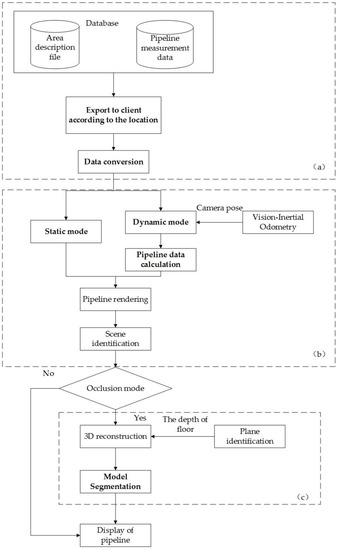