Alpine Glaciology: An Historical Collaboration between Volunteers and Scientists and the Challenge Presented by an Integrated Approach
Next Article in Special Issue

Dynamics of Sheep Production in Brazil

:
Sheep production is present on all continents and has been practiced in Brazil since the colonization. In this study, the multitemporal dynamics of sheep production in Brazil is examined using official government data (Brazilian Institute for Geography and Statistics-IBGE) from 1976 to 2010. Maps of flock growth rates and growth acceleration maps by municipality were elaborated. The Southern states are seen to show a reduction in production mainly due to the wool crisis in the 1970s and 80s. The Northeast is seen to be important for meat production. More recently, centerwest and northern states have shown an increase in growth rates but this is still incipient. The maps of growth, acceleration and midpoint for sheep production showed a noticeable return to an increase in production in the South in recent years. The midpoint of production flow was in the northeast direction, which has stagnated. There was great dynamics in sheep production over the whole Brazilian territory, which affected supply chains due to the expansion of domestic and foreign markets. Areas with higher fluctuations in production are more vulnerable in terms of investment policies.
Keywords:
production level; multitemporal analysis; risk; GIS

In Brazil, sheep farming has been practiced since the colonization, and is found throughout the country [1]. Currently, Brazil has the 8th largest flock worldwide with an estimated flock size of approximately 16.05 million head [2]. The Northeast region has 56% of the Brazilian sheep while the South has 32% and Southeast is third with 3.4% [3]. According to [4], this has been accompanied by research focused on the production and processing of animal products, organization of farmers, increasing use of technology by farmers, participation of financial institutions to facilitate access to credit and higher demand for by-products from sheep and goats.
However, production still tends to be informal, making it difficult to consolidate data on the sector [5]. This needs to be a sustainable activity due to its high socio-economic impact [6,7] especially in marginal land areas and low income rural families.
There is a large deficiency in national availability of sheep products, with insufficient production and a trade volume that does not support the industrialization of lamb which seriously affects the abattoirs working with small ruminants [8]. Despite these difficulties, sheep farming can be profitable and is important for all production scales, especially with the increasing demand for healthy foods and preference for products with higher protein lower in cholesterol, saturated fats and calories [9].
The purpose of this paper was to analyze the spatial dynamics of sheep production in Brazil from 1976–2010 using official sheep production data from the Brazilian Federal Government [10]. Specific objectives included: (1) generate maps of sheep production within each municipality in the five major regions of Brazil, (2) determine rate of growth and acceleration within each municipality, and (3) evaluate the spatial pattern and direction of changes in sheep production.

Brazil is a continental sized country with distinct environmental characteristics, especially differences in latitude and relief [11,12]. This study considered all municipalities in the five (North, Northeast, Centerwest, South and Southwest) regions of Brazil (totaling 5,561 municipalities). Brazilian sheep production was obtained from the Brazilian Institute for Geography and Statistics [10] from 1976 and 2010.
Maps were generated with the number of animals (production) for each year and then converted to raster format (GRID) and processed in ENVI software (Version 4.5, ITT Visual Information Solution, www.ittvis.com). To analyze the dynamics of production growth, maps were drawn for relative growth rate (%) of production by municipality in ArcGis 10 (ESRI, Redlands, CA: Environmental Systems Research Institute). For this, the time interval analyzed was divided in to seven equal periods with intervals of 5 years (sum of the five years of production in each period considered: 1976 to 1980, 1981 to 1985, 1986 to 1990, 1991 to 1995, 1996 to 2000, 2001 to 2005, and 2006 to 2010). Relative growth rate was calculated as: ((PPsP − PPvP)/PPvP) × 100, where PPsP is the Production in Present Period and PPvP is the Production in Previous Period. Relative growth rate resulted in six maps.
Acceleration of growth rate was obtained by relative differences in the images resulting in five maps, calculated as GRPsP − GRPvP, where GRPsP is the Growth Rate in Present Period and GRPvP is the Growth Rate in Previous Period.
The spatial mid point of production in the country was calculated for each year to assess the direction of production in the country. The latitude and longitude midpoint were obtained by multiplying the sum of the geographic coordinates of the municipality and their production divided by the number of municipalities for each year as the equations (∑ latitude × ∑ production)/Number of municipalities, for the latitude midpoint, and (∑ longitude × ∑ production)/Number of municipalities, for the longitude midpoint.
The geographic coordinate represents the localization based on the mean longitude and latitude, and production represents the mean production of all municipalities in a certain year. Data was available on a municipality basis and not individual farmer. Therefore the midpoint of production is weighted by the municipal mean sheep production for that year.
Municipalities were clustered according to their production level in 1976. Three clusters were formed using PROC FASTCLUS of SAS® v.93 (Cary, NC, USA). Summary statistics of growth rates and acceleration of production by municipality were calculated. 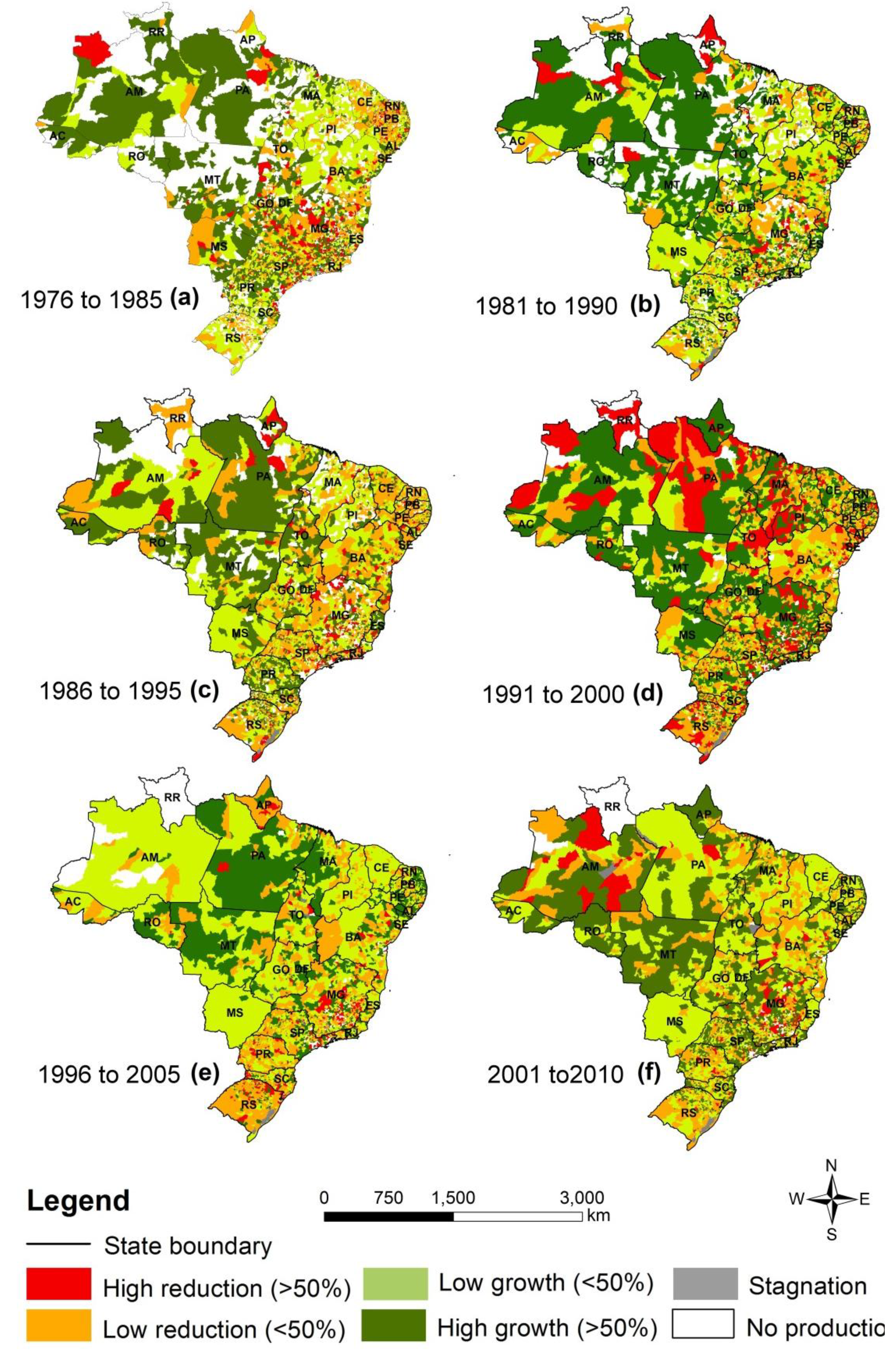 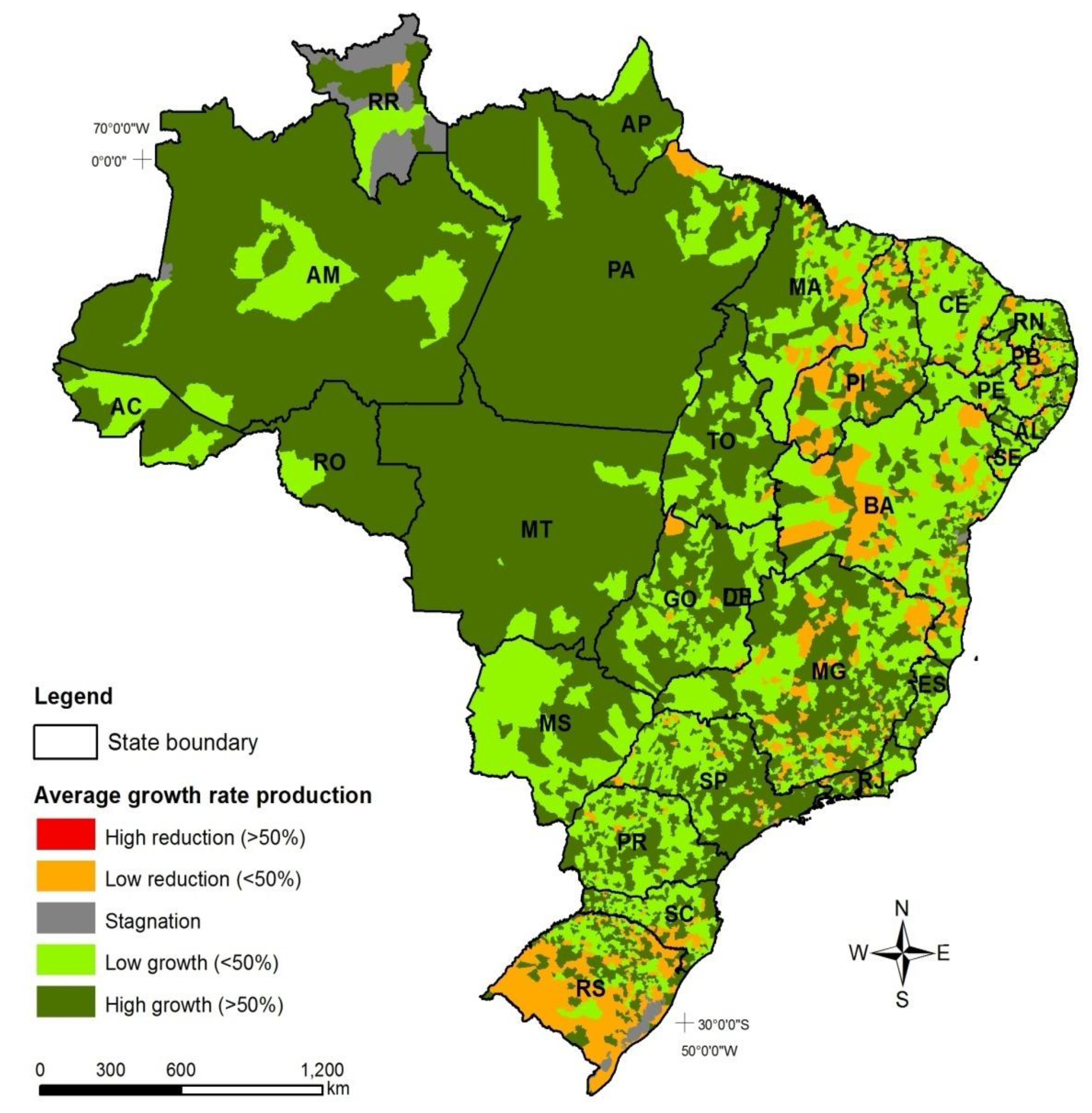 This shift in production of sheep toward the northeast of Brazil can be seen on the map of average point of production over the period analyzed (Figure 3), confirming that the dynamics of production move this activity to municipalities in the Northeast of the country. The distance is approximately 860 km (34 km per year), in a steady North-eastern direction. Especially evident is a large jump in production from 1995 to 1996. While up to 2003 the move to the Northeast is relatively fast, in more recent years it has stagnated (2006–2010). 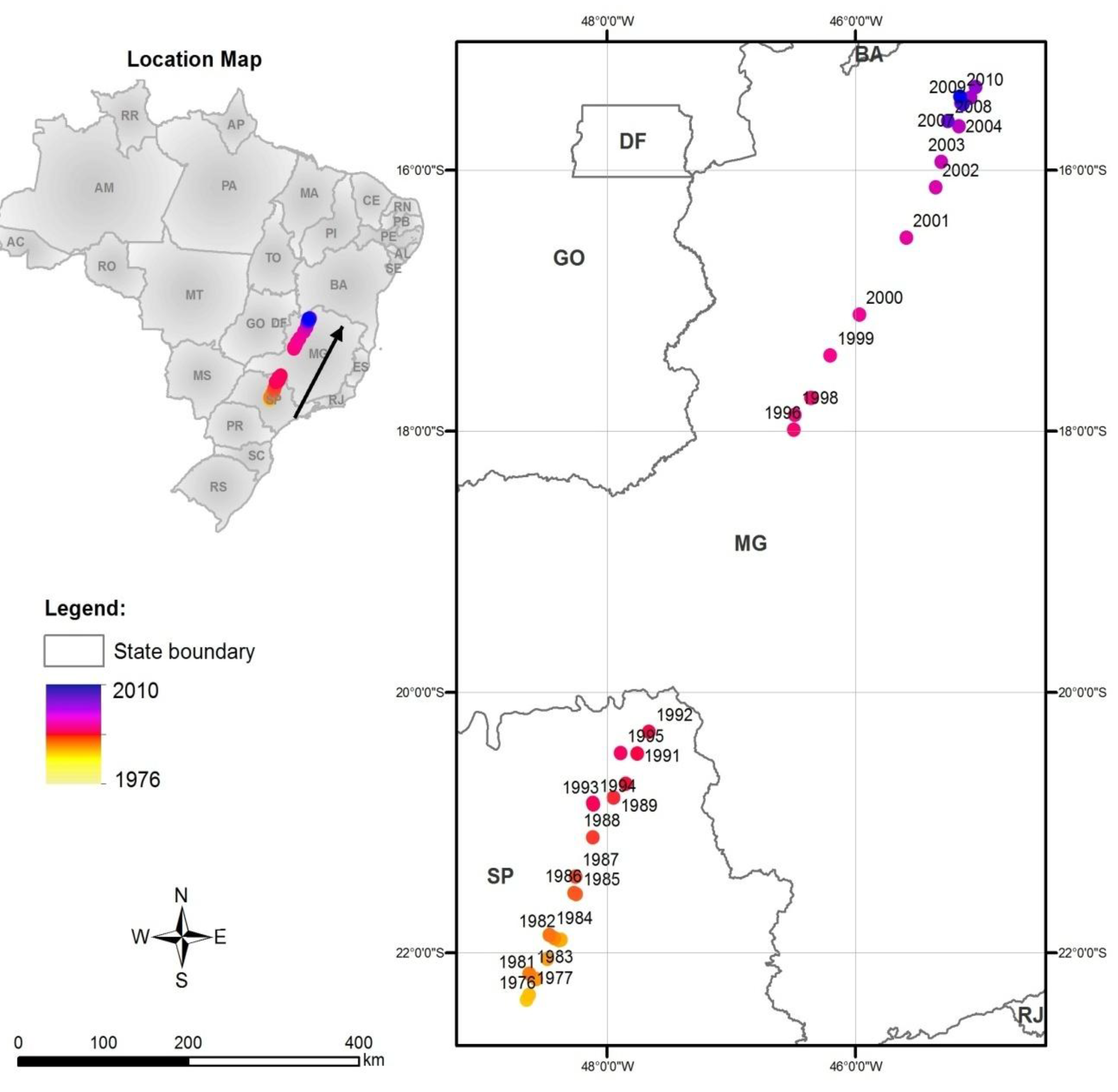 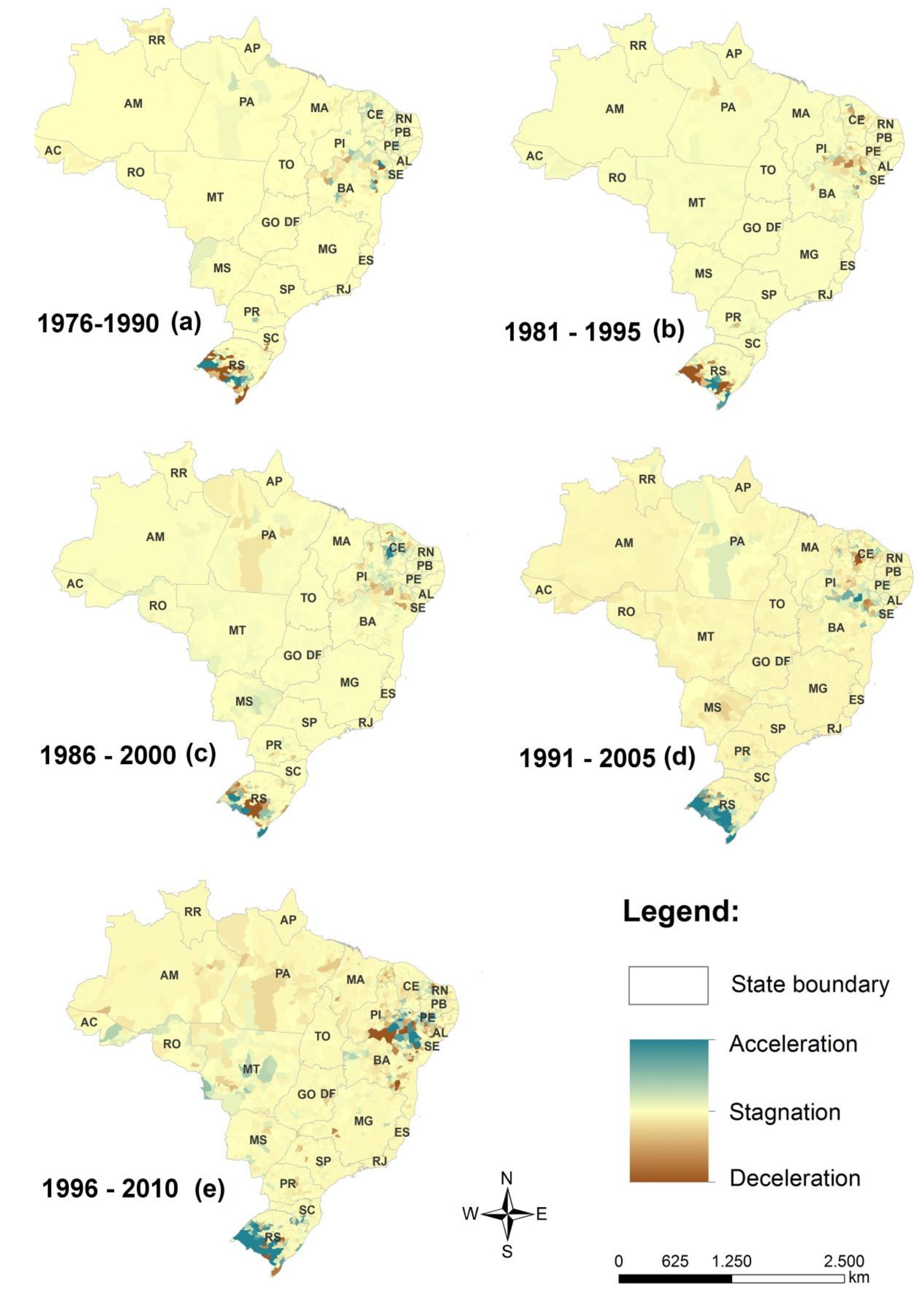 The use of maps showed a clear picture of the dynamics of sheep production in the municipalities of Brazil between 1976 and 2010. Municipalities in the South and Northeast remained at high levels throughout the period of production, reaffirming the tradition of sheep breeding in these regions. Nevertheless, the maps of growth acceleration and midpoint showed a noticeable reduction and slowing production in the South with a return to increase in more recent years. The Northeast has faced several problems with productivity but has shown stable production over the years.