The inhibition of ice growth has been the focus of significant recent research. This inhibition is important for many fields, including (a) cryotherapy [1], (b) the use of ice slurries (the mixtures of ice and water) to cool the brain during cardiac arrest, (c) the preservation of organs for transplantation in hospitals [2], (d) the improvement of storage and transportation of fresh foods by using ice slurries, and (e) the development of distributed air-conditioning systems by using ice slurries. In these cases, there exists the need to control ice growth, at least in the cases of blood plasma and ice slurries.
One of the most promising methods for controlling the growth of ice is to use a substance which has the specific purpose of controlling ice growth. Antifreeze proteins (AFPs) or antifreeze glycoproteins (AFGPs) are appropriate substances for controlling ice growth, because they lower the temperature at which a seed crystal grows but do not alter the temperature at which the crystal is stable during melting at very low cooling rates. Furthermore, an appropriate concentration of AF(G)Ps is much lower than that of other solutes [3]. This minimizes the effect of AF(G)Ps on osmotic pressure.
Among various AF(G)Ps discovered to date, HPLC6, the major fraction of winter flounder AFP, has been widely investigated. Measurements of ice crystal growth and ice crystal morphology in solutions of this protein are classified into the following two types according to the cooling rates: (i) at a very low cooling rate (≤−1 °C/min) and (ii) at a low cooling rate (>−1.5 °C/min). In type (i) measurements, an AFP solution of 0.01 mm3 in oil or liquid paraffin in osmometers are typically frozen at −40 °C, and gradually heated until only a single crystal of approximately 7 μm in diameter is obtained [3,4]. The solution with the tiny crystal is maintained at this temperature for 1 min to allow the crystal to stabilize, and this temperature is defined as the ‘melting point’ (mp), although in some cases the mp is taken to be the temperature at which the crystal finally disappears. The solution with the crystal is then gradually cooled at −1.0 °C/min. Chao et al. [5] considered the ‘freezing point’ to be the temperature at which the ice growth velocity exceeded 0.2 μm/s. It can be considered from this low ice-growth velocity that thermodynamically quasi-equilibrium conditions are held. In the case of type (ii) measurements, there are several other experimental methods that can help to elucidate the activities of AF(G)P: Wilson et al. [6] developed an automated lag-time apparatus where a 200 mm3 sample solution of winter flounder AFP was held in a glass tube, and they measured the nucleation rate in the tube. Coger et al. [7], Furukawa et al. [8], Butler [9] Hagiwara and Yamamoto [10], Hagiwara and Aomatsu [11] and Miyamoto et al. [12] carried out experiments on the unidirectional freezing of AF(G)P solutions in narrow spaces between two glass plates. They measured the velocities and morphologies of the ice/solution interfaces, the concentration of solutes, temperature distribution and the dimension of AFP aggregates. The ice growth velocity was in the range of 0–89 μm/s. Serrated interfaces were produced by not only the adsorption of AF(G)P but also the approach of AFP aggregates or high concentration region of solute to the interfaces. The concentration distributions of AFP and ions in the mixed solution were changed by the other solute, which is a possible reason for the synergistic effect of solutes.
Although these findings are valid, it has not yet been confirmed whether they hold in the situation where the AFP solution flows along with ice crystals. Furthermore, experimental results for such flows are limited. Grandum et al. [13] showed that the pressure drop for the ice slurry flow was higher than that for water flow in a pipe of 6 mm in inner diameter. They also observed the growth of seed crystals in the direction of c-axis in the quiescent solution and the crystals being transported in the core region of flow. Onishi et al. [14] found that HPLC6 inhibited the aggregation of ice particles in ice slurry flow in a mini-channel.
With this in mind, in the present study, we measure the growth of ice particles in the flow of HPLC6 solution in mini-channels. We discuss the effects of preheating or ultrafiltration of the solution on the ice-particle growth.

The sequence of amino-acid residues for HPLC6 is as follows: DTASDAAAAAALTAANAKAAAELTAANAAAAAAATAR (A: Alanine, D: Aspartic acid, E: Glutamic acid, K: Lysine, L: Leucine, N: Asparagine, R: Arginine, S: Serine, T: Threonine). It consists of 37 amino acid residues and has a molecular weight of 3242 Da. The secondary structure of HPLC6 is an α-helix. Four threonine residues are positioned at nearly identical distances on one line parallel to the helical axis. The distance between the oxygen atoms on the pyramidal faces of ice crystals, which were observed in the supercooled solution of HPLC6, is nearly identical to the distance between the threonine residues. It had thus been hypothesized that the hydrogen atoms of the threonine residues were bonded permanently to the oxygen atoms on the pyramidal faces in the ice crystal and that the water molecules were prevented from bonding to the ice surface by the Kelvin (or Gibbs–Thomson) effect [5]. On the other hand, discussion was conducted on the alanine-rich surfaces of HPLC6 in the ice-growth inhibition mechanism [15,16,17].
We purchased the synthetic polypeptide from GenScript Inc. (Taito, Tokyo, Japan).

The HPLC6 solution was preheated at a constant temperature for a predetermined time and cooled in the temperature-controlled room before the measurements were carried out. A polypropylene bottle containing the sample liquid was installed in a drying chamber (As One Co., Ltd., Osaka, Japan, ETTAS ONW-450S). The temperature was set to 80 °C and the duration was one hour. The HPLC6 concentration was 0.5 mg/mL. The preheating condition was determined based on our previous study on the inhibition of unidirectional freezing of HPLC6 solution [12].

The preheated HPLC6 solution was filtered to increase the solution concentration. We used a centrifuge (Koki Holdings Co., Ltd., Tokyo, Japan, Himac CF15D2) and ultrafiltration membranes. The molecular weight cut-offs of membranes were 104 and 105. The centrifugal force was 14,000× g.

Figure 1 shows the apparatus for producing ice slurry. Saline solution of 100 mL was contained in a beaker made of polymethylpentene. The beaker was installed in the constant-temperature liquid bath (Yamato Scientific Co., Ltd., Tokyo, Japan, BB301). The bath was filled with ethylene glycol as a coolant. The free surface of the coolant was set higher than that of the saline solution so that the solution was cooled from surroundings.
First, the temperature of the solution was maintained at −3 °C. Secondly, seed crystals of ice were added to the supercooled solution. The solution with ice particles was stirred with an agitator (As One Co., Ltd., Osaka, Japan, K-2RFN) for one hour. The temperature of the mixture was maintained at −1.2 °C.

3.1. In the Case of Quiescent Ice Slurry

Figure 3 shows typical ice particles. In the case of quiescent ice slurry without HPLC6, the ice particles had shapes of elliptical plates, when the image capturing started. Some elliptical plates grew uniformly, whereas the other plates grew non-uniformly (see Figure 3a). The latter plates formed dendrite crystals eventually. The ice grew along the a-axis because the growth rate along the a-axis is more than 100 times higher than the growth rate along the c-axis [18]. The ice plates were located near the inner surface of the upper wall of the mini-channel due to buoyancy.
In the case of quiescent ice slurry with HPLC6 whose concentration was 0.125 mg/mL, the ice particles became plates with the shape of a hexagon when the image-capturing started (see Figure 3b). These plates grew in the normal direction to the edge surfaces of the hexagonal shape, i.e., in the a-axis direction.
In the case where the HPLC6 concentration was 0.25 mg/mL, as shown in Figure 3c, the edge surfaces of large hexagonal plates are found to be wider than the edge surfaces in Figure 3b. This clearly shows that the edge surfaces had already leaned to the z-axis (i.e., the c-axes of the ice particles) before the image-capturing started. A small ice particle whose c-axis is parallel to the images is also seen in this figure. After 200 s, the hexagonal shapes became larger, and the edge surfaces of large hexagonal plates became much wider than before. That is, ice particles grew in the a-axis and c-axis directions, and the edge surfaces inclined further. Consequently, the large plates seemed to become truncated hexagonal pyramids. The small ice particle became a truncated hexagonal bi-pyramid. Note that these truncated pyramids became pyramids eventually.
In the case where the HPLC6 concentration was highest, the ice particles had already had shapes of hexagonal bi-pyramid before the image-capturing started (see Figure 3d). The hexagonal bi-pyramidal shape is similar to the ice crystal shape commonly observed in nanoliter osmometers, the shape being the result of adsorption of HPLC6 on the ice surfaces. The axes of the bi-pyramidal ice crystals are not parallel but perpendicular to the z-axis. This is probably a result of slow flow of ice slurry in the mini-channel to introduce ice particles into the central part of the channel. Thus, it is surmised that the adsorption of HPLC6 on the pyramidal faces of ice particles had already initiated just after the ice slurry and HPLC6 solution were mixed.

3.3. Effects of Preheating of HPLC6 Solution

We have carried out observations of ice particle growth in both quiescent and flowing aqueous solutions of winter flounder antifreeze proteins in a mini-channel and measured ice growth rates. The main conclusions are as follows: 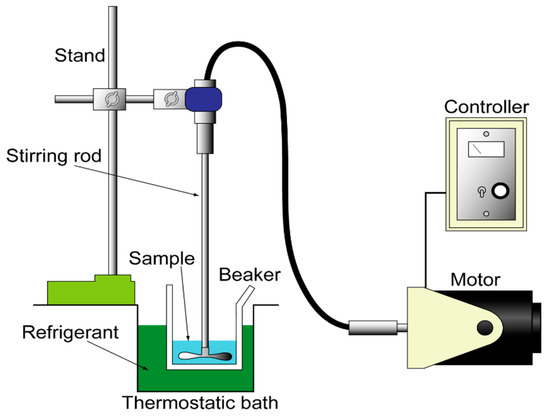 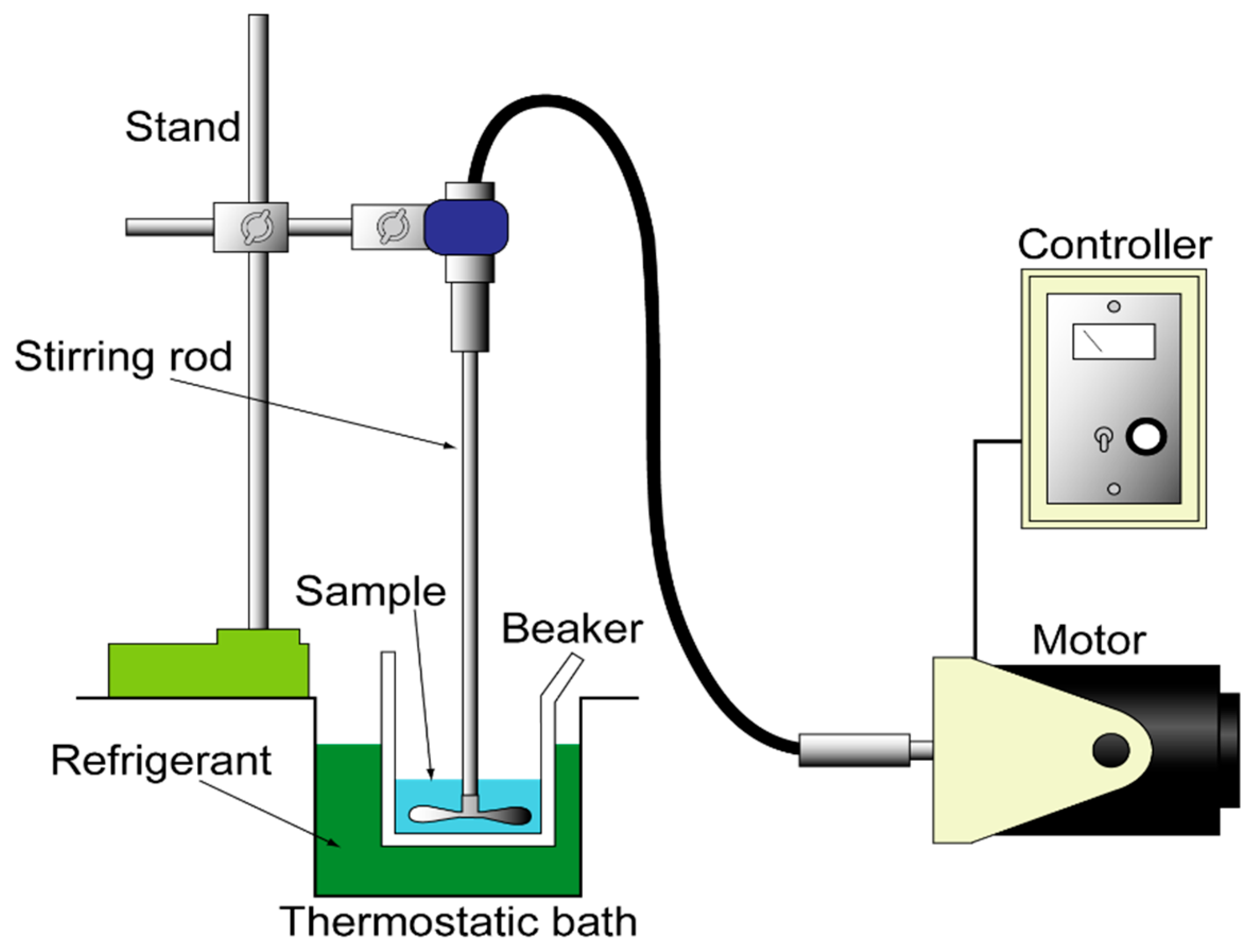 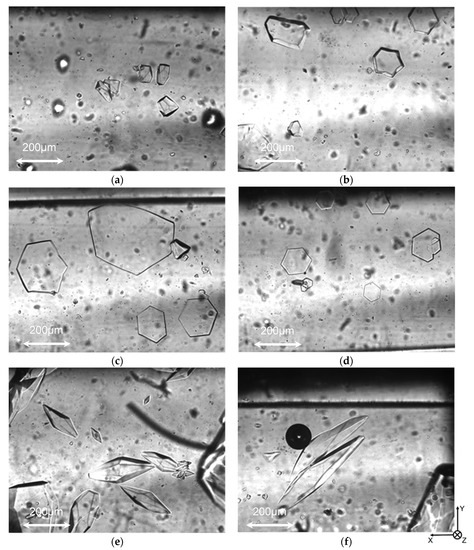