Phosphatases in Mitosis: Roles and Regulation
Previous Article in Journal

NP-Scout: Machine Learning Approach for the Quantification and Visualization of the Natural Product-Likeness of Small Molecules
Previous Article in Special Issue

Aurora A Protein Kinase: To the Centrosome and Beyond

It has recently emerged that human chromosomes vary between one another in terms of features that impact their behaviour during impaired chromosome segregation, leading to non-random aneuploidy in the daughter cell population. During the process of chromosome congression to the metaphase plate, chromosome movement is guided by kinesin-like proteins, among which centromere-associated protein E (CENP-E) is important to transport chromosomes along the microtubules of the mitotic spindle. It is known that the inhibition of CENP-E notably impairs alignment for a subset of chromosomes, particularly those positioned close to the centrosome at nuclear envelope breakdown (‘polar chromosomes’); it is, however, not clear whether chromosome identity could influence this process. Since a popular strategy to model aneuploidy is to induce congression defects (for example combining CENP-E inhibitors with mitotic checkpoint abrogation), variance in congression efficiency between chromosomes might influence the landscape of aneuploidy and subsequent cell fates. By combining immunofluorescence, live cell imaging and fluorescence in situ hybridisation, we investigated the behaviour of polar chromosomes and their dependency upon CENP-E-mediated congression in human cells. We observed a bias in congression efficiency related to chromosome size, with larger chromosomes more sensitive to CENP-E inhibition. This bias is likely due to two contributing factors; an initial propensity of larger chromosomes to be peripheral and thus rely more upon CENP-E function to migrate to the metaphase plate, and additionally a bias between specific chromosomes’ ability to congress from a polar state. These findings may help to explain the persistence of a subset of chromosomes at the centrosome following CENP-E disruption, and also have implications for the spectrum of aneuploidy generated following treatments to manipulate CENP-E function. View Full-Text
Keywords: CENP-E; chromosome congression; aneuploidy; chromosome identity CENP-E; chromosome congression; aneuploidy; chromosome identity
►▼ Show Figures 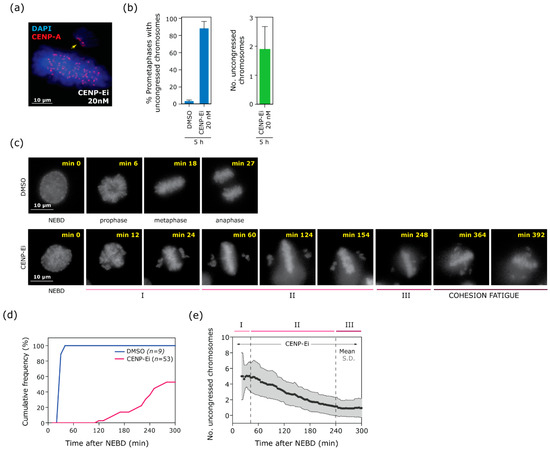