Plant microRNAs (miRNAs) have recently been reported to be involved in the cross-kingdom regulation of specific cellular and physiological processes in animals. However, little of this phenomenon is known for the communication between host plant and insect herbivore. In this study, the plant-derived miRNAs in the hemolymph of a cruciferous specialist Plutella xylostella were identified by small RNAs sequencing. A total of 39 miRNAs with typical characteristics of plant miRNAs were detected, of which 24 had read counts ≥ 2 in each library. Three plant-derived miRNAs with the highest read counts were validated, and all of them were predicted to target the hemocyanin domains-containing genes of P. xylostella. The luciferase assays in the Drosophila S2 cell demonstrated that miR159a and novel-7703-5p could target BJHSP1 and PPO2 respectively, possibly in an incomplete complementary pairing mode. We further found that treatment with agomir-7703-5p significantly influenced the pupal development and egg-hatching rate when reared on the artificial diet. The developments of both pupae and adults were severely affected upon their transfer to Arabidopsis thaliana, but this might be independent of the cross-kingdom regulation of the three plant-derived miRNAs on their target genes in P. xylostella, based on expression analysis. Taken together, our work reveals that the plant-derived miRNAs could break the barrier of the insect mid-gut to enter the circulatory system, and potentially regulate the development of P. xylostella. Our findings provide new insights into the co-evolution of insect herbivore and host plant, and novel direction for pest control using plant-derived miRNAs. View Full-Text
Keywords: diamondback moth; plant-derived microRNA; cross-kingdom; BJHSP1; PPO2; development diamondback moth; plant-derived microRNA; cross-kingdom; BJHSP1; PPO2; development
►▼ Show Figures 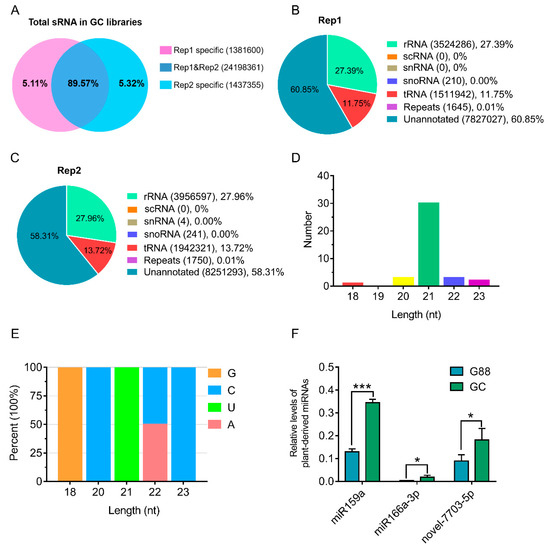