Flumequine is a well-known second generation quinolone antibiotic that induces phototoxicity. However, the effect of flumequine on skin melanogenesis is unclear. Therefore, we, for the first time, investigated whether flumequine regulates melanogenesis. The present study showed that flumequine slightly inhibited in vitro mushroom tyrosinase activity but significantly increased extracellular and intracellular melanin content in B16F10 cells and promoted the expression of microphthalmia-associated transcription factor (MITF) and tyrosinase. Additionally, flumequine remarkably increased melanin pigmentation in zebrafish larvae without any toxicity. We also found that flumequine stimulated p38 mitogen-activated protein kinase (MAPK) and c-Jun N-terminal kinase (JNK) phosphorylation; inhibition of p38 MAPK and JNK resulted in significant downregulation of extracellular and intracellular melanin content in B16F10 cells and pigmentation of zebrafish larvae accompanied with suppression of MITF and tyrosinase expression, indicating that flumequine-mediated p38 and JNK promote melanogenesis in vitro and in vivo. According to the molecular docking prediction, flumequine targeted dual-specificity MAPK phosphatase 16 (DUSP16), which is a major negative regulator of p38 MAPK and JNK. Our findings demonstrate that flumequine induces an increase in melanin content in B16F10 cells and zebrafish larvae by activating p38 MAPK and JNK. These data show the potential of flumequine for use as an anti-vitiligo agent. View Full-Text
Keywords: flumequine; melanogenesis; mitogen-activated protein kinase flumequine; melanogenesis; mitogen-activated protein kinase
►▼ Show Figures 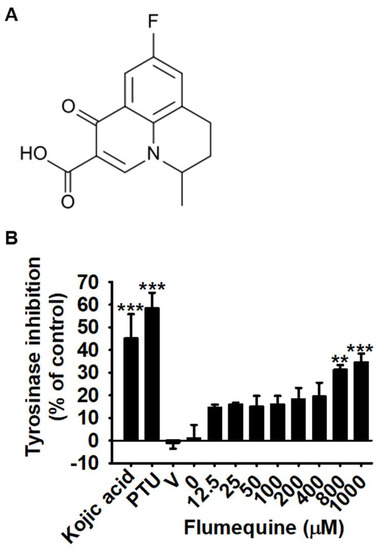