Potassium bicarbonate (PB), calcium chelate (CCh), and sodium silicate (SSi) have been extensively used as antifungal generally recognized as safe (GRAS) compounds against plant pathogenic fungi. In this research, in in vitro tests, the radial growth, conidial germination, and germ tube elongation of Botrytis cinerea was completely inhibited at 0.3% of PB, SSi, and CCh. In in vivo tests, application of PB, SSi, and CCh completely inhibited the occurrence of gray mold incidence of inoculated ‘Italia’ grape berries at concentrations of 1.0, 0.8, and 0.8%, respectively. In order to investigate the detailed mechanisms by which salts exhibited antifungal activity, we analyzed their influence on morphological changes by scanning electron microscopy (SEM) and transmission electron microscopy (TEM) and also on reactive species of oxygen (ROS), mitochondrial membrane potential (MMP), and adenosine triphosphate (ATP) content. Defects such as malformation and excessive septation were detected on salt-treated hyphae morphology observed by SEM. The internal structure of conidia treated or not with salt solutions was examined by TEM. In treated conidia, most of the conidia were affected and cellular vacuolization and cytoplasmic disorganization was observed. For ROS accumulation, a higher increase was observed in fluorescent conidia in presence of PB, SSi, and CCh by 75, 68, and 70% as compared to control, respectively. MMP was significantly decreased after salt application indicating a loss of mitochondria function. Also, luminescence showed that B. cinerea-conidia treated with salts contained less ATP than the untreated conidia. The results obtained herein are a step towards a comprehensive understanding of the mode of action by which salts act as antifungal agents against B. cinerea. View Full-Text
Keywords: Botrytis cinerea; salts; ATP; ROS; mitochondrial membrane potential Botrytis cinerea; salts; ATP; ROS; mitochondrial membrane potential
►▼ Show Figures 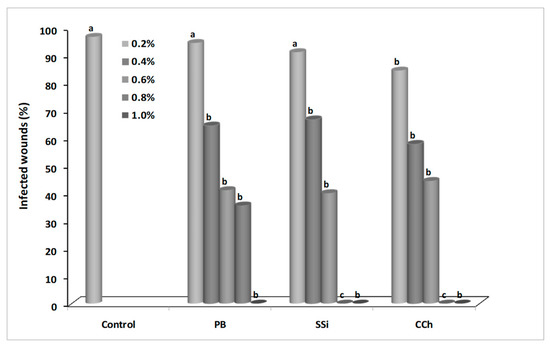