Review
Epibatidine: A Promising Natural Alkaloid in Health
by

:
Epibatidine is a natural alkaloid that acts at nicotinic acetylcholine receptors (nAChRs). The present review aims to carefully discuss the affinity of epibatidine and its synthetic derivatives, analogues to nAChRs for α4β2 subtype, pharmacokinetic parameters, and its role in health. Published literature shows a low affinity and lack of binding of epibatidine and its synthetic analogues to plasma proteins, indicating their availability for metabolism. Because of its high toxicity, the therapeutic use of epibatidine is hampered. However, new synthetic analogs endowed from this molecule have been developed, with a better therapeutic window and improved selectivity. All these aspects are also discussed here. On the other hand, many reports are devoted to structure–activity relationships to obtain optically active epibatidine and its analogues, and to access its pharmacological effects. Although pharmacological results are obtained from experimental studies and only a few clinical trials, new perspectives are open for the discovery of new drug therapies.
Keywords:
epibatidine; nicotinic acetylcholine receptors; analgesics; ABT-594; ABT-418

Epibatidine (exo-2-(6-chloro-3-pyridyl)-7-azabicyclo-[2.2.1]heptane) is a toxic alkaloid isolated and identified from Epipedobates tricolor skin, an Ecuadorian poison frog used by indigenous tribes in darts for hunting [1]. Although it was discovered in 1974 by Daly and Myers, epibatidine formula C11H13N2Cl and its chemical structure was only established in 1992 using nuclear magnetic resonance spectroscopy [2].
This alkaloid is widely considered an analgesic agent, with a potency ranging from 100- to 200-fold higher than the analgesic opioid morphine and 30 times higher than nicotine. The analgesic mode of action of epibatidine is attributed to its interaction with nicotinic acetylcholine receptors (nAChRs), and not with the opioid receptors. Nicotinic acetylcholine receptors are transmembrane oligomeric ligand-gated ion channels and are expressed both central and peripherally. The muscle nAChRs is a pentamer and it consist of a combination of four classes subunits (subunit α expressed in two copies and the other three subunits β, γ, δ as single copies) that form a transmembrane aqueous pore. The neuronal nAChRs are pentameric structures with a combination of only two classes of subunits (α and β). The most abundant heteromeric nAChRs subtypes in the brain are composed of two αand three β subunits (i.e., (α4)2(β2)3) [3]. Particularly, in mammalian central nervous system (CNS) the heterodimeric nAChR subtypes α4β2, and the monomeric subtypes α7 are the most expressed. Epibatidine has high affinity to nAChRs for the α4β2 subtype, being a potent, but non-selective (α4β2 Ki = 40 pM; α7 Ki = 20 nM) nAChR agonist. The inhibitory constant (Ki) of a drug is known to cause the inhibition of a cytochrome P450 enzyme and have to do with the concentration needed to reduce the activity of that enzyme by half. The Ki is reflective of the binding affinity for a drug [4].
Unfortunately, its broad-spectrum of activity induces several off-targets effects in several districts, such as in CNS as well as in respiratory, gastrointestinal, and cardiovascular functions, precluding any therapeutic development [5]. Thus, epibatidine toxicity could be related to its ability to activate not only the central neuronal α2β2, but also the ganglionic α3β4 nAchR.
The great interest in epibatidine arises with the discovery of the analgesic activity mediated by non-opioid receptors. This mode of action is a good alternative to induce analgesia with no risk of dependence, tolerance and psychological dependence. The lack of opioid-receptors mediated activity has been proved by the co-administration of naloxone, an opioid antagonist. The experiment performed by Qian et al. [6] proved that the epibatidine-induced anti-nociception in mice and rats, is not influenced by naloxone, but the effective therapeutic dose is close to the lethal dose and, thus, the therapeutic safety interval is narrow. The main clinical signs of epibatidine toxicity includes activation of exocrine secretions (rhinorrhea, sialorrhea, lacrimation), seizures, hypertension, and muscle paralysis. These effects occur because epibatidine binds to nAChRs in the CNS, as well as to nAChRs in skeletal neuro-muscular junctions [7]. For instance, Thompson et al. [8] demonstrated that epibatidine binds to α-7 nicotinic receptors (α7nACh) present both peripherally and centrally in the nervous system. These central receptors are involved in various neurological conditions, such as schizophrenia, Parkinson’s, and Alzheimer’s disease (AD), but also in other important physiological functions, including neuroprotection, memory and learning, and pain control [9]. For this reason, new ligands of these receptors have been investigated as upcoming pharmacological research tools or as possible drugs.
In light of these aspects, it has been found that the new neuronal nAChRs agonists synthesized have a greater affinity to the α4β2 receptor subtype of the CNS and low affinity to neuromuscular junction nAChRs. Thus, Abbott Laboratories synthesized a neuronal nACh receptor agonist named ABT-594 (tebanicline or ebanicline) derived from the epibatidine structure, which binds preferentially to α4β2 receptor subtype [10]. More recently, other studies demonstrated other pharmacological effects of epibatidine. For instance, Shimizu et al. [11] reported increases in adrenaline and noradrenaline concentrations after intracerebroventricular injection of medium doses of epibatidine in rats. Moreover, it has been shown that nicotinic receptors α4β2 activation in brain produce elevated secretion of catecholamines from adrenal glands [11]. Unexpected outcomes were obtained by Green et al. [12] in recent research. They demonstrated, in an in vivo study using a pregnant goats model, that epibatidine dosed at 0.002 mg/kg did not completely inhibit fetal movements, but produced intoxication with clinical signs (salivation, muscle fasciculation, urination). These results are important because the complete inhibition of fetal movements is associated with an increased risk of teratogenicity [12].

2. Pharmacokinetics of Epibatidine and Its Synthetic Derivatives

Epibatidine biological targets and mechanisms of action are now well established [13], but little is known on its pharmacokinetics. Although some parameters, like intestinal absorption, distribution through the blood–brain barrier (BBB) and metabolism by the cytochrome CYP450 enzyme family, can be predicted by means of informatic tools (http://lmmd.ecust.edu.cn/admetsar1) (data about epibatidine can be found on DrugBank (DB07720 at www.drugback.ca)), experimental in vitro and in vivo data still remain scarce. London et al. [14] reported that epibatidine reaches the highest distribution in thalamus and upper colliculus in the brain 30 min after tail-vein administration in rats. A slow clearance was also observed, with epibatidine still present in brain 4 h post administration [14]. More recently, Javors et al. [15] investigated epibatidine absorption and distribution using a mouse model. A dose of 0.1 mg/kg epibatidine was administered intraperitoneally to C57BL/10J mice and the alkaloid concentration was monitored in plasma samples collected 10 min post-injection [15]. Significantly different amounts of epibatidine were observed between male and female mice, with concentrations of 7.3 ng/mL for males and 37.1 ng/mL for females [15]. However, this discrepancy was not discussed further. Similar results were then obtained by Shiraishi and coauthors [16] using a rat model, where a plasma concentration of 5.8 ng/mL was detected following intraperitoneal injection of 10 µg/kg epibatidine [16].
Data on epibatidine metabolism are scarce. Preliminary observations were published in 2000 by Watt et al. [17]. This research investigated in vitro the route of metabolism of epibatidine (+) and (−) enantiomers. The results showed the formation of the diastereoisomeric N-oxides for (+) for (+) epibatidine and hydroxylation of the azabicycle for (−) epibatidine [17].
Studies on epibatidine metabolism and metabolites excretion have undergone gradual decreased in number due to its severe side effects. More recently, efforts have been made to address the pharmacokinetics of new derivatives of epibatidine with reduced toxicity, as reported by Heugebaert et al. [18]. The authors presented five epibatidine analogs containing a substituent on the azabicyclo[2.2.1]heptane bridgehead, namely a ketone linker, an OH linker, an aminomethyl linker, and two ethyl linkers containing an OH and a NH2 group, respectively. Only ketone-binding epibatidine maintained chlorine in the aromatic ring. However, the authors focused their attention only on an aminomethyl- and two ethyl linkers containing an OH and a NH2 group, due to their higher affinity for α4β2 nAChR [18], and for them studied the in vitro pharmacokinetics. Both compounds showed a low binding affinity to plasma proteins, meaning that they are available for metabolism [18]. Using isolated rat hepatocytes, an evaluation of metabolic stability was carried out and the results indicated compounds with an OH linker as metabolically stable, while the metabolism of an aminomethyl linker seemed to be concentration-dependent and faster than that of control (verapamil), thus hampering its t1/2 (<2 min, compared to t1/2 = 175 min for OH binding compound; the half-time (t1/2) is a pharmacokinetic parameter, being defined as the required time to decrease half of the concentration of an active substance in plasma) [18].
Other epibatidine derivatives have been synthetized over the past few years and evaluated for a possible use as radioligands for neuroimaging by positron emission tomography (PET) of α4β2 nAChR. Among others, radiolabeled derivatives of flubatine (Figure 1), (+)- and (−)-[18F] enantiomers of flubatine seem to represent the most suitable candidates and have been examined in several studies to investigate their metabolic fate both in vitro and in vivo. In a study by Patt et al. [19], plasma protein binding, metabolism, and activity distribution between plasma and whole blood of (−)- enantiomer of [18F]flubatine were investigated in 21 AD patients and 20 healthy controls. The obtained results showed that the amount of (−)- enantiomer of [18F]flubatine that bonded to plasma proteins was 15%, and was found to be poorly metabolized, with almost 90% of the administered dose remaining unchanged after 90 min post-injection. In addition, radioactivity distribution between plasma and whole blood only slightly changed over time, from 0.82 at 3 min post-injection to 0.87 at 270 min post-injection, indicating the contribution of only a small amount of metabolites [19]. In a more recent study by Ludwig and coauthors [20], the metabolic fate of (+)- enantiomer of [18F]flubatine was investigated in a clinical study involving patients with early AD. The same experiment was carried out for non-radiolabeled (+)- enantiomer of flubatine in pigs. For the latter, the six major metabolites detected in urine were formed by monohydroxylation at different sites of the azabicyclic ring system. An intermediate metabolite underwent glucuronidation, both in vitro and in vivo, and was detected in both plasma and urine [20]. In humans, it was observed that 30 min post-injection, 95.9% of the administered (+)- enantiomer of [18F]flubatine dose was present in plasma as unmodified, while 95.1% were present in urine, as further proof of the metabolism stability of these derivatives. As observed in pigs for (+)- enantiomer of flubatine, the main metabolites detected in plasma and urine were formed by monohydroxylation at the azabicyclic ring system (0.0−3.8% in plasma and 0.0−4.9% in urine, 30 min post-injection) and glucuronidation (0.0–4.0% in plasma and 0.4–10.7% in urine, 30 min post-injection) [20].

3. Role of Epibatidine in Health

Epibatidine and its analogues have revealed a promising therapeutic potential in further diseases as well as pain. Data published show a low affinity and scarce binding of either epibatidine and its synthetic analogues to plasma proteins, indicating their availability for metabolism. However, quantitative data show that the amounts of both plasma and urinary metabolites are negligible compared to the amounts of underivatized compounds, indicating that, in general, they are not prone to metabolism. Due to severe gastrointestinal side effects, the first analogue of epibatidine, ABT-594, is not included in current pain therapies in humans. However, another new synthetic derivative of epibatidine ABT-418 is used in treatment of less severe ADHD in adult patients. ABT-418 has been well-tolerated by patients with minor side effects, such us nausea, dizziness, headaches, or skin irritations. Thus, epibatidine pharmacological effects open new perspectives in drug therapies and also represent an important research tool to investigate nAChR activity.

All authors contributed equally to this work. B.S., M.S.-R., S.P., N.M., and J.S.-R. critically reviewed the manuscript. All authors read and approved the final manuscript.

The APC was funded by N.M.

Martins N. would like to thank the Portuguese Foundation for Science and Technology (FCT–Portugal) for the Strategic project reference UID/BIM/04293/2013 and “NORTE2020—Programa Operacional Regional do Norte” (NORTE-01-0145-FEDER-000012). 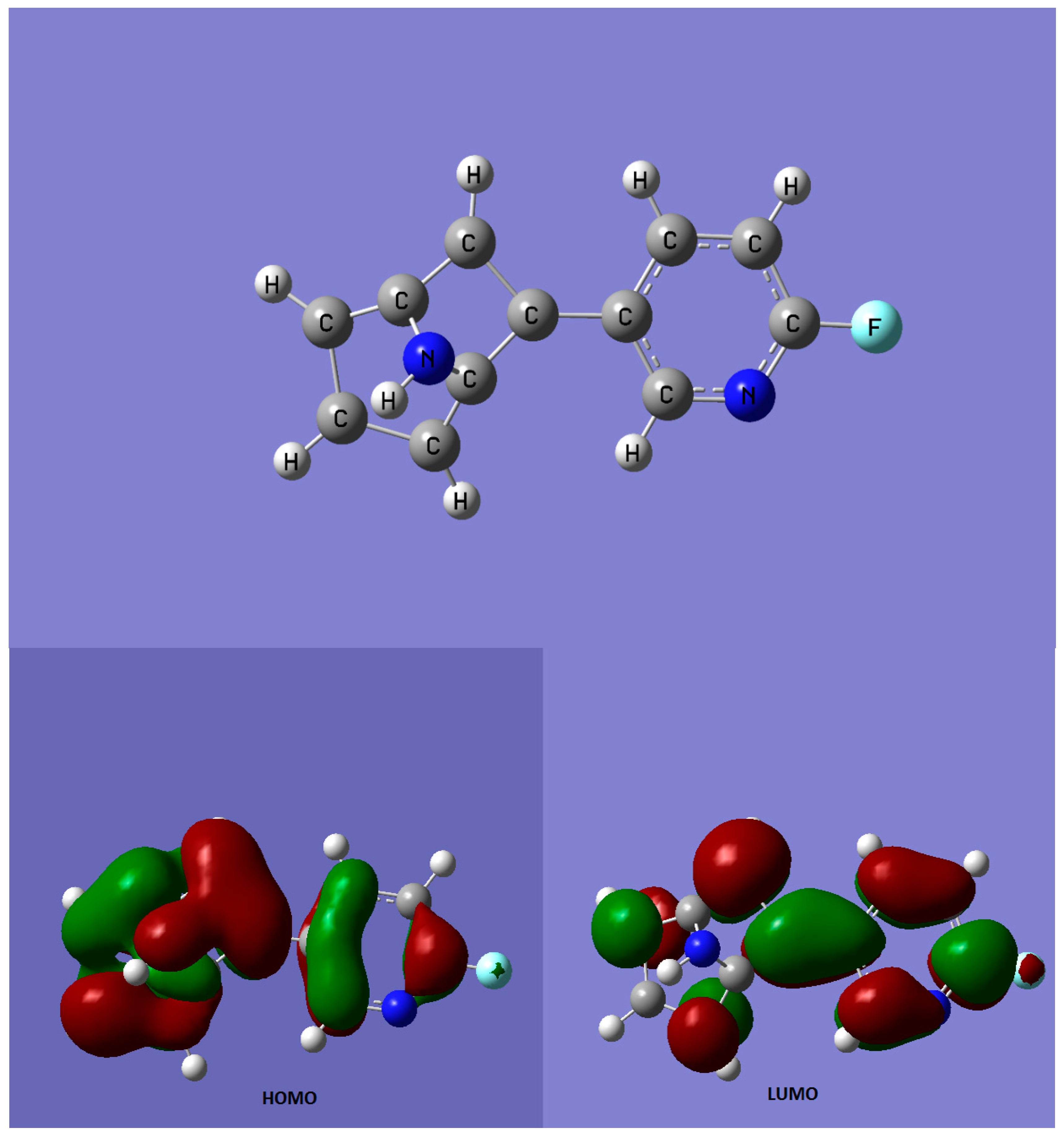