Objective: We aimed to compare the levels of plasma zonulin, a non-invasive biomarker of increased intestinal permeability, between pregnant subjects, with and without gestational diabetes mellitus (GDM), at 24–28 gestational weeks. The eighty-five consecutive pregnant subjects that presented to our hospital’s obstetrics outpatient clinic and were diagnosed with GDM, for the first time by an oral glucose tolerance test (OGTT), formed the GDM group; 90 consecutive subjects that were not diagnosed with GDM by OGTT, formed the control group. The diagnosis of GDM was made by an OGTT performed between the 24th and 28th weeks of gestation, and in compliance with the American Diabetes Association (ADA) criteria. Plasma zonulin levels were measured by the enzyme-linked immunosorbent assay (ELISA) methods. The Plasma zonulin level was significantly higher in the GDM group than the control group (p < 0.001). A correlation analysis showed that plasma zonulin level was positively correlated to body mass index (BMI), creatinine, fasting plasma glucose, baseline, first hour, and two hours glucose levels and the OGTT, hemoglobin A1C (HbA1C), homeostatic model assessment for insulin resistance (HOMA-IR), and alanine aminotransferase (ALT) levels. Our findings suggest that zonulin may be a non-invasive biomarker involved in the pathogenesis of GDM. Further large-scale studies are needed on this subject. View Full-Text
Keywords: zonulin; gestational diabetes mellitus; pregnancy; intestinal permeability zonulin; gestational diabetes mellitus; pregnancy; intestinal permeability
►▼ Show Figures 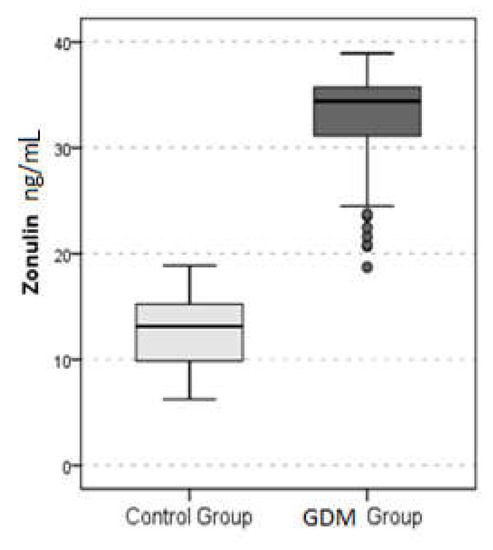