Alcoholic and non-alcoholic liver disease (NAFLD) are the two major causes of fatty liver disease. Alcoholic liver disease (ALD) is the third leading preventable cause of death in the United States accounting for 79,000 deaths annually [1] and steatosis secondary to obesity is the number one cause of elevated liver enzymes in the ambulatory population. NAFLD is a manifestation of the metabolic syndrome whose incidence is rising due to increased inactivity and availability of high calorie foods while excess ethanol intake is the driving force for ALD. ALD shares its histology with nonalcoholic counterpart where a spectrum of findings ranging from hepatic steatosis, alcoholic hepatitis and cirrhosis can be noted. Histological features of ethanol ingestion include hepatocyte ballooning, spotty necrosis, Mallory bodies and macrocytic steatosis, which are identical to nonalcoholic steatohepatitis (NASH) [2].
Excessive ethanol ingestion can cause mitochondrial dysfunction leading to disrupted function of the hepatocyte. Ethanol disrupts mitochondria by damaging mitochondrial DNA and causes effects on translation of proteins leading to inhibition of mitochondrial protein synthesis [3]. This leads to energy depravation for the hepatocyte and overproduction of reactive oxygen species leading to lipid accumulation and oxidative stress. Lipid accumulation, in turn, can lead to steatohepatitis and eventual cirrhosis.
Higher levels of aerobic fitness have been shown to be associated with reduced incidence of NAFLD in both animal models and human studies [4,5]. In addition, high aerobic fitness has been shown to be a good predictor of greater longevity while lower aerobic fitness is a predictor of early mortality [6]. Moreover, mitochondrial dysfunction has been linked to development of NAFLD and its progression to NASH [7]. Additionally, in humans the activity of mitochondrial respiratory chain complexes has been shown to be impaired in NASH [8].
A novel model in which rats are artificially selected over several generations for high and low intrinsic endurance/aerobic capacity resulting in high capacity (HCR) and low capacity (LCR) runners was developed to study the effects of high aerobic fitness and protection from metabolic disease [9]. We found that HCR rats are resistant to high fat diet induced obesity and insulin resistance by virtue of increased skeletal muscle oxidative capacity [10]. Additionally, we reported that the HCR strain has elevated hepatic mitochondrial content and oxidative capacity, and LCR rats have reduced hepatic mitochondrial oxidative capacity that increases the susceptibility to hepatic steatosis and liver injury [11]. HCR rats also show protection against high fat diet induced reactive oxygen species production in the kidney [12].
The paucity of literature regarding intrinsic aerobic capacity and ethanol intake has led us to investigate the relationship of the environmental stressor ethanol on high intrinsic aerobic capacity. The aim of this study was to determine if the elevated mitochondrial content and oxidative capacity in a rat bred for high aerobic capacity provided the ability to reduce the damaging effects from ethanol consumption on the liver. As ethanol is known to cause steatosis and inflammation of the liver, we hypothesize that HCR rats fed ethanol would be “metabolically” protected against hepatic steatosis and liver injury from ethanol.

There were no significant differences between HCR-C and HCR-E treated animals for body weight or serum glucose, insulin, FFAs (free fatty acids), or TGs (triglycerides) (Table 1). In addition, due to the pair feeding design, the food consumption also did not differ between groups.

Liver TG accumulation measured by lipid extraction was significantly greater in HCR-E group as compared to HCR-C group (p = 0.02) (Figure 1). Increased macro- and micro-vesicular steatosis also was noted in the HCR-E rats (Figure 1). No markers of injury such as ballooned hepatocytes, increased neutrophils or Mallory-Weiss bodies were noted (Figure 1). In addition, serum ALT levels did not differ significantly between HCR-E and HCR-C groups (Figure 1). 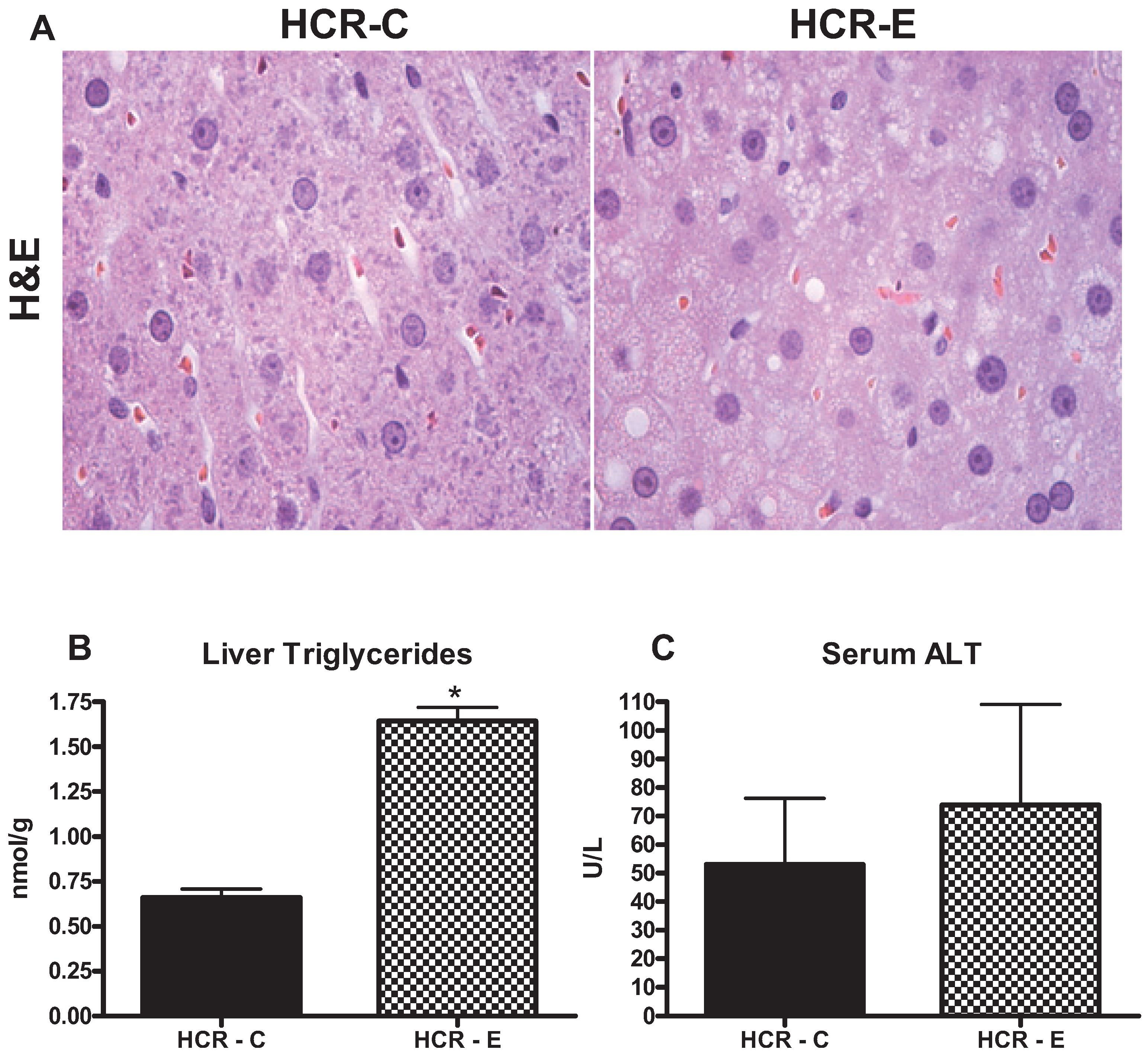 Ethanol consumption significantly reduced total palmitate oxidation (CO2 + ASMs; p = 0.03), but did not lower complete palmitate oxidation to CO2 (Figure 2). This may be explained by lower β-HAD activity, the rate-limiting step in fatty acid oxidation, which was also statistically lower in HCR-E animals (p = 0.01) (Figure 2). However, citrate synthase activity was significantly elevated in the HCR-E group (p < 0.05, Figure 2). Taken together, these data suggest reduced hepatic fatty mitochondrial function as a mechanism for hepatic steatosis in the HCR-E animals.

In order to examine the impact of chronic ethanol consumption on antioxidative parameters in the liver of the HCR rats, we assessed hepatic SOD activity, GSH and GSSG concentrations (Figure 3). Ethanol intake significantly reduced hepatic SOD activity and also concentrations of both reduced and oxidized glutathione compared with the HCR-C animals (p < 0.05) (Figure 3). 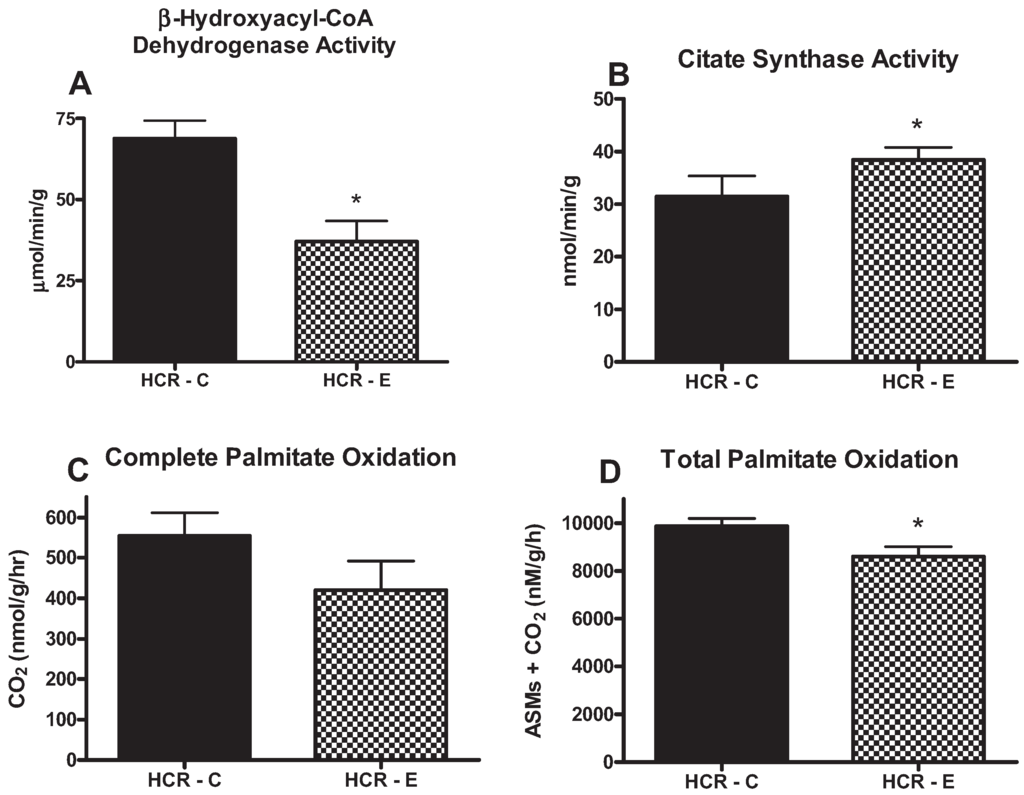 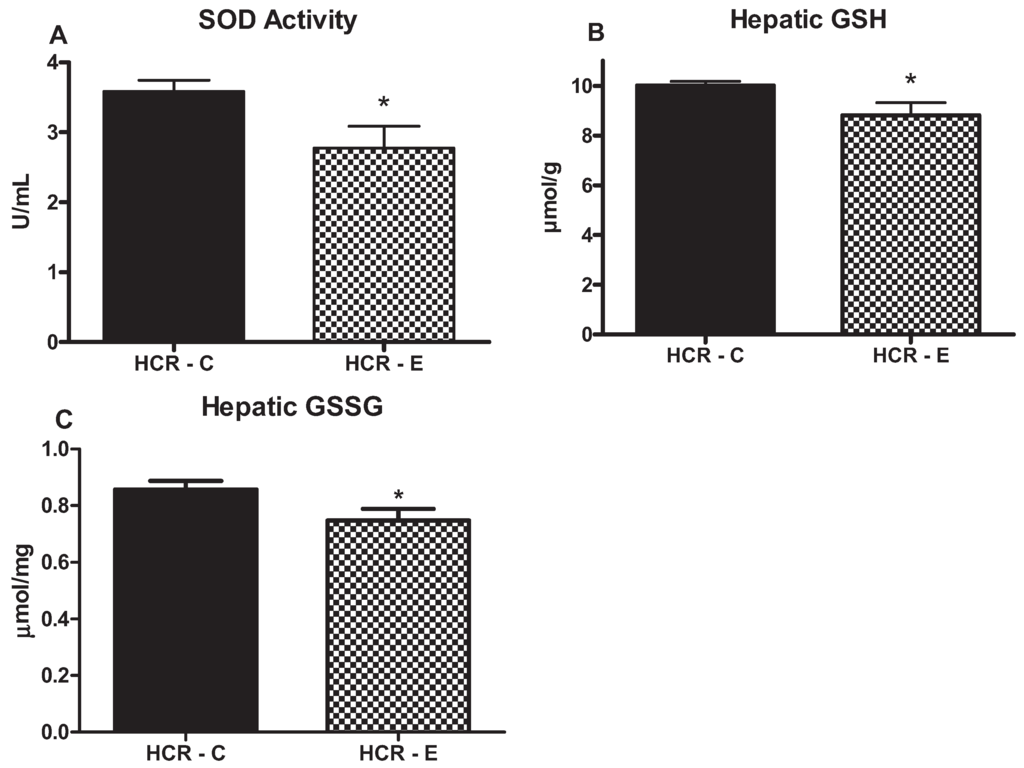 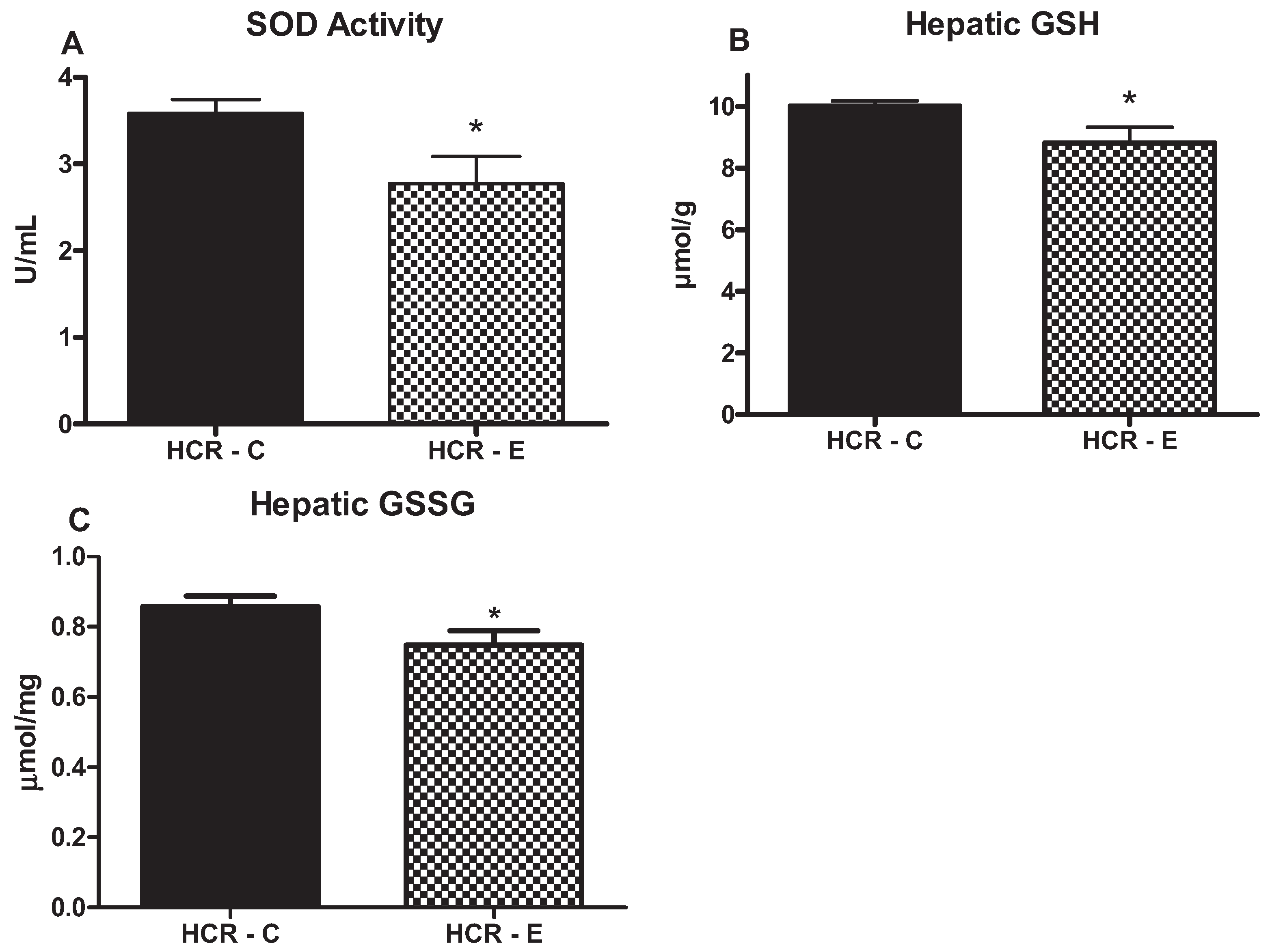 To assess the effects of chronic ethanol intake on markers of hepatic TG export, we examined the protein content of MTP, the rate limiting step in hepatic TG export from hepatocytes (Figure 4) and apoB-100 mRNA and protein content, which accepts TGs from MTP and the newly formed lipoprotein is then excreted from the hepatocyte. The addition of ethanol to HCR rats decreased both the hepatic apoB-100 and MTP protein content (p < 0.05, Figure 4). However, the level of apoB-100 mRNA was significantly increased (p < 0.05).

The animal protocols were approved by the Institutional Animal Care and Use Committees at the University of Missouri and the University of Michigan and the Subcommittee for Animal Safety at the Harry S. Truman Memorial VA Hospital. The development of LCR and HCR rats has previously been described [9,10]. Two-way artificial selective breeding was used to create low capacity runner (LCR) and high capacity runner (HCR) strains that were divergent for treadmill running capacity (run time to exhaustion on a graded exercise test). The N:NIH stock of rats served as the founder population [9]. In brief, the 13 lowest and 13 highest capacity rats of each sex were selected from the founder population and randomly paired for breeding. At each subsequent generation, within-family selection from 13 mating pairs was practiced for each line. The use of 13 families maintains a relatively low coefficient for inbreeding (<0.01/generation) and maximizes the retention of genetic variation. After the rats were phenotyped for running capacity, they were exposed to no further exercise training or testing and only underwent normal cage activity. For the current study, only the HCR animals were examined, because we have recently shown that the LCR rats are susceptible to the development of hepatic steatosis under normal low-fat chow dietary conditions [11].
The Lieber-Decarli liquid diet with and without ethanol (7% v/v) was given to HCR rats (14 to 20 weeks old) [26]. HCR rats were divided into ethanol (HCR-E) and control (HCR-C) groups (n = 8 per group) matched by their initial body weights and were pair fed to assure isocaloric intake. Treatment continued for six weeks in 12 h light/12 h dark cycle at 22 °C. Animals were fed daily and weighed weekly through the duration of the study. On the morning of animal sacrifice, the rats were injected with sodium pentobarbital (100 mg/kg), blood was collected from the aorta, animals were further exsanguinated and tissues were frozen at −80 °C, placed in RNAlater, or formalin-fixed.

Intrahepatic lipid content was obtained by weighing ~30 mg of liver and adding 1 mL of lipid extraction solution made from 1:2 (vol:vol) methanol:chloroform. The solution was homogenized for 30 s and left overnight at 4 °C with gentle shaking. One milliliter of 4 mM MgCl was added, vortexed, and centrifuged for 1 h at 1000× g at 4 °C. The aqueous phase was removed. The remaining organic phase was evaporated overnight, and 100 µL of 3:2 (vol:vol) butanol:triton-x114 was added. Lipid content was measured via a commercially available kit from Sigma (F6428) and TG concentrations were expressed as nmol/g wet weight as previously described [32].

Western blot analyses were performed for the determination of the protein content of apo-B100 (Abcam, Cambridge, MA, USA) and microsomal triglyceride transfer protein (MTP; Santa Cruz Biotechnology Inc., Santa Cruz, CA, USA) using methods previously described [32,33]. In order to control for equal protein loading and transfer, the membranes were stained with 0.1% amido-black (Sigma, St. Louis, MO, USA) as previously described [32]. The total protein staining for each lane was quantified and these values were used to correct for any differences in protein loading or transfer of all band densities.

Apo-B100 mRNA expression was quantified by real-time PCR using the ABI 7000 Sequence Detection System and software. Liver samples were removed from RNA later and then pulverized in RLT buffer using the Qiagen® TissueLyser system with subsequent RNA isolation from the RNeasy kit, with the optional DNaseI step (Qiagen, Valencia, CA, USA). Purity was ensured and concentration determined with a spectrophotometer (Nano Drop 1000, Thermo Scientific, Waltham, MA, USA). Reverse transcription was performed by combining RNA with the reverse transcription reaction mixture (Nuclease-Free Water, ImProm-II 5× Reaction Buffer, MgCl2, dNTP mix, and ImProm-II Reverse Transcriptase, (Promega, Madison, WI, USA) and cDNA was synthesized. The reaction mixture (Nuclease-Free Water, 18S, and apo-B100 primers and probe, both forward and reverse transcriptases, and TAQman Master Mix (ABI)) was loaded to a 96-well microplate, along with the cDNA sample (50 ng) and placed into the ABI 7000 Sequence Detection System for polymerization. After polymerization, results were quantified using the ddCT method relative to 18S. Comparison of the differences in raw CT values did not differ (p = 0.5) between groups, indicating that 18S mRNA was an appropriate normalizer.

Statistics were carried out by using software SPSS 15.0 (Chicago, IL, USA). Group differences were examined by independent samples t-test. Values are reported as means ± SE, and p-values of <0.05 were considered statistically significant.

The authors also would like to thank the Veterinary Medicine Diagnostics Laboratory at the University of Missouri for help with the histological sections and serum ALT measurements. This work was supported with resources and the use of facilities at the Harry S. Truman Memorial Veterans Hospital in Columbia, MO, USA and a VA grant support VHA-CDA2 BX001299 (RSR). The LCR-HCR rat model resource was funded by the Office of Research Infrastructure Programs/OD grant R24OD010950 and by grant R01DK099034 (to Lauren G. Koch and Steven L. Britton) from the National Institutes of Health. We acknowledge the expert care of the rat colony provided by Molly Kalahar and Lori Heckenkamp. Contact: Lauren G. Koch ([email protected]) or Steven L. Britton ([email protected]) for information on the LCR and HCR rats: these rat models are maintained as an international resource with support from the Department of Anesthesiology at the University of Michigan, Ann Arbor, Michigan.