Alcohol and Apoptosis: Friends or Foes?

Binge drinking associated with chronic alcohol consumption is a major public health concern in the United States and around the globe [1,2,3,4]. Binge drinking in adolescent and young adult populations is rising at alarming proportions [5,6]. Most of the patients admitted to hospital with liver disease are alcoholics with binge drinking patterns [2,3,4]. Heavy binge drinking by chronic alcohol abusers is the trigger for augmenting liver injury [7,8,9] but the molecular mechanism sensitizing the progression of liver injury by binge after chronic ethanol intake is poorly understood.
Oxidative stress, increase in adenosine levels, and dysregulated methionine metabolism are considered to be contributing factors for the progression of liver injury [10,11,12,13] and the role of epigenetic mechanisms mediating progression of alcoholic liver injury is increasingly being recognized [14,15]. Among the epigenetic factors regulating gene expression, differential pattern of epigenetic histone modifications also determine activation of different sets of genes. Stable epigenetic histone modifications impact long term and transgenerational effects on gene expression but dynamic changes contribute to short term or prolonged effects on gene expression [16,17]. Epigenetic histone modifications are implicated in liver injury by binge [14,15,18,19,20,21,22,23,24], chronic alcohol consumption [25,26,27,28], and chronic alcohol administration followed by binge [29,30].
We have shown in a clinically relevant rat model that chronic ethanol followed by repeat ethanol binge is accompanied by augmentation of liver injury [30]. In the present study, we have utilized mice model to examine the effects and potential mechanisms underlying alcohol induced liver injury [31,32]. 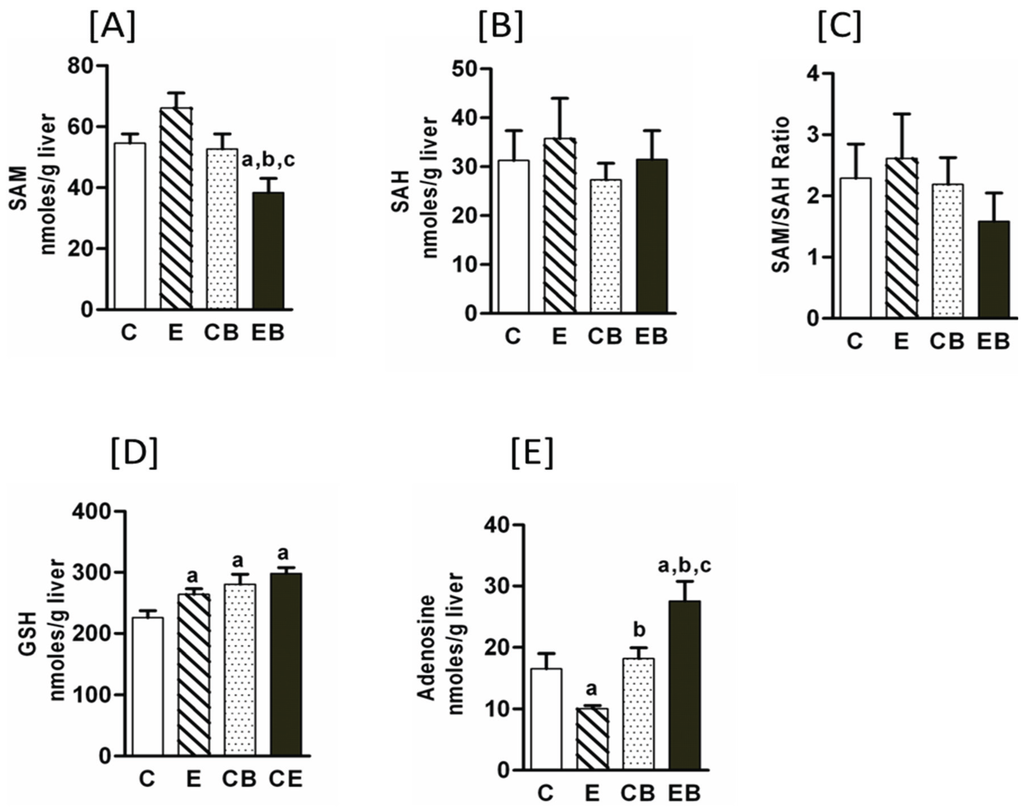 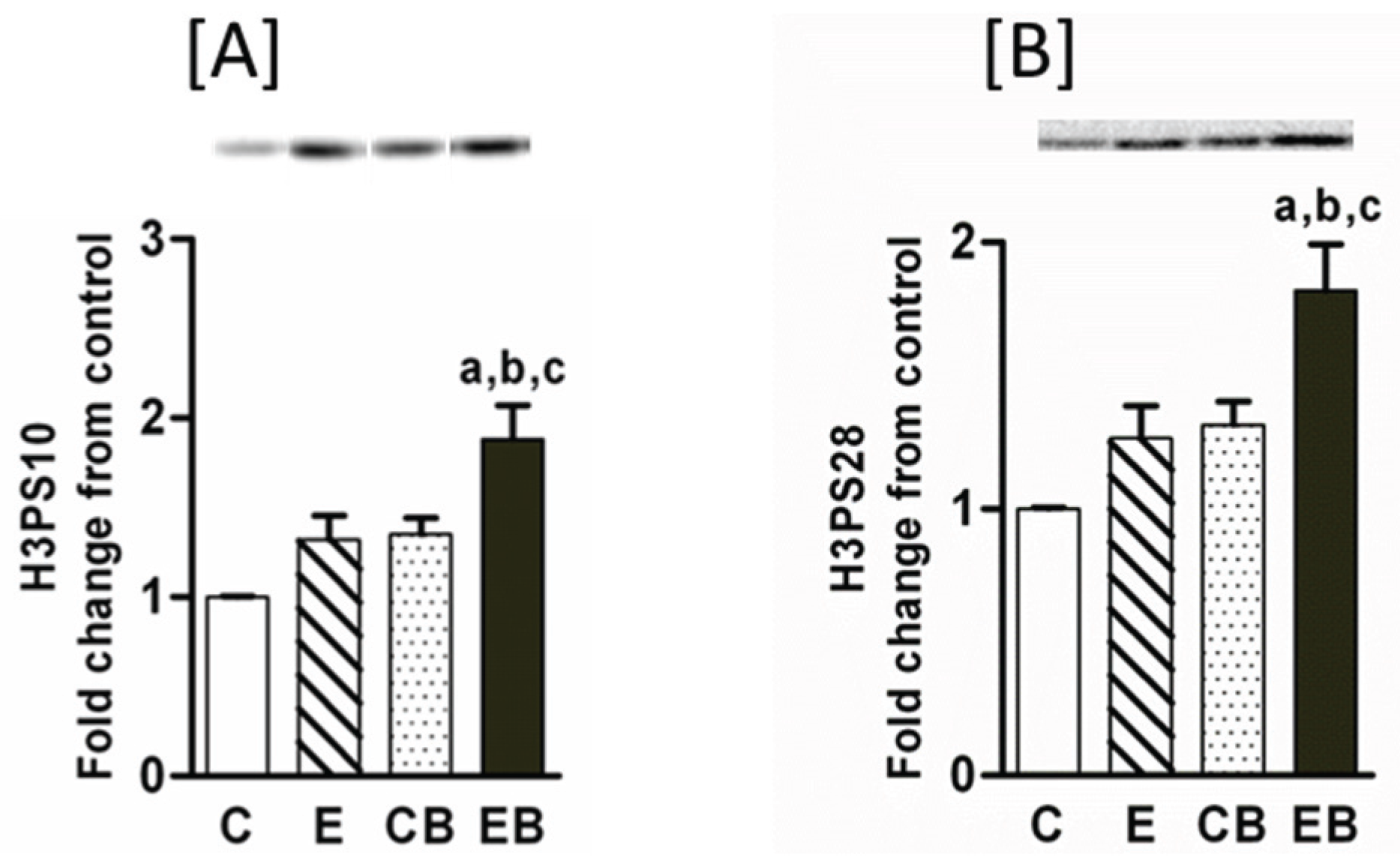 Increased expression of HAT GCN5 and increased H3K9 acetylation by ethanol occurs in hepatoma cells [36]. Therefore we determined GCN5 protein levels in the liver nuclear extracts. GCN5 levels increased in chronic ethanol, binge, and chronic ethanol binge groups (Figure 6A) although H3K9 acetylation was significantly increased only in binge group (Figure 5A). It is not known if the differential pattern of GCN5 expression and H3K9 acetylation are due to altered levels of histone deacetylases. We therefore determined HDAC3 levels since HDAC3 levels are increased in acute ethanol administration in mice [21]. The HDAC3 protein levels in the nuclear extracts were increased in all three groups with maximum increase in the binge group but this increase was not statistically different from other groups (Figure 6B). 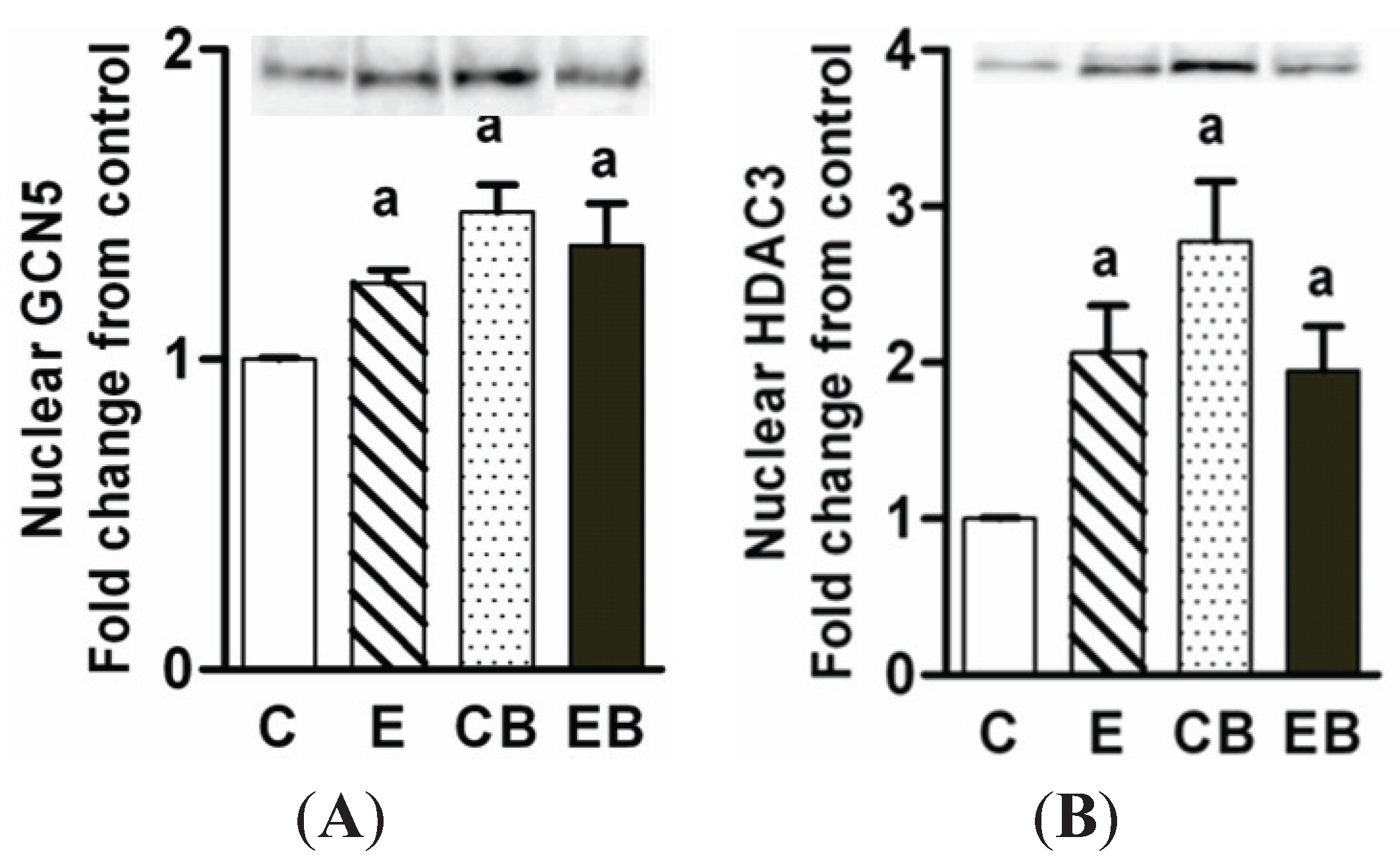 Phosphorylated CREB (cyclic AMP response element binding protein) has been shown to stimulate CBP/p300 mediated acetylation of H3K9 and is one of the important transcriptional regulator of hepatic metabolic and inflammatory responses [35,37,38].
Phosphorylation of CREB that usually occurs in the cytosol facilitates its translocation into the nucleus [37,38]. Therefore, we determined the levels of phosphorylated CREB (P-CREB) and CREB protein in the whole cell (Figure 7A–C) and nuclear extracts (Figure 7D–F). In the whole cell extracts P-CREB increased in all the groups (Figure 7A) but the total CREB protein did not change in either of the groups (Figure 7B). However, there was a modest but statistically significant increase in P-CREB in binge (CB) and chronic ethanol-binge (EB) groups when compared to chronic ethanol (E) group (Figure 7A). The ratio of P-CREB/CREB was similar in all the three groups (Figure 7C). In contrast, in the nuclear fraction the levels of P-CREB gradually decreased in the following order: chronic > binge alone > chronic-binge (Figure 7D). The decrease in the binge group was more marked compared to chronic ethanol group but the most significant decrease occurred in the chronic ethanol-binge group. However, nuclear levels of CREB protein was not significantly different among the groups (Figure 7E) and changes in the ratio of P-CREB/CREB paralleled changes in nuclear levels of P-CREB (Figure 7F).

Seven week old C57BL/6J male mice, were purchased from Harlan (Indianapolis, IN, USA) and housed under a 12-h/12-h light/dark cycle. Animals were permitted ad libitum consumption of standard laboratory chow for one week to acclimatize. This was followed by feeding animals with Lieber-DeCarli liquid diet (Dyets, Inc., Bethlehem, PA, USA; [29]). Ethanol was progressively introduced into the liquid diet starting at 1% (wt/vol) for 2 days, increased to 2% for 2 days, 3% for 2 days, and 4% from day 7 onwards for 4 weeks. Pair-fed control mice were given a liquid diet in which ethanol was replaced by dextrin/maltose to maintain the isocaloric intake in the two groups. At the end of 4 weeks of feeding, mice were divided into four groups: Control group (C) received water, chronic ethanol group (E) received water, control-binge group (CB) received three doses of ethanol, and chronic ethanol-binge group (EB) received three doses of ethanol. The three doses of binge were administered intragastrically (3.5 gm/kg body weight) after diluting ethanol to 32% (v/v) in sterile water and orally gavaged to the stomach using a 20-gauge stainless steel blunt tipped needle. The average amount of intragastric alcohol solution was about 0.45 mL. The three ethanol binge were given consecutively each 12 h apart. Four hours after the last binge ethanol administration blood and liver samples were collected. Liver was perfused with cold phosphate buffered saline containing phosphatase inhibitors before collection. A small portion of the liver was placed in formalin for immunohistochemistry and the reminder was frozen in liquid nitrogen and stored at −70 °C. The animal care and protocol used in this study was approved by the University of Missouri Animal Care Committee (Protocol #8175) and complied with NIH guide for the care and use of laboratory animals.

The whole cell extract and nuclear extracts were prepared at 4 °C as described earlier [30]. After homogenizing the frozen liver tissue in lysis buffer (containing 50 mM Tris. HCl. pH 7.4, 25 mM KCl, 5 mM MgCl2, 5 mM glycerophosphate, 1 mM EDTA, 1 mM Na-orthovanadate, 1 mM EGTA, 1 mM DTT, and Sigma protease inhibitor cocktail (p8340)), a small portion of the whole cell extract was saved. The remainder of the homogenate was layered over 1.0 M sucrose cushion. After centrifugation at 1600× g for 10 min at 4 °C, the cytosolic fraction (supernatant) was transferred to a precooled microcentrifuge tube, frozen in liquid nitrogen and stored at −70 °C. The nuclear pellet was further suspended in 1.0 M sucrose containing 0.25% NP-40 and passed through a 26-gauge needle 6 times and centrifuged at 1600× g for 10 min. This step removed contaminated endoplasmic reticulum and plasma membrane. The nuclear pellet was again re-suspended in 1.0 M sucrose and centrifuged at 1600× g for 10 min followed by washing the pellet once with homogenization buffer. The purity of the nuclear fraction was verified by the absence of b-tubulin and calreticulin and presence of histone H3 [30]. The nuclear extract was prepared in high salt detergent buffer (0.5 M NaCl, 1% Triton X-100, 1% deoxycholate and 0.1% SDS). Bio-Rad DC protein assay was used to determine the protein concentrations in whole cell extract and nuclear extract.
The whole liver lysate protein or nuclear fraction (40 µg) was separated by 10% or 15% SDS-PAGE followed transfer onto nitrocellulose membrane using Bio-Rad Trans-Blot apparatus. Membrane was washed with 20 mM Tris, pH 7.5, containing 0.1% Tween 20 and 150 mM NaCl (TBST) and blocked with TBST containing 5% nonfat dry milk for 2 h at room temperature. Membrane was incubated with primary antibody overnight at 4 °C in blocking buffer and washed with TBST, followed by incubation with corresponding secondary antibody conjugated with horseradish peroxidase for 1 h at room temperature. Immunoblots were visualized using chemiluminescent reagent (Pierce Chemicals, Rockford, IL, USA). LSA-3000 imaging system (Fujifilm Life Sciences, Stamford, Connecticut, USA) was used to capture chemiluminescence and Multi Gauge™ software (Fujifilm Life Sciences) was used for quantitation of immune blots. The chemiluminescence intensity was within the linear range of detection. Beta actin and histone H3 protein immune blots were used for equal protein loading of whole cell extracts and nuclear extracts respectively. Repeat immunoblotting was done by stripping the membrane using Restore Western blot stripping buffer (Pierce).

Data obtained from 4 animals in each group were used for analysis. The data are expressed as mean ± S.E.M. ANOVA was used for statistical analysis and differences with a p-value of <0.05 were considered statistically significant.

In conclusion, augmentation of liver injury by repeat acute binge in chronic ethanol treated mice is accompanied by increased levels of CYP2E1 protein, ALT, triglyceride, decrease in the SAM:SAH ratio, marked increase in hepatic adenosine levels, and increased H3 phosphorylation , a histone modification known to enhance TNFα gene expression. The association between gene polymorphism for CYP2E1, methionine metabolism, and TNFα has been considered in the alcoholic liver injury in humans [43]. Analogous changes observed in our acute on chronic model suggest that it may be a relevant experimental model for the study of progression of alcoholic liver injury. On the other hand, the increase in H2AX phosphorylation in binge but its suppression observed in the chronic ethanol binge group suggests that chronic ethanol intake antagonize the protective adaptive response of ethanol binge. The distinct pattern of hepatic methionine metabolism and epigenetic histone modifications but similar pattern of CYP2E1 protein induction in rat [30,33] and mouse (this study) models of ALD highlight common and distinct mechanisms of pathogenesis of liver damage. It may be tempting to suggest that the use of acute repeat binge on chronic ethanol intake for extended period of time may enhance alcoholic liver injury further mimicking the progression of liver injury in a setting commonly seen in humans.