Review
Sirtuins and Proteolytic Systems: Implications for Pathogenesis of Synucleinopathies
by

:
Insoluble and fibrillar forms of α-synuclein are the major components of Lewy bodies, a hallmark of several sporadic and inherited neurodegenerative diseases known as synucleinopathies. α-Synuclein is a natural unfolded and aggregation-prone protein that can be degraded by the ubiquitin-proteasomal system and the lysosomal degradation pathways. α-Synuclein is a target of the main cellular proteolytic systems, but it is also able to alter their function further, contributing to the progression of neurodegeneration. Aging, a major risk for synucleinopathies, is associated with a decrease activity of the proteolytic systems, further aggravating this toxic looping cycle. Here, the current literature on the basic aspects of the routes for α-synuclein clearance, as well as the consequences of the proteolytic systems collapse, will be discussed. Finally, particular focus will be given to the sirtuins’s role on proteostasis regulation, since their modulation emerged as a promising therapeutic strategy to rescue cells from α-synuclein toxicity. The controversial reports on the potential role of sirtuins in the degradation of α-synuclein will be discussed. Connection between sirtuins and proteolytic systems is definitely worth of further studies to increase the knowledge that will allow its proper exploration as new avenue to fight synucleinopathies.
Keywords:
α-synuclein; ubiquitin-proteasome system; chaperone-mediated autophagy; (macro)autophagy; aging; mitochondria; sirtuins

α-Synuclein (α-syn) is a presynaptic neuronal protein, with 140 amino acids, that was originally identified in association with synaptic vesicles in the presynaptic nerve terminal [1]. α-Syn is ubiquitously expressed in the brain, but it is also present in high amounts in other tissues, including red blood cells [2]. α-Syn’s normal function is still poorly understood, but it is known to be involved in vesicular trafficking, in the regulation of dopamine homeostasis/neurotransmission and in synaptic function/plasticity (reviewed in [2]). α-Syn also appears to influence, when present in low levels, the amount of SNARE complex at the nerve terminal either directly, as a chaperone, or indirectly through other effects on the synaptic vesicle cycle [3]. α-Syn is a major component of Lewy bodies (LB), the hallmark protein inclusions made up of insoluble and fibrillar forms of α-syn [4], implicated in the pathology of several neurodegenerative diseases known as synucleinopathies, including Parkinson disease (PD), dementia with Lewy bodies (DLB) and multiple system atrophy (MSA). Point mutations in the α-syn codifying gene, SNCA, such as A30P [5], A53T [6], E46K [7], G51D [8] and H50Q [9], and genomic multiplications of the SNCA wild type have been identified in families with autosomal-dominant forms of PD [10], indicating that even slight alterations in the α-syn levels could be a risk factor [11]. The mechanism of α-syn aggregation has been largely explored in different studies aiming to identify the toxic species responsible for neuronal dysfunction and death. Multiple studies in vivo and in vitro PD models showed a strong correlation between α-syn oligomers and neuronal toxicity (reviewed in [2,12]), sustaining that pre-fibrillar, soluble oligomeric α-syn forms are the most toxic α-syn species with a prominent pathogenic role in PD. More recently, it has been shown that α-syn, initially thought to be an exclusive intracellular protein, is secreted to extracellular milieu contributing for the spread of α-syn toxicity and progression of neurodegeneration [13,14,15]. This prion-like mechanism of α-syn spread has been associated with secretion of membrane vesicles, identified as exosomes [16,17]. Both α-syn monomers and toxic oligomers were found to be secreted by non-classical exocytic or endocytic pathways [2,18].
Cells have evolved a protein quality control system to face the danger posed by misfolded proteins, as α-syn monomers and toxic oligomers, and to keep proteostasis [19,20]. These protein quality control mechanisms comprise protein surveillance by molecular chaperones and the function of the two main protein degradation systems, the ubiquitin–proteasome system (UPS) and lysosome-mediated degradation [21,22,23,24,25,26,27,28,29]. Protein quality control mechanisms not only ensure that potential toxic species are detected and eliminated, preventing the accumulation of aberrant forms of proteins and reducing the risks of proteotoxicity, but are also intimately linked to the regulation of the early secretory pathway and protein regulated secretion, particularly lysosome-mediated degradation [30]. Several studies point out α-syn not only as a target of protein quality control mechanisms but also as capable of inhibiting and alter their function further contributing to the progression of neurodegeneration. This vicious cycle is even aggravated if one considered that the activity of the protein quality control mechanisms decreases during aging, a major risk factor for neurodegeneration. Clearly, a better understanding of α-syn proteostasis is aimed and synucleinopathies treatment would greatly benefit from it.
In this review, we will first discuss some basic aspects of the routes for α-syn clearance. Subsequently, we will address the consequences of the proteolytic systems collapse, a major contributor to the pathogenesis of neurodegenerative diseases that could be a primary cause for α-syn accumulation but also a secondary consequence of α-syn aggregates accumulation. Finally, the role of sirtuins on the proteostasis regulation and control will be reviewed as a promising window of opportunity for therapeutic intervention in PD based on proteostasis strategies that are likely to be of value for synucleinopathies. 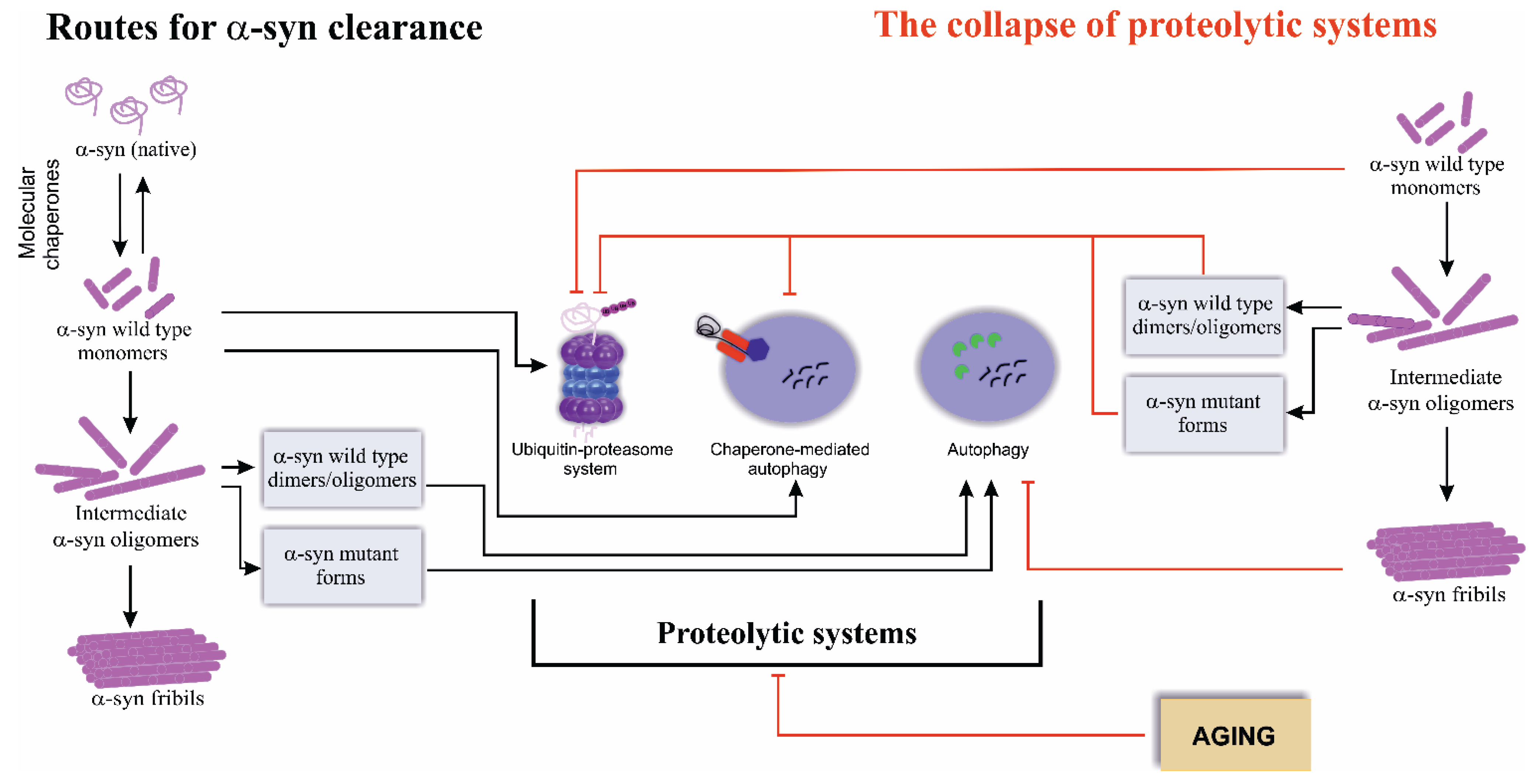 The routes for the clearance of the different assembled α-syn species (monomeric, oligomeric or fibrillary) are still controversial in spite of the intense investigations efforts that have been made. Several studies have shown that small and soluble oligomers of α-syn are preferentially degraded by the UPS, while the large oligomeric forms are cleared by autophagy [86], suggesting that in conditions of endogenous and increased α-syn protein burden the UPS is the clearance route, whereas under pathologic context, elevated α-syn levels or presence of oligomeric species, lysosome-mediated degradation is the driven pathway [56]. Among the two main lysosome-mediated degradation pathways, it has also been demonstrated that CMA degrades wild type α-syn monomers and dimers, but not oligomers or α-syn mutant forms that are substrates for autophagy degradation [31].
Summing up, it is clear that protein quality control mechanisms, both UPS and lysosome-mediated degradation pathways, are crucial for the clearance of the different α-syn species. Nevertheless, abnormal α-syn degradation by impairment of those mechanisms might have both beneficial and detrimental effects in synucleinopathies pathology. This anachronism is most probably explained by the fact that the decision in α-syn clearance and the selected route is likely dependent on the α-syn levels, assembly state (monomeric, oligomeric or fibrillary) and post-translational modifications as well as on the cell type, and the stage of the pathogenic process. Thus, the role of α-syn clearance on PD pathogenesis remains highly controversial and complex due to the looping cascade involving α-syn and proteolytic systems. In the next section, the consequences of proteolytic systems collapse will be discussed in the context of α-syn pathology.

3. The Collapse of Proteolytic Systems

4. The Role of Sirtuins on the Proteostasis Control

The relation between α-syn toxicity and proteostasis particularly proteolytic systems has proven infinitely more complex than ever imagined. Based on a wealth of studies in many different synucleinopathies models, it is now well appreciated that distinct proteolytic pathways are specifically activated in an attempt to degrade diverse α-syn species (conformational, mutated variants and post-translated modified). The progress in the knowledge on the proteolytic systems and α-syn biology/pathology revealed that proteolytic systems could become overload with high α-syn amounts but that various α-syn species could directly/indirectly promote their impairment and inhibition. Further confounding this scenario, aging, a major risk factor for the development of neurodegenerative diseases, is also associated with a decline of protein degradation systems function. The search for molecules able to rescue cells from α-syn toxicity has evidenced sirtuins as promising targets, particularly due to their impact on aging and on autophagy regulation. Nevertheless, similarly to what was found with proteolytic systems, the effects and regulation of sirtuins have proven to be extremely complex. Conflicting data shows opposing roles for sirtuins in the modulation of α-syn toxicity and the lack of knowledge on the mechanisms triggering protective or detrimental effects on synucleinopathies and whether they are mainly dependent of α-syn degradation and/or on mitochondria biogenesis.
Despite the controversial, current concepts on synucleinopathies accept proteolytic systems as a central player on α-syn pathology. Thus, deciphering the mechanisms by which the different proteolytic systems contribute to the elimination or accumulation of α-syn toxic and non-toxic species is therefore of utmost importance and can pave the way for development of new treatment strategies.

Belém Sampaio-Marques is supported by the fellowship SFRH/BPD/90533/2012 funded by the Fundação para a Ciência e Tecnologia (FCT, Portugal). The authors apologize for not citing the pioneering work of many colleagues, as this was not intended as an exhaustive review.

All authors contributed to the initial draft of this review, which was edited by Paula Ludovico.