The Assembly of Super-Complexes in the Plant Chloroplast

A transcription factor p53 is activated upon cellular exposure to endogenous and exogenous stresses, triggering either homeostatic correction or cell death. Depending on the stress level, often measurable as DNA damage, the dual outcome is supported by p53 binding to a number of regulatory and metabolic proteins. Apart from the nucleus, p53 localizes to mitochondria, endoplasmic reticulum and cytosol. We consider non-nuclear heterologous protein complexes of p53, their structural determinants, regulatory post-translational modifications and the role in intricate p53 functions. The p53 heterologous complexes regulate the folding, trafficking and/or action of interacting partners in cellular compartments. Some of them mainly sequester p53 (HSP proteins, G6PD, LONP1) or its partners (RRM2B, PRKN) in specific locations. Formation of other complexes (with ATP2A2, ATP5PO, BAX, BCL2L1, CHCHD4, PPIF, POLG, SOD2, SSBP1, TFAM) depends on p53 upregulation according to the stress level. The p53 complexes with SIRT2, MUL1, USP7, TXN, PIN1 and PPIF control regulation of p53 function through post-translational modifications, such as lysine acetylation or ubiquitination, cysteine/cystine redox transformation and peptidyl-prolyl cis-trans isomerization. Redox sensitivity of p53 functions is supported by (i) thioredoxin-dependent reduction of p53 disulfides, (ii) inhibition of the thioredoxin-dependent deoxyribonucleotide synthesis by p53 binding to RRM2B and (iii) changed intracellular distribution of p53 through its oxidation by CHCHD4 in the mitochondrial intermembrane space. Increasing knowledge on the structure, function and (patho)physiological significance of the p53 heterologous complexes will enable a fine tuning of the settings-dependent p53 programs, using small molecule regulators of specific protein–protein interactions of p53. View Full-Text
Keywords: intracellular localization of p53; heterologous non-nuclear complexes of p53; p53 sequestration; p53 trafficking; thiol/disulfide-dependent regulation of p53 functions intracellular localization of p53; heterologous non-nuclear complexes of p53; p53 sequestration; p53 trafficking; thiol/disulfide-dependent regulation of p53 functions
►▼ Show Figures 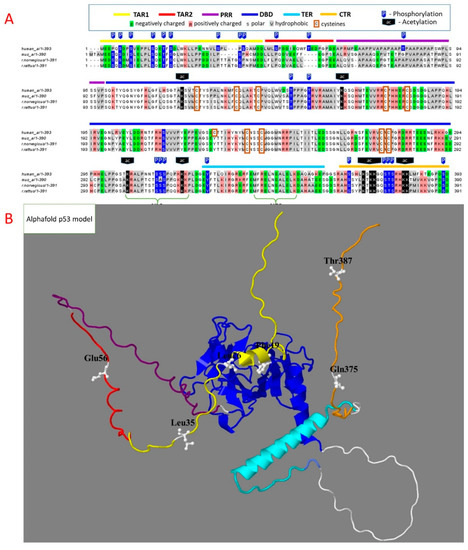