Effect of Surface Roughness on Aggregation of Polypeptide Chains: A Monte Carlo Study
Next Article in Special Issue

The Role of Androgens and Androgen Receptor in Human Bladder Cancer

Galectins bind various pathogens through recognition of distinct carbohydrate structures. In this work, we examined the binding of four human galectins to the Gram-negative bacteria Klebsiella pneumoniae (Kpn) and non-typeable Haemophilus influenzae (NTHi), which display different surface glycans. In particular, Kpn cells are covered by a polysaccharide capsule and display an O-chain-containing lipopolysaccharide (LPS), whereas NTHi is not capsulated and its LPS, termed lipooligosacccharide (LOS), does not contain O-chain. Binding assays to microarray-printed bacteria revealed that galectins-3, -4, and -8, but not galectin-1, bind to Kpn and NTHi cells, and confocal microscopy attested binding to bacterial cells in suspension. The three galectins bound to array-printed Kpn LPS. Moreover, analysis of galectin binding to mutant Kpn cells evidenced that the O-chain is the docking point for galectins on wild type Kpn. Galectins-3, -4, and -8 also bound the NTHi LOS. Microarray-assisted comparison of the binding to full-length and truncated LOSs, as well as to wild type and mutant cells, supported LOS involvement in galectin binding to NTHi. However, deletion of the entire LOS oligosaccharide chain actually increased binding to NTHi cells, indicating the availability of other ligands on the bacterial surface, as similarly inferred for Kpn cells devoid of both O-chain and capsule. Altogether, the results illustrate galectins’ versatility for recognizing different bacterial structures, and point out the occurrence of so far overlooked galectin ligands on bacterial surfaces. View Full-Text
Keywords: bacteria microarrays; galectins; host–pathogen interactions; Klebsiella pneumoniae; non-typeable Haemophilus influenzae; lipopolysaccharides; lipooligosaccharides bacteria microarrays; galectins; host–pathogen interactions; Klebsiella pneumoniae; non-typeable Haemophilus influenzae; lipopolysaccharides; lipooligosaccharides
►▼ Show Figures 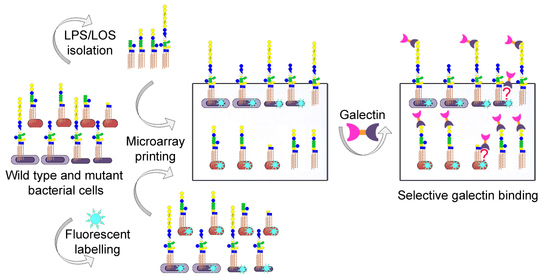