Objective: Epidemiological studies link hyperlipidemia with increased risk for abdominal aortic aneurysms (AAAs). However, the influence of lipid-lowering drugs statins on prevalence and progression of clinical and experimental AAAs varies between reports, engendering controversy on the association of hyperlipidemia with AAA disease. This study investigated the impact of hypercholesterolemia on elastase-induced experimental AAAs in mice. Methods: Both spontaneous (targeted deletion of apolipoprotein E) and induced mouse hypercholesterolemia models were employed. In male wild type (WT) C57BL/6J mice, hypercholesterolemia was induced via intraperitoneal injection of an adeno-associated virus (AAV) encoding a gain-of-function proprotein convertase subtilisin/kexin type 9 mutation (PCSK9) followed by the administration of a high-fat diet (HFD) (PCSK9+HFD) for two weeks. As normocholesterolemic controls for PCSK9+HFD mice, WT mice were infected with PCSK9 AAV and fed normal chow, or injected with phosphate-buffered saline alone and fed HFD chow. AAAs were induced in all mice by intra-aortic infusion of porcine pancreatic elastase and assessed by ultrasonography and histopathology. Results: In spontaneous hyper- and normo-cholesterolemic male mice, the aortic diameter enlarged at a constant rate from day 3 through day 14 following elastase infusion. AAAs, defined as a more than 50% diameter increase over baseline measurements, formed in all mice. AAA progression was more pronounced in male mice, with or without spontaneous hyperlipidemia. The extent of elastin degradation and smooth muscle cell depletion were similar in spontaneous hyper- (score 3.5 for elastin and 4.0 for smooth muscle) and normo- (both scores 4.0) cholesterolemic male mice. Aortic mural macrophage accumulation was also equivalent between the two groups. No differences were observed in aortic accumulation of CD4+ or CD8+ T cells, B cells, or mural angiogenesis between male spontaneous hyper- and normocholesterolemic mice. Similarly, no influence of spontaneous hypercholesterolemia on characteristic aneurysmal histopathology was noted in female mice. In confirmatory experiments, induced hypercholesterolemia also exerted no appreciable effect on AAA progression and histopathologies. Conclusion: This study demonstrated no recognizable impact of hypercholesterolemia on elastase-induced experimental AAA progression in both spontaneous and induced hypercholesterolemia mouse models. These results add further uncertainty to the controversy surrounding the efficacy of statin therapy in clinical AAA disease. View Full-Text
Keywords: abdominal aortic aneurysm; hypercholesterolemia; high-fat diet; PCSK9; leukocytes; angiogenesis abdominal aortic aneurysm; hypercholesterolemia; high-fat diet; PCSK9; leukocytes; angiogenesis
►▼ Show Figures 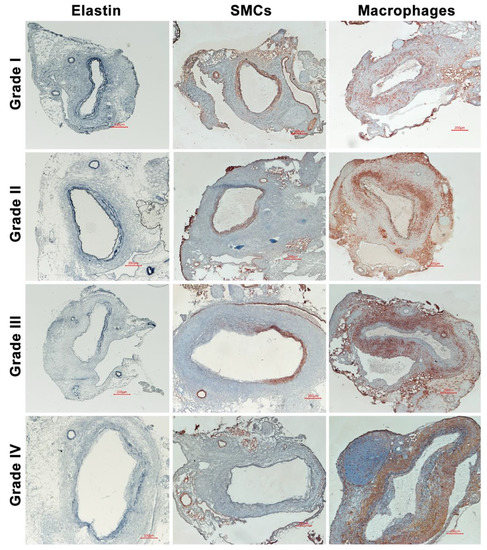