Malaria is an enormous threat to public health, due to the emergence of Plasmodium falciparum resistance to widely-used antimalarials, such as chloroquine (CQ). Current antimalarial drugs are aromatic heterocyclic derivatives, most often containing a basic component with an added alkyl chain in their chemical structure. While these drugs are effective, they have many side effects. This paper presents the synthesis and preliminary physicochemical characterisation of novel bioinspired imidazolidinedione derivatives, where the imidazolidinedione core was linked via the alkylene chain and the basic piperazine component to the bicyclic system. These compounds were tested against the asexual stages of two strains of P. falciparum—the chloroquine-sensitive (D10) and chloroquine-resistant (W2) strains. In parallel, in vitro cytotoxicity was investigated on a human keratinocyte cell line, as well as their hemolytic activity. The results demonstrated that the antiplasmodial effects were stronger against the W2 strain (IC50 between 2424.15–5648.07 ng/mL (4.98–11.95 µM)), compared to the D10 strain (6202.00–9659.70 ng/mL (12.75–19.85 µM)). These molecules were also non-hemolytic to human erythrocytes at a concentration active towards the parasite, but with low toxicity to mammalian cell line. The synthetized derivatives, possessing enhanced antimalarial activity against the CQ-resistant strain of P. falciparum, appear to be interesting antimalarial drug candidates. View Full-Text
Keywords: Imidazolidine-2,4-dione derivatives; Plasmodium falciparum; antiparasitic agents; antimalarial; drug resistance; cytotoxicity; hemolysis Imidazolidine-2,4-dione derivatives; Plasmodium falciparum; antiparasitic agents; antimalarial; drug resistance; cytotoxicity; hemolysis
►▼ Show Figures 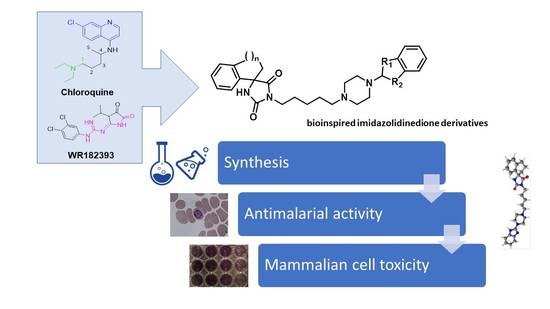