Regulation of p27Kip1 and p57Kip2 Functions by Natural Polyphenols

In numerous instances, the fate of a single cell not only represents its peculiar outcome but also contributes to the overall status of an organism. In turn, the cell division cycle and its control strongly influence cell destiny, playing a critical role in targeting it towards a specific phenotype. Several factors participate in the control of growth, and among them, p27Kip1 and p57Kip2, two proteins modulating various transitions of the cell cycle, appear to play key functions. In this review, the major features of p27 and p57 will be described, focusing, in particular, on their recently identified roles not directly correlated with cell cycle modulation. Then, their possible roles as molecular effectors of polyphenols’ activities will be discussed. Polyphenols represent a large family of natural bioactive molecules that have been demonstrated to exhibit promising protective activities against several human diseases. Their use has also been proposed in association with classical therapies for improving their clinical effects and for diminishing their negative side activities. The importance of p27Kip1 and p57Kip2 in polyphenols’ cellular effects will be discussed with the aim of identifying novel therapeutic strategies for the treatment of important human diseases, such as cancers, characterized by an altered control of growth. View Full-Text
Keywords: p27Kip1; p57Kip2; polyphenols; EGCG; resveratrol p27Kip1; p57Kip2; polyphenols; EGCG; resveratrol
►▼ Show Figures 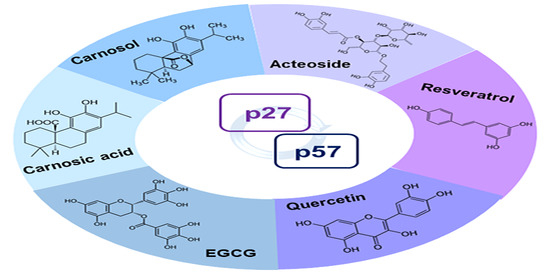