From Seeds to Fibrils and Back: Fragmentation as an Overlooked Step in the Propagation of Prions and Prion-Like Proteins

Pulmonary fibrosis is a severe lung disease with progressive worsening of dyspnea, characterized by chronic inflammation and remodeling of lung parenchyma. Carbonic anhydrases are a family of zinc-metallo-enzymes that catalyze the reversible interconversion of carbon-dioxide and water to bicarbonate and protons. Carbonic Anhydrase Inhibitor (CAI) exhibited anti-inflammatory effects in animals with permanent-middle-cerebral artery occlusion, arthritis and neuropathic pain. The pharmacological profile of a new class of hybrid compounds constituted by a CAI connected to a Nonsteroidal-Anti-Inflammatory Drug (NSAID) was studied in the modulation of inflammation and fibrosis. In-vitro tests were performed to assess their effects on cyclo-oxygenase enzyme (COX)-1 and COX-2, namely inhibition of platelet aggregation and thromboxane B2 production in the human-platelet-rich plasma, and reduction of Prostaglandin-E2 production in lipopolysaccharide-treated-RAW-264.7 macrophage cell line. The activity of compound 3, one of the most active, was studied in a model of bleomycin-induced lung fibrosis in C57BL/6 mice. The hybrid compounds showed a higher potency in inhibiting PGE2 production, but not in modifying the platelet aggregation and the TXB2 production in comparison to the reference molecules, indicating an increased activity in COX-2 inhibition. In the in-vivo murine model, the compound 3 was more effective in decreasing inflammation, lung stiffness and oxidative stress in comparison to the reference drugs given alone or in association. In conclusion, these CAI-NSAID hybrid compounds are promising new anti-inflammatory drugs for the treatment of lung chronic inflammatory diseases. View Full-Text
Keywords: NSAIDs; CAI; inflammation; pulmonary fibrosis; COX-1; COX-2 NSAIDs; CAI; inflammation; pulmonary fibrosis; COX-1; COX-2
►▼ Show Figures 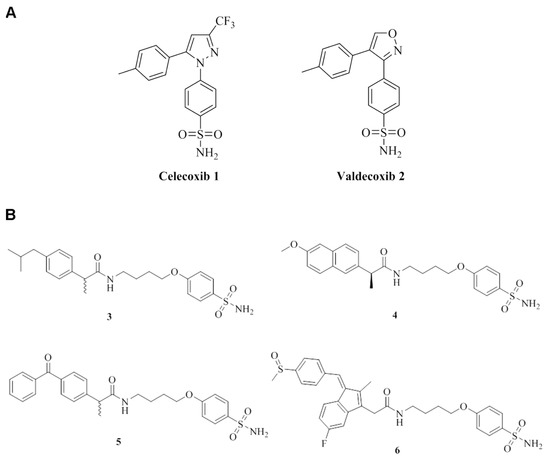