Numerous studies showed that sustained obesity results in accumulation of bioactive lipid derivatives in several tissues, including skeletal muscle, which further contributes to the development of metabolic disturbances and insulin resistance (IR). The latest data indicate that a potential factor regulating lipid and glucose metabolism is a phytocannabinoid—cannabidiol (CBD), a component of medical marijuana (Cannabis). Therefore, we aimed to investigate whether chronic CBD administration influences bioactive lipid content (e.g., ceramide (CER)), as well as glucose metabolism, in the red skeletal muscle (musculus gastrocnemius) with predominant oxidative metabolism. All experiments were conducted on an animal model of obesity, i.e., Wistar rats fed a high-fat diet (HFD) or standard rodent chow, and subsequently injected with CBD in a dose of 10 mg/kg or its solvent for two weeks. The sphingolipid content was assessed using high-performance liquid chromatography (HPLC), while, in order to determine insulin and glucose concentrations, immunoenzymatic and colorimetric methods were used. The protein expression from sphingolipid and insulin signaling pathways, as well as endocannabinoidome components, was evaluated by immunoblotting. Unexpectedly, our experimental model revealed that the significantly intensified intramuscular de novo CER synthesis pathway in the HFD group was attenuated by chronic CBD treatment. Additionally, due to CBD administration, the content of other sphingolipid derivatives, i.e., sphingosine-1-phosphate (S1P) was restored in the high-fat feeding state, which coincided with an improvement in skeletal muscle insulin signal transduction and glycogen recovery.
Keywords: cannabidiol; obesity; insulin resistance; ceramide; sphingolipids; glucose; insulin signaling cannabidiol; obesity; insulin resistance; ceramide; sphingolipids; glucose; insulin signaling

Currently, obesity is a widespread medical condition reaching high rates in children and adults. Since 1975, the worldwide incidence of obesity increased almost threefold according to the World Health Organization [1]. The majority of obesity cases is the consequence of excessive food consumption and a sedentary lifestyle [2]. Sustained obesity disrupts metabolic processes and pathways, especially glucose and fatty acid (FA) metabolism, which is the background of lipotoxicity and insulin resistance (IR) [3], leading to the further development of metabolic syndrome (MetS) and type 2 diabetes mellitus (T2D) [4].
An increased intake of fatty acids in a diet at an advanced stage of obesity progression results in adipocyte overload and the abnormal accumulation of bioactive lipid fractions in several tissues, including skeletal and cardiac muscle, as well as the liver [5,6]. Over the last several years, attention was paid to sphingolipids, the synthesis of which is increased during the overfeeding state (Scheme 1) [7]. Importantly, recent data clearly demonstrated that sphingolipids are not only structural components of the cells; they also act as signaling molecules participating in growth regulation, cell differentiation, apoptosis, and signal transduction [8]. It was shown that intramyocellular lipids, especially ceramide (CER), directly interfered with the insulin transduction signal pathway in the target tissues [5], which subsequently resulted in a deterioration of insulin-stimulated glucose uptake [9]. This seems to be of great importance since skeletal muscle, due to its mass, significantly contributes to the overall energy expenditure, for instance, by being responsible for nearly 80% of postprandial glucose uptake [9].
Currently, a new therapeutic approach is being sought for the prevention and treatment of obesity and coexisting disorders. The endocannabinoid system (ECS) was in the spotlight for several decades due to its well-established role in the regulation of appetite and energy expenditure [10,11]. It consists of cannabinoid receptors, CB1 and CB2, which are widespread throughout the body and located both in the central nervous system (CNS) and in the peripheral tissues (e.g., skeletal muscle, liver, adipose tissue) [12,13,14]. Cannabinoid receptors are sensitive to endogenous ligands (endocannabinoids (ECs)), mainly N-arachidonoylethanolamine (anandamide (AEA)) and 2-arachidonoylglycerol (2-AG), which are long-chain polyunsaturated fatty-acid derivatives [15]. The ECs, AEA and 2-AG, have their own metabolic routes, including enzymes responsible for their degradation: fatty acid amid hydrolase (FAAH) and monoacylglycerol lipase (MAGL), respectively [16]. Recently, new fatty-acid derivatives (more than 100), along with their corresponding molecular targets, were discovered, among which certain orphan G-protein-coupled receptors (GPCRs) like GPR55, transient receptor potential (TRP) channels like the TRP of vanilloid type-1 (TRPV1), and peroxisome proliferator activated receptors α and γ (PPARα and PPARγ) are present [17]. The above-mentioned components, cannabinoid and non-cannabinoid receptors, lipid mediators, and specific enzymes, based on recent findings, form the expanded ECS or endocannabinoidome (eCBome), which is an extension of the classic definition of the ECS [18].
Numerous studies showed that, during obesity, the ECS is overactivated; therefore, it emerges as a promising target in the treatment of obesity with a considerable physiological significance [19,20,21]. It was soon realized that cannabidiol (CBD) is a potential therapeutic agent on the grounds of its well-confirmed anti-inflammatory, anti-oxidative, anti-epileptic, anti-psychotic, and neuroprotective properties [22,23,24]. CBD is one of the most abundant and therapeutically relevant phytocannabinoids in the Cannabis plant, devoid of the psychoactive side effect [25]. So far, molecular targets involved in various therapeutic properties produced by CBD are not fully understood. Furthermore, few studies were performed in order to examine the effects of CBD with respect to obesity and its complications. Thus, the aim of the present study was to investigate whether chronic CBD administration affects the content of bioactive lipid species (e.g., CER or sphingosine-1-phosphate (S1P)), as well as insulin signal transduction, in red skeletal muscle (musculus gastrocnemius) of rats subjected to a high-fat diet (HFD) (Scheme 1). In our experimental model, we focused on the red skeletal muscle (consisting mainly of slow-twitch fibers) due to its predominant aerobic metabolism, in which a primary source of energy is based on the oxidation of glucose and FAs, as well as indicated insulin resistance [26].

Male Wistar rats (70–100 g) were purchased from the Center for Experimental Medicine of the Medical University of Bialystok, Poland. The animals were kept under controlled conditions (22 °C ± 2, 12-h/12-h light/dark cycle) with unlimited access to tap water and standard rodent chow (Labofeed B, Animal Feed Manufacturer “Morawski”, Kcynia, Poland). The study was approved by the Animal Ethics Committee in Olsztyn (No. 71/2018).
The animals were randomly assigned to four experimental groups after a period of acclimatization (seven days): (1) control group—rats fed a standard diet (kcal distribution: 12.4% of energy from fat, 57.1% from carbohydrates, and 30.5% protein), (2) CBD group—rats fed a standard diet and CBD-treated, (3) HFD group—rats fed a high-fat diet (kcal distribution: 60% of energy from fat, 20% from carbohydrates, and 20% protein), and (4) HFD + CBD group—rats fed a high-fat diet and CBD-treated. The total time course of feeding rats either standard chow or a high-fat diet lasted seven weeks, and each experimental group consisted of 10 rats. Starting from the fifth week, simultaneously with the respective diet, the rats received injections of CBD or its vehicle for the next two weeks of the experiment. Rats fed both a standard diet and an HFD were injected intraperitoneally (i.p.) with synthetic CBD (purity: ≥99%; THC Pharm GmbH, Frankfurt, Germany) in a dose of 10 mg/kg of body mass (3:1:16, ethanol, Tween-80, and 0.9% NaCl), and corresponding control and HFD groups received the vehicle once a day consecutively for 14 days. Twenty-four hours after the last dose of CBD or its solvent, rats from control groups, as well as HFD-fed groups, were anaesthetized by intraperitoneal injection of pentobarbital (80 mg/kg body mass). Muscle samples (red musculus gastrocnemius with oxidative metabolism) were collected, and visible fatty tissue was mechanically removed. Subsequently, the samples were immediately frozen using aluminum tongs precooled in liquid nitrogen and stored at −80 °C until further analyses. Blood samples were obtained through inferior vena cava puncture and collected into heparinized tubes and centrifuged; then, plasma was separated.

The intramuscular glycogen content was determined using a colorimetric method (Glycogen Colorimetric Assay Kit II, BioVision Inc., Milpitas, CA, USA) according to the manufacturer’s protocol. Briefly, skeletal muscle samples were homogenized in double-distilled water; subsequently, tissues were boiled in order to inactivate enzymes and then centrifuged. Appropriate reagents were added to the collected supernatants and, after 30 minutes of incubation at room temperature. the absorbance of glycogen products was measured in a hybrid multi-mode microplate reader (Synergy H1TM, BioTek Instruments, Winooski, VT, USA). Calculated values were based on a standard curve, and glycogen concentration was expressed in micrograms per microliter.

The contents of ceramide (CER), sphinganine (SFA), sphingosine (SFO), sphinganine-1-phosphate (SFA1P), and sphingosine-1-phosphate (S1P) in the skeletal muscle samples were measured by the means of high-performance liquid chromatography (HPLC), as previously reported [27]. In brief, tissues were homogenized, and lipids were extracted by the addition of chloroform. The lipid extracts were transferred to a fresh tube with pre-added 40 pmol of N-palmitoyl-d-erythro-sphingosine (C17 base) as an internal standard. Afterward, the samples were washed with alkaline water to form deacylate ceramide. The obtained lipid residues released from ceramide were converted to their o-phthalaldehyde derivatives and analyzed using the HPLC system (PROSTAR; Varian Inc. (Palo Alto, CA, USA)) equipped with a fluorescence detector and C18 reversed-phase column (Varian Inc. OmniSpher 5, 4.6 × 150 mm).

All results are expressed as mean values ± SD. The data were subjected to the Shapiro–Wilk test and Bartlett’s test to assess the distribution of values and homogeneity of the variance. Statistical differences between groups were determined based on the results of one-way ANOVA followed by an appropriate post hoc test using GraphPad Prism version 7.0 for Windows (GraphPad Software, La Jolla, CA, USA). Results were considered to be statistically significant at p < 0.05.

3.1. Effect of Chronic CBD Administration on Plasma Glucose and Insulin Concentrations, as Well as HOMA-IR, in Rats Subjected to Standard and High-Fat Diets

Our study demonstrated a pronounced decrease in plasma glucose level in the CBD group (−11.9%, p < 0.05; Table 1) compared to the control rats. Moreover, we noticed that both HFD-fed groups (untreated and treated with CBD) exhibited a significantly increased concentration of insulin (+89.9% and +45.2%, p < 0.05; Table 1, respectively) and considerably increased HOMA-IR index (+59.9% and +39.0%, p < 0.05; Table 1, respectively) in comparison with the control group. Importantly, we observed that two-week CBD treatment caused a substantial reduction in insulin concentration in the HFD group (−23.5%, p < 0.05; Table 1 vs. HFD group). Even though, chronic CBD administration decreased the HOMA-IR value in the HFD group compared to the corresponding untreated HFD group, the difference did not reach a significant level (−13.0%, p > 0.05; Table 1).

3.3. Effect of Long-Term CBD Administration on the Total Intramuscular Expression of Proteins Involved in the Sphingolipid Metabolism in Rats Fed Standard and High-Fat Diets

3.4. Effect of Chronic CBD Administration on the Total Expression and Phosphorylation of Insulin Pathway Proteins, Glucose Transporters, and Glycogen Content in Skeletal Muscle of Rats Fed Standard and High-Fat Diets

3.5. Effect of Chronic CBD Administration on the Total Intramuscular Protein Expression of Endocannabinoid System Components in Rats Subjected to Standard and High-Fat Diets

In summary, our data provide new insight into the mechanism of cannabidiol action at the cellular level in skeletal muscle. We reported, for the first time, that chronic CBD treatment. on the one hand, prevented intramyocellular accumulation of CER and SFA, but, on the other hand, elevated S1P in FA oversupply in a diet. Moreover, we found that CBD improves downstream insulin signaling and the oxidative metabolism of glucose, while it restores glycogen depletion in myocytes during high-fat feeding. Furthermore, taking into consideration some limitations of the study, it seems that a two-week CBD treatment is too short to markedly diminish whole-body IR in obese subjects. Nevertheless, a two-week CBD treatment is enough to effectively inhibit the de novo ceramide synthesis pathway, thereby reducing lipotoxicity and provoking an insulin-sensitizing effect in the myocytes.

The following are available online at https://www.mdpi.com/2218-273X/10/9/1241/s1: Figure S1. Representative Western blots showing the ratio of the total expression of phosphorylated and unphosphorylated proteins involved in the insulin signaling pathway. 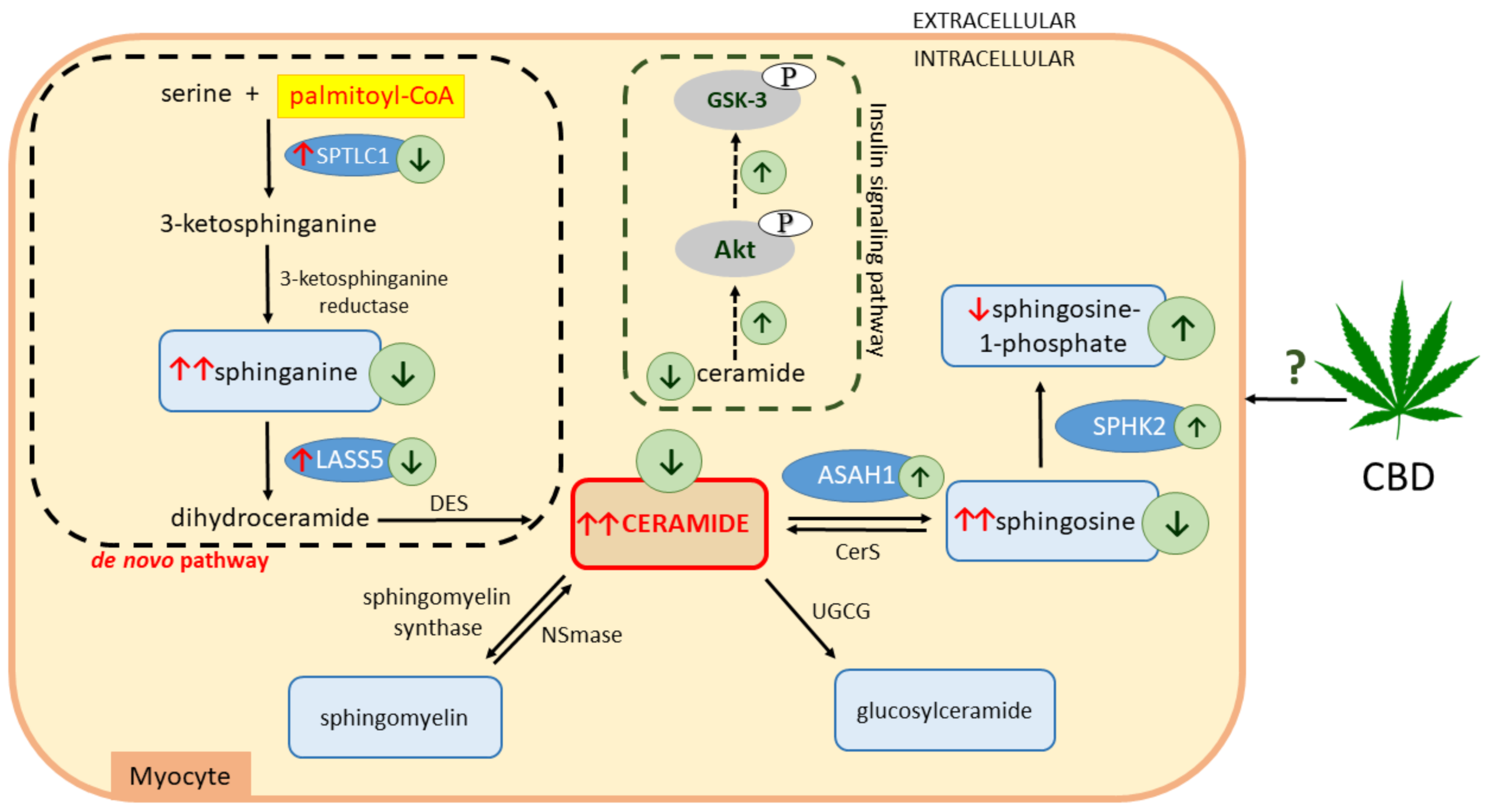 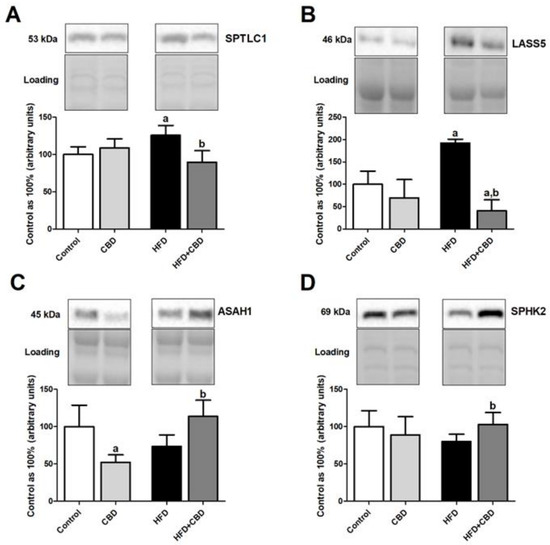 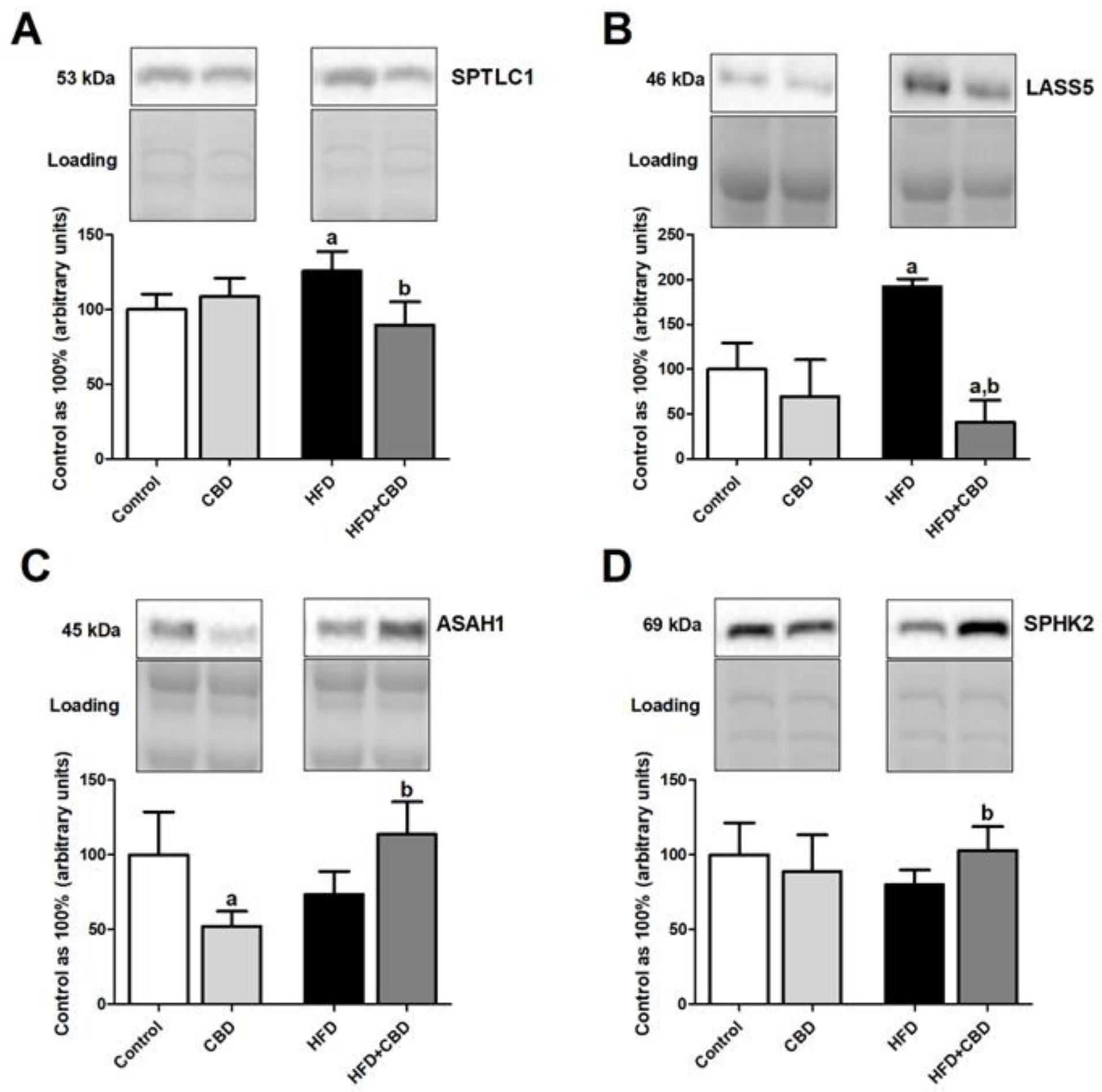 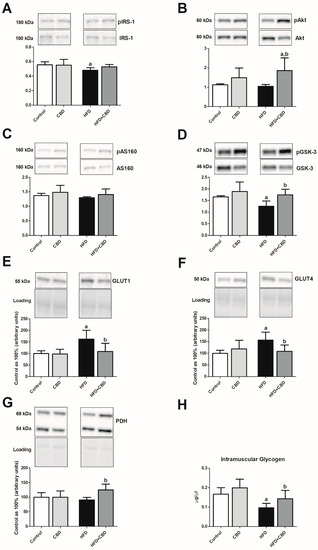