Parkinson’s disease (PD) is the second most common neurodegenerative disease worldwide, being largely characterized by motor features. MicroRNAs (miRNAs) are small non-coding RNAs, whose deregulation has been associated with neurodegeneration in PD. In this study, miRNAs targeting cell death and/or inflammation pathways were selected and their expression compared in the serum of PD patients and healthy controls. We used two independent cohorts (discovery and validation) of 20 idiopathic PD patients (iPD) and 20 healthy controls each. We also analyzed an additional group of 45 patients with a mutation in the leucine-rich repeat kinase 2 (LRRK2) gene (LRRK2-PD). miRNA expression was determined using Taqman qRT-PCR and their performance to discriminate between groups was assessed by receiver operating characteristic (ROC) curve analysis. We found miR-146a, miR-335-3p, and miR-335-5p downregulated in iPD and LRRK2-PD patients versus controls in both cohorts. In addition, miR-155 was upregulated in LRRK2-PD compared to iPD patients showing an appropriate value of area under the ROC curve (AUC 0.80) to discriminate between the two groups. In conclusion, our study identified a panel of inflammatory related miRNAs differentially expressed between PD patients and healthy controls that highlight key pathophysiological processes and may contribute to improve disease diagnosis. View Full-Text
Keywords: inflammatory miRNAs; LRRK2; Parkinson’s disease; serum miRNAs inflammatory miRNAs; LRRK2; Parkinson’s disease; serum miRNAs
►▼ Show Figures 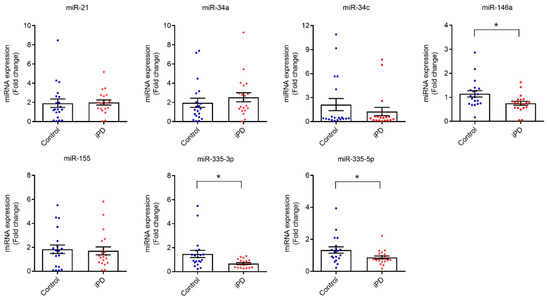