The Effect of Chronic Methamphetamine Treatment on Schizophrenia Endophenotypes in Heterozygous Reelin Mice: Implications for Schizophrenia

Reelin has been implicated in the development of schizophrenia but the mechanisms involved in this interaction remain unclear. Chronic methamphetamine (Meth) use may cause dopaminergic sensitisation and psychosis and has been proposed to affect brain dopamine systems similarly to changes seen in schizophrenia. We compared the long-term effect of chronic Meth treatment between heterozygous reelin mice (HRM) and wildtype controls (WT) with the aim of better understanding the role of reelin in schizophrenia. Meth pretreatment induced sensitisation to the effect of an acute Meth challenge on locomotor activity, but it had no effect on baseline PPI or sociability and social preference. In all behavioural models, HRM did not significantly differ from WT at baseline, except spontaneous exploratory locomotor activity which was higher in HRM than WT, and sociability which was enhanced in HRM. Locomotor hyperactivity sensitisation was not significantly different between HRM and WT. Chronic Meth treatment reduced spontaneous locomotor activity to the level of WT. No deficits in PPI or social behaviour were induced by chronic Meth pretreatment in either strain. In conclusion, these data do not support a role of reelin in schizophrenia, at least not in HRM and in the methamphetamine sensitisation model. View Full-Text
Keywords: reelin; psychosis; methamphetamine; sensitization; dopamine; social behaviour; prepulse inhibition reelin; psychosis; methamphetamine; sensitization; dopamine; social behaviour; prepulse inhibition
►▼ Show Figures 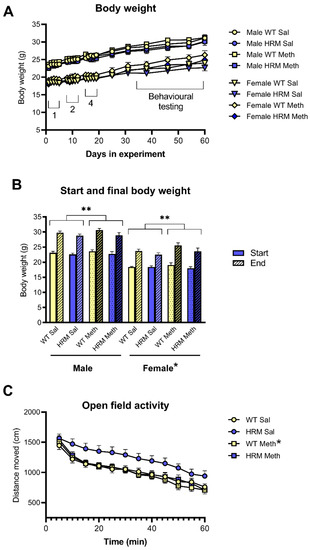