While the role of hypoxia and the induction of the hypoxia inducible factors (HIFs) and the unfolded protein response (UPR) pathways in the cancer microenvironment are well characterized, their roles and relationship in normal human endothelium are less clear. Here, we examined the effects of IRE1 on HIF-1α protein levels during hypoxia in primary human umbilical vein endothelial cells (HUVECs). The results demonstrated that HIF-1α levels peaked at 6 h of hypoxia along with two of their target genes, GLUT1 and VEGFA, whereas at up to 12 h of hypoxia the mRNA levels of markers of the UPR, IRE1, XBP1s, BiP, and CHOP, did not increase, suggesting that the UPR was not activated. Interestingly, the siRNA knockdown of IRE1 or inhibition of IRE1 endonuclease activity with 4µ8C during hypoxia significantly reduced HIF-1α protein without affecting HIF1A mRNA expression. The inhibition of the endonuclease activity with 4µ8C in two other primary endothelial cells during hypoxia, human cardiac microvascular endothelial cells and human aortic endothelial cells showed the same reduction in the HIF-1α protein. Surprisingly, the siRNA knockdown of XBP1s during hypoxia did not decrease the HIF1α protein levels, indicating that the IRE1-mediated effect on stabilizing the HIF1α protein levels was XBP1s-independent. The studies presented here, therefore, provide evidence that IRE1 activity during hypoxia increases the protein levels of HIF1α in an XBP1s-independent manner. View Full-Text
Keywords: RIDD; HIF1A; XBP1; ERN1; hypoxia RIDD; HIF1A; XBP1; ERN1; hypoxia
►▼ Show Figures 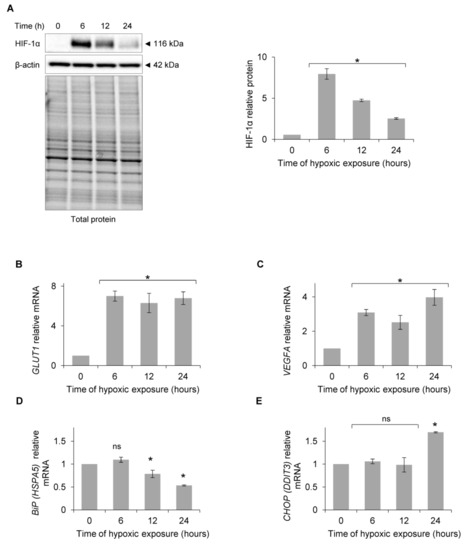