The Genoprotective Role of Naringin

Since ancient times, fruits and edible plants have played a special role in the human diet for enhancing health and maintaining youthfulness. The aim of our work was to determine the interactions between naringin, a natural ingredient of grapefruits, and DNA using an electrochemical biosensor. Electrochemical methods allow analyzing the damages occurring in the structure of nucleic acids and their interactions with xenobiotics. Our study showed that the changes in the location of electrochemical signals and their intensity resulted from the structural alterations in DNA. The signal of adenine was affected at lower concentrations of naringin, but the signal of guanine was unaffected in the same condition. The dynamics of changes occurring in the peak height and surface of adenine related to naringin concentration was also significantly lower. The complete binding of all adenine bases present in the tested double-stranded DNA solution was observed at naringin concentrations ranging from 8.5 to 10.0 µM. At larger concentrations, this active compound exerted an oxidizing effect on DNA. However, the critical concentrations of naringin were found to be more than twice as high as the dose absorbable in an average human (4 µM). The results of our work might be helpful in the construction of electrochemical sensors for testing the content of polyphenols and would allow determining their genoprotective functionality. View Full-Text
Keywords: naringin; DNA; reactive oxygen species; electrochemical DNA biosensor; square-wave voltammetry naringin; DNA; reactive oxygen species; electrochemical DNA biosensor; square-wave voltammetry
►▼ Show Figures 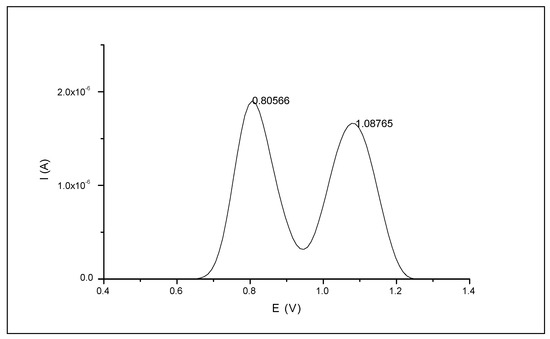