Involvement of Metabolic Lipid Mediators in the Regulation of Apoptosis

The vitamin D receptor (VDR) must be relevant to liver lipid metabolism because VDR deficient mice are protected from hepatosteatosis. Therefore, our objective was to define the role of VDR on the overall lipid metabolism in human hepatocytes. We developed an adenoviral vector for human VDR and performed transcriptomic and metabolomic analyses of cultured human hepatocytes upon VDR activation by vitamin D (VitD). Twenty percent of the VDR responsive genes were related to lipid metabolism, including MOGAT1, LPGAT1, AGPAT2, and DGAT1 (glycerolipid metabolism); CDS1, PCTP, and MAT1A (phospholipid metabolism); and FATP2, SLC6A12, and AQP3 (uptake of fatty acids, betaine, and glycerol, respectively). They were rapidly induced (4–6 h) upon VDR activation by 10 nM VitD or 100 µM lithocholic acid (LCA). Most of these genes were also upregulated by VDR/VitD in mouse livers in vivo. Ultra-performance liquid chromatography-tandem mass spectrometry (UPLC-MS) metabolomics demonstrated intracellular accumulation of triglycerides, with concomitant decreases in diglycerides and phosphatidates, at 8 and 24 h upon VDR activation. Significant alterations in phosphatidylcholines, increases in lyso-phosphatidylcholines and decreases in phosphatidylethanolamines and phosphatidylethanolamine plasmalogens were also observed. In conclusion, active VitD/VDR signaling in hepatocytes triggers an unanticipated coordinated gene response leading to triglyceride synthesis and to important perturbations in glycerolipids and phospholipids. View Full-Text
Keywords: human hepatocytes; lipid metabolism; vitamin D; vitamin D receptor human hepatocytes; lipid metabolism; vitamin D; vitamin D receptor
►▼ Show Figures 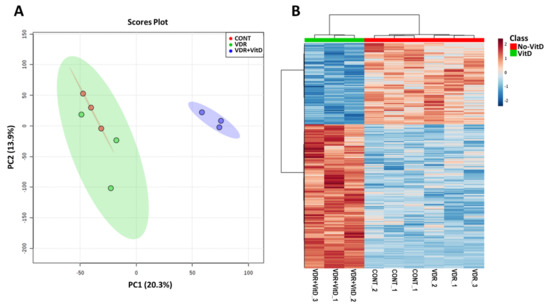