Diabetic nephropathy (DN) is one of the most important complications of diabetes, and the leading cause of end-stage renal disease (ESRD). While Chromium picolinate (CrPic) supplementation has been found to be effective in treating diabetes, its effects on diabetic-induced nephropathy have not been studied. Therefore, in this study, CrPic (1 mg kg−1 d−1) was administered to a DN rat model by oral gavage for eight weeks to investigate its effects. The results show that CrPic supplementation caused a decrease in levels of blood glucose, serum insulin, blood urea nitrogen (BUN), serum creatinine, and urinary albumin in DN rats. It also reversed renal pathological changes, including renal glomerular sclerosis and interstitial fibrosis. In addition, the oxidative defense system in the kidneys of DN rats was found to be improved; the biological activities of superoxide dismutase (SOD), catalase (CAT), and glutathione peroxidase (GPX) increased; and the content of malondialdehyde (MDA) lowered. Immunohistochemical results reveal that the expression levels of renal transforming growth factor-β1 (TGF-β1), Smad 2, and Smad 3 decreased significantly in the kidneys of rats in the CrPic-treated group. CrPic administration was thus found to ameliorate diabetic nephropathy in SD rats via an antioxidative stress mechanism, as well the ability to inhibit TGF-β1/Smad2/3 expression. This study suggests that CrPic could be a potential renal-protective nutrient against diabetic nephropathy. View Full-Text
Keywords: diabetic nephropathy; chromium picolinate; renal fibrosis; antioxidative stress diabetic nephropathy; chromium picolinate; renal fibrosis; antioxidative stress
►▼ Show Figures 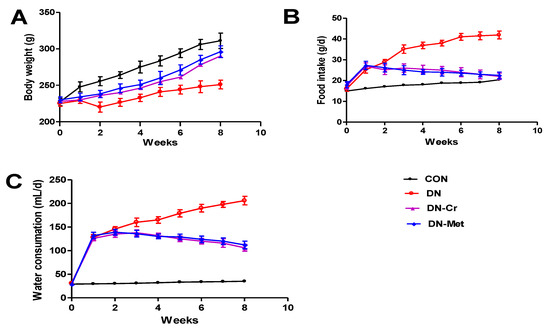