Obesity is characterized by the excessive deposition of fat that may interfere with the normal metabolic process of the body. It is a chronic condition associated with various metabolic syndromes, whose prevalence is grossly increasing, and affects both children and adults. Accumulation of excessive macronutrients on the adipose tissues promotes the secretion and release of inflammatory mediators, including interleukin-6 (IL-6), interleukin 1β, tumor necrotic factor-α (TNF-α), leptin, and stimulation of monocyte chemoattractant protein-1 (MCP-1), which subsequently reduce the production of adiponectin thereby initiating a proinflammatory state. During obesity, adipose tissue synthesizes and releases a large number of hormones and cytokines that alter the metabolic processes, with a profound influence on endothelial dysfunction, a situation associated with the formation of atherosclerotic plaque. Endothelial cells respond to inflammation and stimulation of MCP-1, which is described as the activation of adhesion molecules leading to proliferation and transmigration of leukocytes, which facilitates their increase in atherogenic and thromboembolic potentials. Endothelial dysfunction forms the cornerstone of this discussion, as it has been considered as the initiator in the progression of cardiovascular diseases in obesity. Overexpression of proinflammatory cytokines with subsequent reduction of anti-inflammatory markers in obesity, is considered to be the link between obesity-induced inflammation and endothelial dysfunction. Inhibition of inflammatory mechanisms and management and control of obesity can assist in reducing the risks associated with cardiovascular complications. View Full-Text
Keywords: obesity; adipose tissue; inflammation; atherosclerosis; endothelial dysfunction obesity; adipose tissue; inflammation; atherosclerosis; endothelial dysfunction
►▼ Show Figures 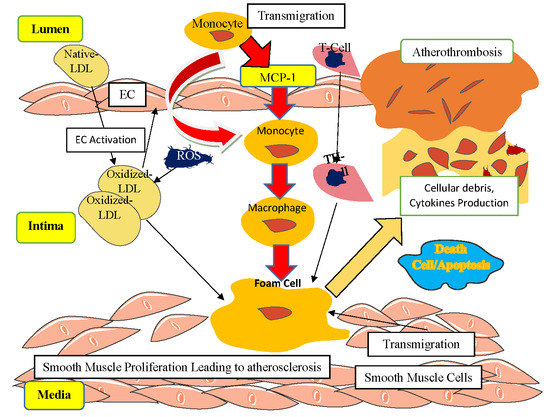