The increasing detection of infections of Trypanosoma cruzi, the etiological agent of Chagas disease, in non-endemic regions beyond Latin America has risen to be a major public health issue. With an impact in the millions of people, current treatments rely on antiquated drugs that produce severe side effects and are considered nearly ineffective for the chronic phase. The minimal progress in the development of new drugs highlights the need for advances in basic research on crucial biochemical pathways in T. cruzi to identify new targets. Here, we report on the T. cruzi presenilin-like transmembrane aspartyl enzyme, a protease of the aspartic class in a unique phylogenetic subgroup with T. vivax separate from protozoans. Computational analyses suggest it contains nine transmembrane domains and an active site with the characteristic PALP motif of the A22 family. Multiple linear B-cell epitopes were identified by SPOT-synthesis analysis with Chagasic patient sera. Two were chosen to generate rabbit antisera, whose signal was primarily localized to the flagellar pocket, intracellular vesicles, and endoplasmic reticulum in parasites by whole-cell immunofluorescence. The results suggest that the parasitic presenilin-like enzyme could have a role in the secretory pathway and serve as a target for the generation of new therapeutics specific to the T. cruzi. View Full-Text
Keywords: Trypanosoma cruzi; presenilin; aspartic protease; SPOT-synthesis; anti-peptide antibodies; immunolocalization; transmembrane domains Trypanosoma cruzi; presenilin; aspartic protease; SPOT-synthesis; anti-peptide antibodies; immunolocalization; transmembrane domains
►▼ Show Figures 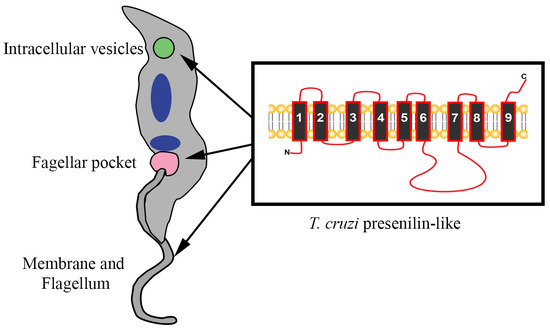