Heavily Armed Ancestors: CRISPR Immunity and Applications in Archaea with a Comparative Analysis of CRISPR Types in Sulfolobales

Prokaryotes are constantly coping with attacks by viruses in their natural environments and therefore have evolved an impressive array of defense systems. Clustered Regularly Interspaced Short Palindromic Repeats (CRISPR) is an adaptive immune system found in the majority of archaea and about half of bacteria which stores pieces of infecting viral DNA as spacers in genomic CRISPR arrays to reuse them for specific virus destruction upon a second wave of infection. In detail, small CRISPR RNAs (crRNAs) are transcribed from CRISPR arrays and incorporated into type-specific CRISPR effector complexes which further degrade foreign nucleic acids complementary to the crRNA. This review gives an overview of CRISPR immunity to newcomers in the field and an update on CRISPR literature in archaea by comparing the functional mechanisms and abundances of the diverse CRISPR types. A bigger fraction is dedicated to the versatile and prevalent CRISPR type III systems, as tremendous progress has been made recently using archaeal models in discerning the controlled molecular mechanisms of their unique tripartite mode of action including RNA interference, DNA interference and the unique cyclic-oligoadenylate signaling that induces promiscuous RNA shredding by CARF-domain ribonucleases. The second half of the review spotlights CRISPR in archaea outlining seminal in vivo and in vitro studies in model organisms of the euryarchaeal and crenarchaeal phyla, including the application of CRISPR-Cas for genome editing and gene silencing. In the last section, a special focus is laid on members of the crenarchaeal hyperthermophilic order Sulfolobales by presenting a thorough comparative analysis about the distribution and abundance of CRISPR-Cas systems, including arrays and spacers as well as CRISPR-accessory proteins in all 53 genomes available to date. Interestingly, we find that CRISPR type III and the DNA-degrading CRISPR type I complexes co-exist in more than two thirds of these genomes. Furthermore, we identified ring nuclease candidates in all but two genomes and found that they generally co-exist with the above-mentioned CARF domain ribonucleases Csx1/Csm6. These observations, together with published literature allowed us to draft a working model of how CRISPR-Cas systems and accessory proteins cross talk to establish native CRISPR anti-virus immunity in a Sulfolobales cell. View Full-Text
Keywords: CRISPR; archaea; type III; sulfolobales; cOA-signaling; viruses; CRISPR model organisms; CRISPR applications CRISPR; archaea; type III; sulfolobales; cOA-signaling; viruses; CRISPR model organisms; CRISPR applications
►▼ Show Figures 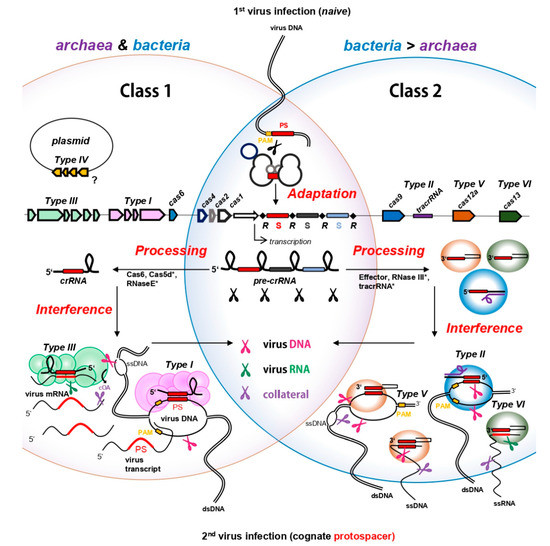